July marks the 100th anniversary of the beginning of the First World War. Here's what investors can learn from this horrific catastrophe. 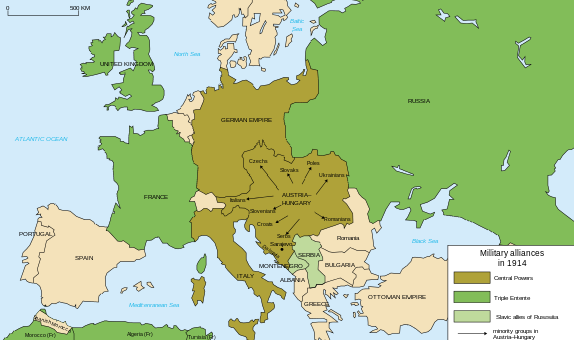 On June 28, 1914, Archduke Franz Ferdinand was assassinated by a Bosnian Serb in the city of Sarajevo. The First World War followed thirty-seven days later, resulting in the deaths of 20 million soldiers and civilians. It may not be possible to overstate the impact of this devastating event on world history.

In The Sleepwalkers: How Europe Went to War in 1914, Christopher Clark shows how European monarchs, politicians, soldiers, and diplomats "walked toward danger in watchful, calculated steps." This tragic story provides numerous insights for those of us who hope to learn from one of the greatest catastrophes of modern times. As we commemorate the 100th anniversary of the outbreak of the war, I thought it might be useful to explore four possible lessons for investors.

1. Avoid huge bets where the probabilities of failure are unknown.
After the assassination of Franz Ferdinand, Austria-Hungary's leaders issued a harsh ultimatum to Serbia, which had to either accept it or face war. Noting that neither side intended to back down, a French diplomat wrote,

On both sides they imagined 'bluffing' would suffice to achieve success. None of the players thought that it would be necessary to go all the way. The tragic poker game had begun.

Clark shows how Austria-Hungary was intent on taking a "temperamental, intuitive leap" in order to protect its future as a great power. Its leaders knew this policy risked a wider European war, yet they went ahead anyway, even though the outcome of such a war was unknown. As we now know, the war brought about the utter collapse of Austria-Hungary, as well as the demise of both the German and Russian empires.

We witnessed similarly reckless behavior during the recent financial crisis. Major financial firms like Lehman Brothers and AIG risked everything by taking on huge exposures in mortgage-related securities. As the Financial Crisis Inquiry Commission wrote, "Like Icarus, they never feared flying ever closer to the sun."

Of course, ordinary Americans also gambled heavily prior to the crisis by taking on more debt than they could possibly handle. As a general rule, individual investors and institutions should avoid making decisions where the probability of a disastrous outcome is real, but unknown. Violating that rule was one of the biggest mistakes made by the decision-makers in the run-up to the First World War in July 1914.

2. Systemic risk is hard to assess and difficult to manage.
Clark makes a persuasive case that war was not inevitable in the summer of 1914. The international diplomatic system had faced similar crises in the past, and it was reasonable to assume that the situation would eventually be resolved peacefully.

In July 1914, the international system ended up failing completely, however, and a horrific war ensued. War actually caught global financial markets by surprise. In the days after Austria's ultimatum, panic raged throughout the international financial system. By the end of the first week of August 1914, almost all of the world's securities exchanges were closed. The London Stock Exchange, which had never closed before, remained shuttered until January 1915. The New York Stock Exchange was closed from Aug. 1 until December 1914.

It's not easy for individual investors to anticipate the collapse of a financial system. Almost overnight, our portfolios can be decimated and our property values can plunge dramatically. The First World War -- like Sept. 11 or the financial crisis of 2008 -- shows us that "black swan" events are very real and hard to predict. Diversifying across asset classes and having a long-term outlook are two possible approaches to systemic risk. In general, investors must accept the fact that catastrophic events can happen at any time and can wreak havoc on even the most well-planned portfolio.

3. Seemingly rational leaders can make irrational decisions.
Clark provides an odd quote from Winston Churchill that illustrates the madness surrounding the decision to go to war. Just days before Britain's entry into the conflict, First Sea Lord Churchill wrote to his wife, "Everything tends toward catastrophe & collapse. I am interested, geared-up and happy."

The decision-makers in 1914 appeared to be responsible, prudent statesmen, but many of them were unable to see the situation clearly. They often perceived their own nation's security in purely defensive terms, while viewing their rivals as aggressors. This allowed the German military leadership, for example, to think of a preventive war against Russia as a perfectly rational strategy to contain their fast-growing rival. And this led Britain to eventually enter the war on the side of France and Russia, despite not having a clearly defined interest in the Balkans.

This type of "irrational" decision-making by leaders is always a huge risk for investors. The case of GM is a good example. The inability of GM's leadership to adequately deal with the faulty ignition switch problem led to devastating consequences. A recent internal investigation concluded that, "GM personnel's inability to address the ignition switch problem for over 11 years is a history of failures." In the political realm, recent showdowns over the debt limit show how leaders on both sides of the aisle were willing to risk another financial crisis in order to gain short-term political advantage.

4. A catastrophe can have long-term, incalculable effects.
After the decision to go to war with Germany, Britain's Foreign Secretary Sir Edward Grey famously remarked, "The lamps are going out all over Europe. We shall not see them lit again in our lifetime."

Grey's words were prescient. Four years later after the deaths of 20 million people and the collapse of three empires, the world remained a very dangerous place. Eventually, the rise of Stalin in post-tsarist Russia and Hitler in post-imperial Germany resulted in another disastrous catastrophe just over 20 years later. For over three decades, Europe was torn apart by war, revolution, and economic dislocation. A young household in Europe in 1913 would have had a very grim future ahead of it, regardless of how diligent its members worked or saved.

Successful investors tend to be optimistic about the future, and such an attitude has richly rewarded Americans over the past 100 years. The First World War, however, reminds us of how precarious civilization actually is. In 1914, Germany was one of the most advanced societies in the world. Three decades later it was literally a smoking ruin. And just a century ago, Britain was the global financial leader with an empire upon which the sun never set -– the First World War would mark the beginning of Britain's relative economic decline.

We were extremely lucky recently that our financial crisis did not result in even greater economic and financial hardship. Even with the upturn in the stock market, however, there remains some serious challenges with long-term unemployment and stagnating wage growth. And just because the textbooks say that investors can earn 10% from equities, year in and year out, does not mean that's a certainty.

Catastrophic events are always possible, and even the wisest investors will struggle to withstand their worst effects. If the First World War teaches us anything, it's that each of us has a stake in holding our business and political leaders accountable for the quality of their decision-making.

What Investors Can Expect as Fed Rate Hikes Slow

These 2 Nasdaq SaaS Stocks Are Alive and Well
370%