Spending on home improvement projects fell almost 2% in May while private construction spending was down 1.5%. "The recent flattening out in housing activity could prove more protracted than currently expected rather than resuming its earlier pace of recovery," said Federal Reserve Chair Janet Yellen in May . She continued by warning that housing activity has been disappointing this year and "will bear watching."

But housing activity does not exist in a bubble.

The share prices of companies like Lowe's Companies (NYSE:LOW) and Home Depot (NYSE:HD) tend to follow the same route as US construction spending, as shown in the chart below: 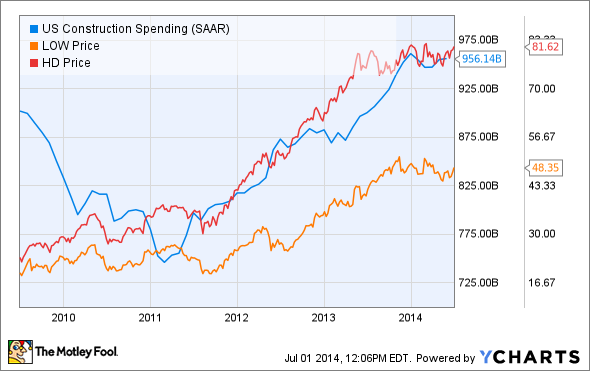 Solid Financials But Missing a Market
Home Depot is currently trading at $81.64 per share with a one target estimate of $90.06, but if construction spending is going to remain flat the company may be more likely to stay in its 52-week range of $72.21 to $83.20. The company also boasts building return on equity and strong net income growth . With a price to earnings ratio of 20.76 , Home Depot is priced lower than others in the Home Improvement Stores industry (which carries an average P/E of 27.92) and its revenue growth has outpaced the industry average; but even with strong reasons to be optimistic about the company it has underperformed the S&P 500 so far this year. In other words, the company may be solid but its market is contracted, so expecting the company's share price to increase by 10% over the next year could be a bit optimistic.

Lowes is in a similar position. The company is trading at $48.37 on a 52-week range of $40.95 to $52.08 and it carries a one-year target estimate of $52.13, or a little less than 10% higher than its current share price. Also, like Home Depot, Lowes is priced low compared to its rivals, at just 21.36 times its earnings, and its revenue growth has also outpaced its peers . On top of all this, Lowes has a strong profit margin of 35.5% and its net operating cash flow has been consistent, but it faces the same issue as Home Depot-the market just isn't there.

Share prices have roughly doubled for both Home Depot and Lowes over the past three years. 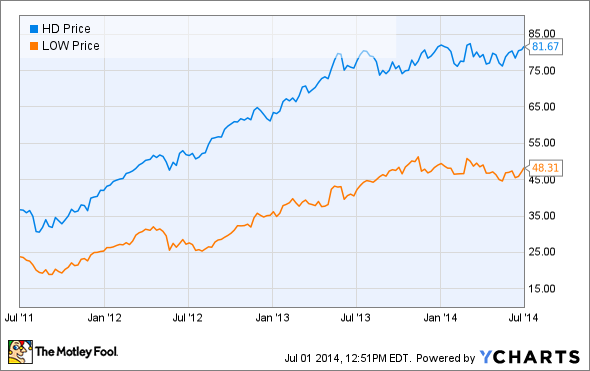 Takeaway
It may not be fair to think that the market won't be there long enough for these companies to make solid long positions, but for as much as their share prices have increased, they have also been level for the last year. If housing activity doesn't rebound, or the economy takes another dive, its going to show on their share prices.

Home Depot and Lowes are both well-run companies, and their financials back that up, but the question isn't whether the companies are worth their share prices-the question is whether you are going to be able to see the sort of returns you want in your investment horizon.