Oh, how things can change over the course of three decades. After co-founding Apple (NASDAQ:AAPL), Steve Jobs made no attempts to hide his disdain for IBM (NYSE:IBM)

Since then, Apple came back from the dead to become the most powerful -- and most valuable -- consumer electronics company on the planet, while Big Blue sold off its PC operations to Lenovo, and shifted its attention away from the consumer market toward enterprise and big data analytics. The two companies no longer directly compete as they did in Jobs' days, and have just announced a major partnership that leverages their complementary strengths.

Make no mistake... this deal is a game changer.

A look at the partnership
The new partnership will encompass various aspects. IBM will help develop more than 100 industry-specific native apps for enterprise deployment, and optimize its cloud services for iOS devices. That includes industries such as retail, health care, banking, travel, and telecommunications, among others. Apple will also introduce a new service tier for AppleCare specifically for the enterprise.

In an interview with CNBC, both Tim Cook and IBM CEO Ginni Rometty elaborated on the deal's potential. Rometty said that the partnership will drive growth for both companies, and that Apple and IBM have long discussed remaking businesses and reimagining the enterprise for a mobile world. Meanwhile, IBM can help address what she considers the No. 1 inhibitor to widespread adoption: security.

On the last conference call, Tim Cook noted that 91% of enterprise tablet activations are iPads. Cook was also optimistic about Microsoft's decision to bring Office for iPad, because that also strengthens the iPad's productivity capabilities. Still, Cook notes that overall mobile penetration within the enterprise remains relatively low, which indicates that Apple still has a huge opportunity here. 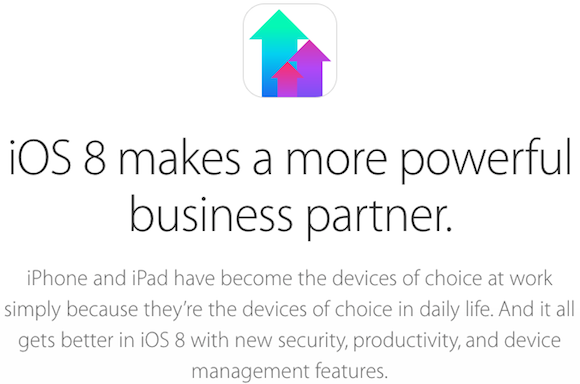 iOS 8 in the enterprise. Source: Apple.

Apple never used to target the enterprise directly, in part because the user (the employee) and the person making the purchasing decision (IT managers) were not the same. Apple has always preferred to directly target the user, which is why it typically goes after the mainstream consumer market.

The BYOD movement helped change that in a big way and, all of a sudden, the enterprise market has become an important opportunity for the Mac maker. Apple has been adding enterprise features to iOS since 2008, a trend that will continue with iOS 8. But Apple's strategy with software releases is major version updates each year with a handful of new features.