When Tesla Motors (NASDAQ:TSLA) attempted to use Model E as the name for its planned "affordable car," aiming to complete the three-letter-word combination it would form with its Model S luxury sedan and the Model X crossover SUV, Ford objected. But have no fear, Tesla has a solution: the Model 3.

While Tesla's Model 3 is still several years out, investors are certainly already thinking about the car. Not doing so would be a big mistake, since the lower-priced car will likely elicit far greater demand than the pricey Model S. Here are the latest details investors need to know about the car, along with the backstory on Tesla's thinking for the Model 3 name.

How the vehicle was named
Ford, who has the rights to the Model E name, sued Tesla when the company tried to use the name for the electric-car maker's most affordable car yet.

"Ford's trying to kill sex! So we'll have to think of another name," Tesla Chief Executive Officer Elon Musk told Auto Express in an interview. But Tesla found a workaround. "The new model is going to be called Model 3, we'll have three bars to represent it and it'll be S III X. The three bars resemble the E used in Tesla's logo already.

Model 3 details
Most of the information surrounding the Model 3 that Musk emphasized during the interview was old news. But a few new tidbits have surfaced recently.

Contrary to a recent statement during Tesla's annual shareholder meeting that the car would hopefully launch by late 2016, Auto Express asserts that the Model 3 is "set to be unveiled in 2016 and on sale by 2017." But even this isn't much of a surprise, when Tesla usually mentions the Model 3, 2017 is the most commonly cited time frame for launch. However, the latest update from Auto Express, based on its exclusive interview with Musk, makes 2017 look more likely than ever.

Other new information to surface on the Model 3 came earlier this month when AutoCar magazine revealed that the Model 3 will not be built using aluminum the way the Model S is. To be more cost effective, Tesla vice president of engineering Chris Porritt suggests the car will be built with steel:

I expect there will be very little carry-over. We've got to be cost-effective. We can't use aluminum for all the [small car's] components.

AutoCar's Hilton Holloway concludes that this means the Model 3 will use mostly steel for the body, though "it will probably use bonding and rivets in its construction."

The Auto Express interview with Musk confirmed previous details about the Model 3, including that the car will be about 20% smaller, priced around $35,000, and have range over 200 miles "with strong performance."

Tesla is incredibly bullish on the Model 3, comparing it with the BMW 3 Series, which sold 500,314 units worldwide in 2013. Musk told Auto Express that the Model 3 will help Tesla's deliveries soar well into the six figures by the end of the decade. Tesla has said before that it plans for total vehicle sales to reach 500,000 vehicles per year by 2020, based on plans outlined for its Gigafactory -- a huge jump from guidance for 35,000 Model S deliveries this year. 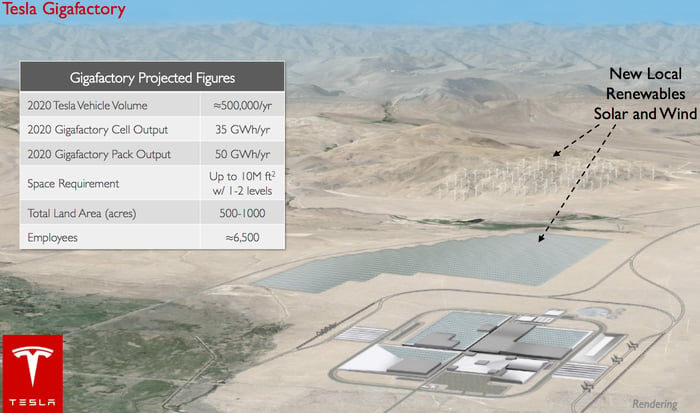 Tesla's planned Gigafactory, the world's largest lithium-ion battery factory, is a precursor to the Model 3. The company is taking the factory's construction so seriously that it says it will break ground on multiple sites even though it may only select one location for the final Gigafactory. Tesla says it is doing this to risk delays.

If Tesla can pull off the execution of the Gigafactory and the Model 3, the company could soon hold a well-positioned spot as a mass-market manufacturer next to the big dawgs.