THL Credit, (NASDAQ:TCRD) reports earnings about a month from today, and it may bring some bad news for the dividend. 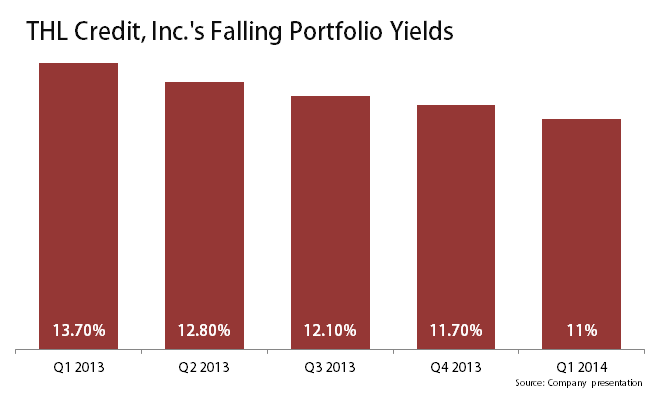 Part of this has to do with the company's growing proportion of second- and first-lien securities. But it's also part of a larger trend: falling BDC yields across the board. Easy money has made it possible for middle-market borrowers to refinance time and time again.

But that's a market problem. Other problems are THL Credit-specific and, generally, more concerning. 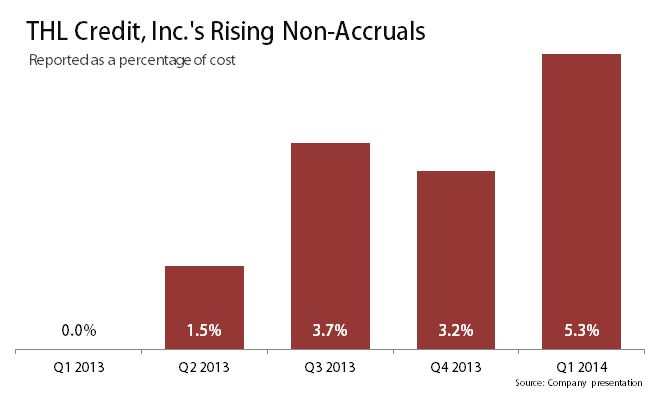 Do note that THL Credit is a relatively new BDC. To have such a high nonaccrual rate during a recovery -- from investments that were underwritten in a postfinancial-crisis world, no less -- is lackluster performance. And problems with any credit are only magnified by THL Credit's use of leverage, which last sat at about 0.7 times equity.

No free lunch
Boosting portfolio yields from here requires one of two trade-offs. THL Credit can continue to leverage up, but with investments on nonaccrual and leverage reaching what many consider to be a self-imposed "limit" on the industry at about 0.7 times equity, I think this is off the table.

Instead, the only other option would be to deploy capital in higher-risk investments, namely second-lien and unsecured investments, or in collateralized loan obligations. Both can spin off yields that venture into the double digits, but carry greater risk of loss. Based on previous conference calls, management intends to continue to move the portfolio away from subordinated debt, and hold CLO investments to less than 10% of the company's asset base.

So what's the likely outcome? It's almost entirely predicated on the status of its nonaccrual assets. It's noteworthy that THL Credit hasn't marked down the investments substantially -- suggesting it could have sizable recoveries, or that the loans may turn around -- but, likewise, failing credits tend to fall further in subsequent quarters.

It's not looking good for the status of the dividend. Short of a reversal in nonaccruals, its lofty dividend may need resizing after the company reports earnings on Aug. 11.