There is a growing divide in BDC performance. Of the BDCs with the worst losses this year, many have outsize exposure to an esoteric asset class that investors simply don't want to own any more.

Alphabet soup
Investors are shunning "alphabet soup" investments such as collateralized loan obligations. CLOs are something like a bank, minus the branches, diversification, and deposit insurance.

Asset managers create CLOs by borrowing a bunch of money from banks, insurance companies, and other investors at low interest rates. That capital is then invested in bank loans to generate spread income from the difference between what a CLO pays on its liabilities and what it earns on its investment portfolio.

When loan losses are low, returns can be astronomical. When you take riskier loans and add bank-rivaling leverage of 10 to 14 times, the returns to the equity owner can often top 15% per year, even after handing a hefty cut to the manager.

When the music stops
Many investors have a stake in CLO equity and don't even know it. BDCs snapped up CLO equity during the booming years of 2013 and 2014. Double-digit yields on CLO equity stakes helped TICC Capital (NASDAQ: TICC), Apollo Investment (NASDAQ:AINV), and THL Credit (NASDAQ:TCRD) maintain fat dividends to investors, even as their primary business of making cash flow loans became more competitive.

Then high-flying CLO equity hit turbulence. One investor told Bloomberg that the difference between bid and ask prices grew to 20 points. To put that in perspective, imagine if Apple shareholders wanted to sell shares for $120 but new buyers only wanted to pay $96. Further, imagine this bid-ask spread went on for weeks, if not months. This is exactly what's going on with CLO equity. The market is drying up after an incredible post-crisis boom. 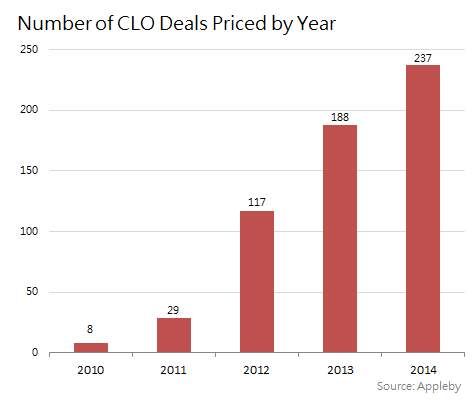 There are reasons for it. CLOs often have exposure to energy loans, which have come under pressure because of low oil prices. Loans to oil and gas companies make up 3% of the average CLO's assets, according to Reuters. If you assume the average loan will result in a 33% loss of principal, the average CLO would stand to lose 10% to 14% of its net asset value just from oil and gas loan losses. This assumes that the CLO manager bats 1.000 on every other loan in the CLO, a highly unlikely outcome.

Investors are clearly assuming the worst isn't over. Apollo Investment and TICC Capital trade at large discounts to net asset value of 21% and 14%, respectively.

THL Credit has disavowed CLO equity, slowly clearing it off its balance sheet. Notably, THL Credit carries its remaining $15.7 million of CLO equity at a $2.5 million discount to its mark at the beginning of 2015.

CLOs are even affecting M&A among BDCs. TPG Specialty Lending (NYSE:TSLX) has spent the past two months arguing why TICC shareholders should approve an acquisition for $7.50 per share. But when TICC reported a big decline in its book value from unrealized CLO equity losses in the third quarter, TPG Specialty Lending didn't bring up the $7.50 price tag in a press release.

Rather, TPG pointed to the fact that it would pay only 90% of book value, the implication being that TPG Specialty Lending probably sees TICC's book value as a very volatile moving target, in part because of its outsize CLO exposure. Dividend investors would be wise to take TPG's lead and look at CLO-heavy BDCs with an extra dose of skepticism.