Controversy over CEO pay is never far from the headlines, and Americans are now well aware that CEOs are paid several hundred times what the average front-line worker gets. However, that metric only illustrates the level of income disparity in our economy. It's not a useful tool for figuring how much CEOs should be paid -- a key question for investors.

As an example, let's take a look at two high-profile companies that have been in the news recently for CEO compensation: Coca-Cola (NYSE:KO) and Chipotle Mexican Grill (NYSE:CMG)

At Coca-Cola, investors harrumphed recently when the beverage giant released a proposal that could dilute shareholders by as much as 14.2%.

Among those who balked at the pay plan was David Winters, whose investment group Wintergreen Advisers owns more than 2.5 million shares in the soda maker. Winters called it "An unnecessarily large transfer of wealth from Coca-Cola's shareholders to members of the company's management team." It's easy to see why he's upset. Coke carries a market value of $180 billion, and a 14% dilution would throw $24 billion at executives at the expense of shareholders, though that's only if all performance goals are met.

Stock options, a major vehicle for inflated executive pay, were introduced as a way to incentivize CEO performance, but the tactic has been widely exploited over the years. In 1990, an influential Harvard Business Review article called for "big rewards for superior performance and big penalties for poor performance" and said executives were being treated like bureaucrats instead of entrepreneurs. What has ensued, however, is that successful CEOs are lavished with huge bonuses while mediocre ones are still paid handsomely. Notably, Warren Buffett refused to vote against Coke's pay package despite calling it excessive because he wanted to be loyal to Coke's management. His actions typify behavior among boards of directors, which are often unwilling to punish mediocre performance.

Trouble in burrito paradise
Meanwhile, stock market darling Chipotle had its executive pay package voted down by investors earlier this year. More than 75% of shareholders voted against the burrito chain's compensation plan last month in a non-binding measure, even with shares having returned more than 1,000% since the company's 2006 IPO. Chipotle's co-chief executives Steve Ells and Monty Moran earned almost $50 million combined last year. That's about 0.3% of the company's $17 billion market cap but 15% of its $327 million profit, and the combined package placed second only to Oracle's Larry Ellison, the highest-paid CEO in the country.

Chipotle's leaders certainly deserve to be rewarded, but despite its growth, the company is much smaller than heavyweights like Coke. Is $50 million -- or 15% of profits -- excessive?

A mathematical solution
In baseball, it has become fashionable to value a player based on the sabermetric statistic WAR, or wins above replacement, which indicates how many more wins a player would generate for a team compared to a readily available replacement. Baseball is a statistically rich field, which makes deriving an abstract value such as WAR possible, though there is no clearly established formula. In business, it's more difficult to measure a CEO's performance in comparison to the average replacement, but we can devise a rudimentary system.

CEO Muhtar Kent took the helm of Coca-Cola in July 2008. Since then, Coke shares have risen 62% -- slightly better than the returns of the S&P 500 at 56%. Compared to its rivals, Coke outperformed Pepsi, which appreciated 36%, but fell short of Dr. Pepper Snapple's growth of 175%. Based on share appreciation, Kent seems to have done a perfectly acceptable job.

However, there are qualitative factors in Kent's performance that bear examination as well. Kent inherited what was at the time ranked as the world's most valuable brand. Coke's competitive advantages are readily apparent in its distribution network, brand recognition, and secret formula, none of which Kent created. There have been relatively few innovations at Coke since Kent assumed leadership, perhaps the biggest being the introduction of Coke Zero. Coke has also acquired smaller beverage players like Odwalla and Honest Tea in recent years -- a key part of its growth strategy, as still beverages are growing faster than carbonated ones. While the company has continued to grow at a modest pace, soda sales in North America have declined for nearly a decade, and the company faces increasing concerns about the health effects of its products.

During his tenure, has Kent performed significantly better than a replacement CEO? Probably not. The stock performance has been average, and the company's core strengths are essentially the ones he inherited. Warren Buffett has famously said that "a ham sandwich could run Coca-Cola." If Muhtar Kent is doing a ham sandwich's job, then he and his management team probably don't need $24 billion in performance incentives..

With Chipotle, the shareholder outrage seems to be directed at the sums of money themselves, rather than the CEOs' performance. Ells is the founder of the company and opened the first Chipotle in 1993. Since then the company has grown to over 1,500 locations, sparking a fast-casual revolution. The burrito chain's financial metrics are often the best in the industry, and its share price has soared since its inception, up 56% in the past year alone. With international expansion picking up speed and its nascent ShopHouse concept rolling out, the company would seem to have a future just as bright as its past. Still, the rebuke its shareholders gave on the pay package is a reminder that there are limits for compensation, especially for a company the size of Chipotle, which is much smaller than the average blue chip.

How to calculate CEO pay
In 2013, the average S&P 500 (SNPINDEX:^GSPC) CEO earned $10.5 million, a new record. Total profits of S&P 500 companies were about $1 trillion, or $2 billion on average, meaning the average CEO's compensation was about 0.5% of the company's profit, or 0.03% of market cap, which is about $35 billion on average. Since executive pay seems like it should be tied to company profits and market value, perhaps we should use that as a starting point.

Then, using a variation of WAR, we can add or subtract from a CEO's value, awarding extra points for categories like stock performance, profit growth, innovations, and having founded the company. The formula would look like this: 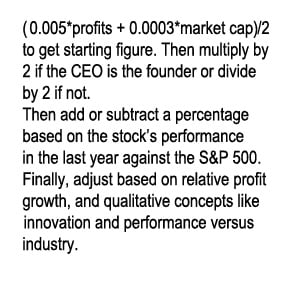 Coca-Cola last year made $8.5 billion in profits and has a market cap of $185 billion, giving Kent a starting point of $49 million in compensation based on our formula. However, let's divide that in half because Kent was not the founder and is doing a ham sandwich's job. Over the past year, Coke shares have underperformed the S&P 500 by 20%, so let's subtract 20% from his salary. Finally, profit growth has been negative recently and the company has not had any meaningful innovations, so let's subtract another 20%. Our final total is $15.7 million.

For Chipotle, profits were just $327 million last year, and its market cap is $18 billion, giving the CEOs a starting point of $3.5 million. We'll double it, as Ells is the founder, and then add 40%, as that's the amount by which Chipotle has outperformed the S&P 500. Profit growth is strong and looking stronger as the company delivered a whopping 13% increase in comparable sales in its first quarter report. Let's add 50% for the strong recent performance, which brings the total to $14.7 million. I won't get into the question of whether the two CEOs deserve a greater sum because of their split role.

Foolish takeaway
Based on the above formula, both the Coke and Chipotle CEOs are making more than the average CEO, but not exorbitantly more. That makes sense to me, as the two companies are industry leaders, though in a different way. Coke has dominated the beverage industry for generations, but it can only grow so much at this point. Chipotle, on the other hand, has created an industry with its innovative fast-casual concept, and it continues to grow at an impressive clip.

While we'll never be able to settle on a precise formula for CEO pay, it's important for investors to start thinking of it as a quantifiable concept. After all, nearly everything else in the stock market is.