Please ensure Javascript is enabled for purposes of website accessibility
Log In Help Join The Motley Fool
Free Article Join Over 1 Million Premium Members And Get More In-Depth Stock Guidance and Research
By Patrick Morris - Jul 19, 2014 at 9:18AM

People buy socks all the time. Warren Buffett thinks a simple lesson we can learn from them will teach us how we should buy stocks.

I hate buying socks. But according to Warren Buffett, the process can actually teach us how to be a successful investor.

The wisdom
Following the 2008 stock market collapse, Buffett penned the quote above in his letter to Berkshire Hathaway shareholders. This was by far the most tumultuous time Buffett has seen atop Berkshire, as the S&P 500 tumbled by nearly 40% on the year.

Buffett began his letter honestly and painted the dim picture of what the American economy was facing in February 2009, as the S&P 500 had officially been cut in half in just 14 months. Panic was on the mind of every investor at the time. Buffett revealed:

By the fourth quarter, the credit crisis, coupled with tumbling home and stock prices, had produced a paralyzing fear that engulfed the country. A freefall in business activity ensued, accelerating at a pace that I have never before witnessed. The U.S. -- and much of the world -- became trapped in a vicious negative-feedback cycle. Fear led to business contraction, and that in turn led to even greater fear.

But the collapse of the market didn't deter Buffett as an investor. After he spoke about the troubles that characterized the country in 2008, the Berkshire chief said he believed, "America's best days lie ahead."

Buffett put his money where his mouth is. He poured more than $15 billion into the market in September and October 2008 by making massive investments in well-known titans. This encompassed $5 billion in Goldman Sachs (NYSE: GS), $3 billion in General Electric (NYSE: GE), and $6.5 billion into the Wrigley subsidiary of Mars.

Yet perhaps the greatest example of Buffett's wisdom -- which he learned from mentor Ben Graham -- is presented most clearly in his investment in Wells Fargo (WFC 1.52%).

The well of Wells
Buffett first began buying Wells Fargo in 1989. But as the new century approached Berkshire began to slowly unload its position, which dropped from $392 million at the end of 1998 to $306 million by 2001. 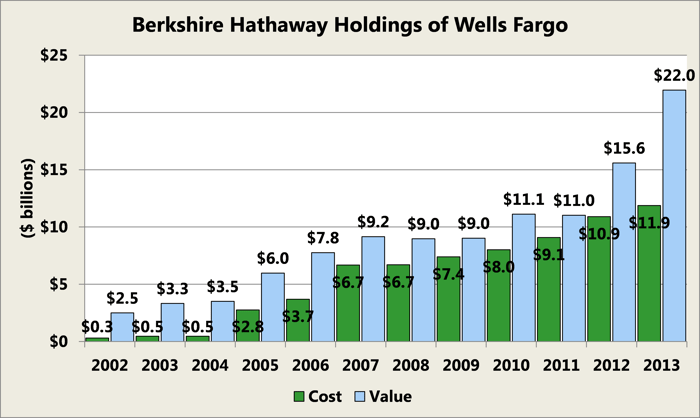 So why has Buffett aggressively added to his position of Wells Fargo during one of the most trying and difficult periods for the financial industry? Put simply, it -- like the socks Buffett buys -- was "marked down."

The bank worth buying
One key metric used by investors to gauge a bank's relative value is the price-to-tangible book value. Wells Fargo watched its fall as the decade progressed: 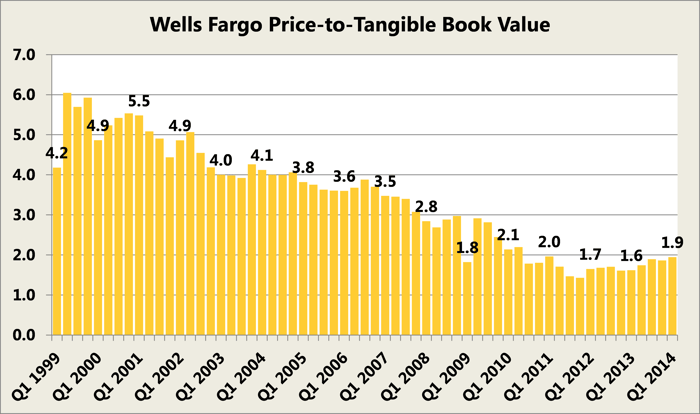 On a relative basis, Wells Fargo was put on sale nearly 10 years ago, and its price has only improved as the years have progressed. But we must see this relative discount -- some banks are significantly less expensive than Wells Fargo -- as only part of the equation.

Consider Buffett's quote in 2005, when the first major purchase was made:

We substantially increased our holdings in Wells Fargo, a company that Dick Kovacevich runs brilliantly.

Even though the bank's multiple was trading well below where it had for the previous five years -- as shown in the chart to the right -- Buffett never mentioned the relative value. Instead, he highlighted the business and the underlying leadership.

But why has Buffett continued to buy Wells Fargo?

Sure, Wells Fargo's trading multiple has fallen in the nine years since Buffett began aggressively adding to his position. And although its profitability -- as measured by its return on assets, or ROA, and return on equity, or ROE -- has fallen as a result of the financial crisis, the gap isn't nearly as dramatic as the drop seen in its relative valuation.

The drop in its value doesn't line up with the dip in its business operations. And while the bank's multiple is still often far above its peers, remember Buffett once said:

We try to buy into businesses with favorable long-term economics. Our goal is to find an outstanding business at a sensible price, not a mediocre business at a bargain price.

With that in mind, consider Bank of America (BAC 1.09%), which Buffett stake a position in after the market overreacted and its stock cratered in the fall of 2011.

Why did he aggressively continue to buy Wells Fargo, but only make the one-time investment in Bank of America? The numbers don't lie:

Bank of America saw its price-to-tangible book value plummet to just 0.5 in August 2011 when Buffett made his investment. So that chart doesn't tell the whole story.

But it does reveal why Buffett has continuously added to his stake in Wells Fargo, versus a one-time investment in Bank of America.

Put simply, there is perhaps no clearer picture of "a wonderful business at a fair price" than Wells Fargo over the last nine years.

The story of socks
So what does any of that have to do with socks? Let's revisit Buffett's quote:

Long ago, Ben Graham taught me that "Price is what you pay; value is what you get." Whether we're talking about socks or stocks, I like buying quality merchandise when it is marked down.

Let's say you see a pair of socks at the dollar store versus some at the neighborhood sports store. The sports store has a $25 three pack on sale for $15, while you could buy three pairs for $3 at the business next door.

Knowing one "investment" is five times more expensive, Buffett would tell you to pay $3 for the socks, right?

You'd have to consider so much about the socks beyond just the price. For example, what if the cheaper socks carried significant risk of injuries like blisters? Or what if they wore out after just a few months of use? And so on.

The $15 socks could in fact provide better value. If the $3 socks must be replaced every eight months -- their "quality" may be anything but  -- and you could hold onto the $15 socks for five years, you'd end up paying more over the long term for being cheap:

You may say over the short term cheaper socks provide more value, but when you take the long-term perspective with purchases -- years or perhaps decades -- the relative quality is incredibly important to consider.

In the same way, stocks shouldn't be held for days, weeks, or months, but years or decades. When Buffett announced in 2003 that he had added to his position in Wells Fargo, he also noted:

We bought some Wells Fargo shares last year. Otherwise, among our six largest holdings, we last changed our position in Coca-Cola in 1994, American Express in 1998, Gillette in 1989, Washington Post in 1973, and Moody's in 2000. Brokers don't love us.

Knowing he still holds massive positions in Coca-Cola and American Express, which cost him a little over $2.5 billion but at the end of 2013 were worth more than $30 billion, there is perhaps no clearer picture of the simple beauty of "buy-and-hold" investing.

The final thing to remember
In 2012, Buffett said:

More than 50 years ago, Charlie [Munger] told me that it was far better to buy a wonderful business at a fair price than to buy a fair business at a wonderful price. Despite the compelling logic of his position, I have sometimes reverted to my old habit of bargain-hunting, with results ranging from tolerable to terrible.

Investing shouldn't be a gauge of just the price as we look for bargains. Nor should it be a consideration of just the business, as Buffett has also argued that "a business with terrific economics can be a bad investment if the price paid is excessive."

And when we do this, we'll inch closer to realizing the same success Warren Buffett has had.