Wal-Mart (NYSE:WMT) gets a lot of heat for paying low wages to its workers. But make no mistake, the company is not strapped for cash. In fact, the mega-retailer paid Warren Buffett $13 billion last year.

Well, the company doesn't pay him directly, but rather it pays the McLane Company, a subsidiary of Buffett's Berkshire Hathaway. That $13 billion accounts for nearly 30% of McLane's revenue.

What is it?
McLane Company is a wholesale distributor of groceries and other items to stores across America.

It was acquired by Berkshire Hathaway and Warren Buffett more than 10 years ago, and it was bought for $1.5 billion from none other than...Wal-Mart.

McLane was formerly owned by Wal-Mart but in an effort to "focus completely on its core retail business," it officially sold the distributor to Berkshire Hathaway in May 2003 after Buffett and Wal-Mart's CFO, Tom Schoewe, talked for two hours.

Why he did it
When discussing the purchase in his letter to Berkshire Hathaway shareholders, despite the fact McLane "operates on paper-thin margins – about 1% pre-tax," Buffett noted:

It's a good business, but one not in the mainstream of Wal-Mart's future. It's made to order, however, for us.

At the time, it had about $23 billion in sales, and more than $7 billion came from Wal-Mart and its stores. But when the news was announced Buffett said, "we believe there is an excellent possibility for expansion of the customer base in the future."

And expand it has.

Massive growth
As shown below, over the last 10 years, McLane has seen massive gains in its revenue: 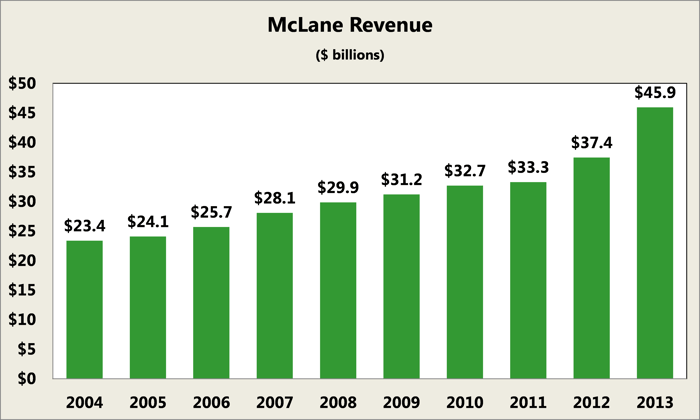 Part of the reason for the jump in both 2012 and last year resulted from the acquisition of Meadowbrook Meat Company, which distributes roughly $6 billion worth of food to national restaurant chains.

As a result, it isn't just Wal-Mart that McLane gets sales from, but also gas station and convenience store giant 7-Eleven as well as Yum! Brands which owns Taco Bell, KFC, Pizza Hut, and others.

With that in mind, it's no surprise the latest Berkshire Hathaway annual report notes if Wal-Mart or one of the other major customers slowed its purchases, there could be "a material adverse impact on McLane's periodic revenues and earnings."

What it means to Berkshire Hathaway
When the sale was first made, Buffett himself admitted because of its "paper-thin margins," the sales of McLane "will swell Berkshire's sales figures far more than our income."

It had 26% of the operating business revenue at Berkshire Hathaway, McLane had a pre-tax income of only $486 million last year, which represented just 2% of the total $23.2 billion at Berkshire.

Yet in true Berkshire Hathaway and Buffett fashion, it should come as no surprise to learn during its first four years its paper-thin margin stood at 0.90%, and over the last four has expanded to 1.09%.

And while just 0.19% of difference doesn't sound like a lot, it meant nearly $300 million more to its bottom line.

Midas touch
Thanks to its massive size, Berkshire Hathaway looks like a giant maze with an endless amount of turns leading to new businesses to be explored. But no matter where you look, around every corner, there's always a pot of gold.