Although just 26 states chose to adopt the provision of the Affordable Care Act that expands Medicaid, the program has been a goldmine for private Medicaid insurers like UnitedHealth Group (NYSE:UNH) this year.

During the second quarter, UnitedHealth added 380,000 new Medicaid members, bringing the total new members added this year to 635,000. That surge in membership is driving significant revenue growth, and given that UnitedHealth is the biggest private Medicaid insurer, its results bode well for results at Aetna (NYSE:AET) and WellPoint (NYSE:ANTM) too. 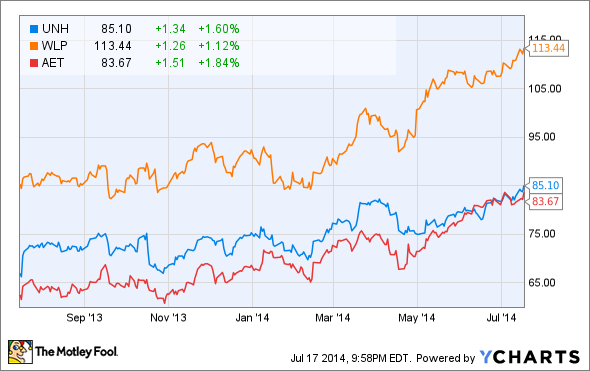 Medicaid membership sparks revenue
Nationwide, over 6 million people have signed up for Medicaid coverage since last summer, including more than 700,000 people who signed up in states that didn't expand eligibility under the ACA.

Aggressive outreach from many states that did expand Medicaid, including California and Michigan, and automatic applications submitted for those potentially qualifying that applied for private insurance through health care.gov were major contributors to increasing Medicaid enrollment last quarter.

Additionally, increased awareness of Medicaid drove hundreds of thousands to seek coverage in states that opted out of Medicaid expansion.

The increase in membership supports the argument that Aetna and WellPoint will put up similarly strong Medicaid numbers when they report on July 29th and July 30th, respectively.

Aetna and WellPoint's momentum is likely to have carried over into the second quarter given that UnitedHealth's 380,000 new Medicaid members helped drive up sales in UnitedHealth's Community and State segment by 29% year-over-year to $5.8 billion. That brought the segment's revenue tally to nearly $11 billion over the first six months, up from less than $9 billion in 2013.

Importantly, while analysts exited the first quarter worrying over soaring hepatitis C costs tied to the launch of Gilead's Sovaldi, those costs were an afterthought on UnitedHealth's second quarter conference call.

Fear over high cost older enrollees signing up for coverage seems to have been overblown too, given that the medical care ratio increased by just 10 basis points from a year ago across all its plans during the second quarter, leading to an operating margin of 6.1%; which, while lower than the 6.4% notched last year, was still healthy.

Fool-worthy final thoughts
UnitedHealth continues to kick off substantial cash flow that is fueling dividends and share buybacks. The company increased its dividend payout by 34% to $1.50 per share during the quarter and has already bought back $2 billion worth of its stock this year.

UnitedHealth also took advantage of the strong results to increase the low end of its full year earnings guidance. The company now expects to deliver EPS of between $5.50 and $5.60 per share, up from its prior $5.40 to $5.60 forecast. While that may not seem like a lot, UnitedHealth has been one of the more conservative insurers in terms of guidance this year, and its willingness to increase its guidance could set the stage for increased guidance industry wide this earnings season.