Times have been tough for Yum! Brands (NYSE:YUM) recently. While competitors like Chipotle Mexican Grill (NYSE:CMG) and Panera Bread (NASDAQ:PNRA) are doing well in the restaurant business, Yum! has been left underperforming. After reporting revenue and earnings results that missed analyst expectations, shares of the parent of Pizza Hut, Taco Bell, and KFC fell 7% on July 17. Despite seeing the market rally more than 1% on July 18, Yum!'s shares stayed depressed, inching up just 0.5% for the day. Is this a sign of tougher times to come for the company or is now an opportune time for the Foolish investor to jump into the fray?

Yum! doesn't look so delectable now
For the quarter, Yum! reported revenue of $3.2 billion. Although this represents a 10% gain over the $2.9 billion management reported the same quarter a year earlier, the company's top line fell short of the $3.25 billion analysts anticipated. According to the company's earnings release, this rise in sales was driven for the most part by a significant improvement in its China segment. This segment saw revenue soar 18% from $1.45 billion to $1.7 billion as a 15% jump in comparable-store sales was accompanied by rising store count.

From a profit standpoint, Yum!'s results were even better, but still managed to fall short. For the quarter, the company reported earnings per share of $0.73. Even though this represents a 20% gain over the $0.61 management reported during the second quarter of 2013, its bottom line growth missed forecasts by a penny. This growth was due in part to rising sales, but can also be chalked up to a decline in Yum!'s company restaurant expenses, which fell from 74.5% of sales to 72.7%.

Is now the time to dig in?
With shares of the restaurant giant trading 7% off their 52-week high, some investors might feel enticed to buy the company's stock. It's possible that better opportunities abound, however. Take, for instance, Chipotle and Panera.

Over the past five years, Chipotle and Panera have been true engines for growth. Between 2009 and 2013, Panera's revenue shot up 76% from nearly $1.4 billion to $2.4 billion. According to the restaurant chain's most recent annual report, its rise in revenue was partially attributable to a 29% increase in aggregate comparable store sales over this period. It has also been driven by a 29% rise in store count from 1,380 in 2009 to 1,777 by the end of its 2013 fiscal year. 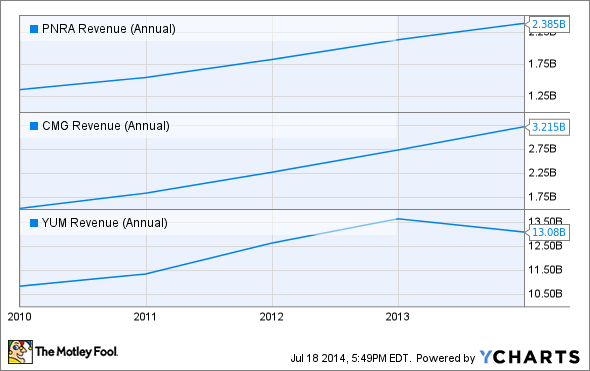 Chipotle's metrics have come in even better than Panera's. During the company's most recent five-year timeframe, revenue skyrocketed 112% from $1.5 billion to $3.2 billion. Just as in the case of Panera, Chipotle benefited from higher comparable-store sales, which shot up an aggregate 41%. The real source of growth for the company appears to be its higher store count, however, which rose 67% from 956 locations in 2009 to 1,595 by the end of 2013. 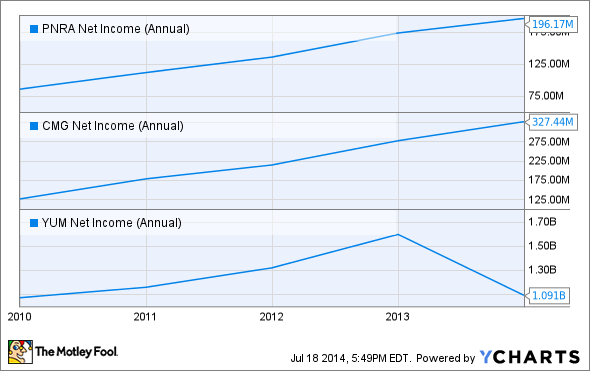 Looking at profits, Chipotle continued to outperform its rival. Between 2009 and 2013, the gourmet burrito behemoth reported a 158% increase in net income from $126.8 million to $327.4 million. Most of this improvement apparently came from the company's revenue growth, but investors must also give credit to the business's cost of goods sold, which dropped from 75.1% of sales to 73.4%.

Unfortunately, rival Yum! couldn't come close to touching either of these restaurant chains. Over the past five years, sales at the conglomerate grew a more modest 21% from $10.8 billion to $13.1 billion as declining popularity in the U.S. and fears concerning the avian flu in China started to negatively impact the company's growth during 2013. This slowing of sales, accompanied by a costly impairment of its Little Sheep operations in China and rising interest expenses, has resulted in Yum!'s net income inching up just 2% from $1.07 billion in 2009 to $1.09 billion by the end of 2013.

History doesn't repeat itself; it rhymes
While concerns over the avian flu have taken a toll on Yum!'s top and bottom lines, another significant event just popped up that risks causing the same kind of public backlash against the business.  On July 20, news broke that Shanghai Husi Food Co. had been closed by Chinese authorities.  Allegedly, the company, who supplies not just Yum! but also some of its peers, has been selling expired meat, as well as meat that has been dropped on the floor.

According to reports, the company has been mixing in expired and otherwise contaminated meat with good meat and has been active in misleading its customers' quality inspector. The fallout from this is currently unpredictable, but upon hearing this news, Yum! announced that its KFC and Pizza Hut locations had immediately halted the sale of products using Shanghai Husi Food Co.'s goods.

Foolish takeaway
Based on its most recent quarterly results, it looks as though Yum! is growing again, but not quite as fast as Mr. Market had hoped it would. In the long run, it's possible that management could push sales growth higher as its China operations improve, but falling sales in its Pizza Hut and Taco Bell segments will likely continue as long as competitors like Chipotle and Panera are growing. For this reason alone, the Foolish investor wouldn't necessarily be foolish for buying into Yum!, but it's possible that Chipotle and Panera could make for better long-term prospects.