Banana producers have been suffering price disruptions since the beginning of the year. What’s the outlook for Chiquita Brands International and Fresh Del Monte Produce?

The banana market has been facing some difficulties. Since the beginning of the year, several issues have been affecting banana production and procurement. To start with, January and February were tough operating months as the severe growing conditions in Panama and Costa Rica, with rainfall more than 70% below normal, significantly affected production. In addition, the rise in procurement and labor costs did not help margins for producers like Chiquita Brands International (NYSE: CQB) and Fresh Del Monte Produce (FDP 0.00%).

If you take a look at the Central America and Ecuador banana spot price, you'll see how it increased from January until April, when the weather factor diminished. 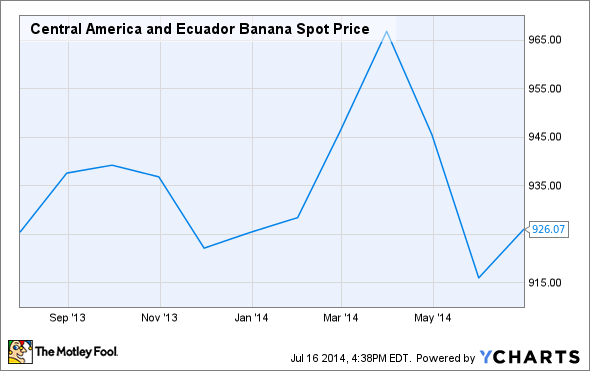 Now that prices are similar to those in the beginning of the year, what are the outlooks for these two companies?

Tough beginning of the year
As expected, Chiquita did not meet its financial performance expectations this past first quarter, with a GAAP net loss of $25 million after reporting net income of $2 million in 2013. The adverse weather was a crucial factor that affected performance. Basically, the drought conditions in Central America and winter storms in North America disrupted Chiquita's value chain and market demand for its products.

As for its banana business specifically, although Chiquita managed to grow banana volume about 5% in North America year over year in its first quarter, it was forced to supply customer commitments through unplanned stock purchases in Ecuador at a much higher spot price. As a result, the company estimates that the combined economic impact totaled approximately $9 million in comparison with 2013, including a 6% year-on-year reduction in owned farm productivity.
Considering that bananas represented almost 65% of its total net sales in 2013, the damage was significant.

However, Chiquita's salads business, which makes up 31% of its net sales, is doing better and better. Volume grew 5%, making this quarter the fourth consecutive quarter of year-over-year retail volume growth. What's the trick?: new private-label and Fresh Express-branded contract wins as well as higher year-over-year velocities with existing customers. Chiquita also managed to recover about 70% of the total cost inflation through its own efficiency actions. This month, the company introduced a resizing of its prepackaged salads with the intention of better matching the size of competitors' products and consumers' usage.

But the real deal will come by the end of this year, when a transformational merger with Fyffes will hopefully take place. The merger will drive substantial operating efficiencies to the company's core value chain and provide better risk mitigation. Why? Chiquita will benefit from broadened growing areas, multiple shipping options, and an expanded team of experts to manage the disruptions. Consequently, the new company would have the most diverse supply and shipping environment in the industry.

In better shape
The case for Fresh Del Monte Produce is slightly different. First-quarter net sales were up 7% to $982 million with operating income growing 18% to $63 million. The jewel this quarter was the melon category, which saw prices increase 23% thanks to tight industry supply.

Bananas, which contribute 44% of total net sales, enjoyed higher volumes in the Middle East and North America. The segment as a whole increased its net sales $31 million year over year to $437 million. That's not bad given the circumstances. However, procurement costs are rising and this pushed worldwide banana unit costs up 3%, which represented 29% of Fresh Del Monte's total cost of sales for the first quarter.

Looking forward, the company remains well positioned in its marketplace as it is vertically integrated and continues to grow in its prepared food segment. Net sales for this segment increased 15% for this past first quarter, adding $2 million more gross profit year over year.

Final thoughts
For now, the impact of weather on the banana market is behind us and now we are returning to a more normal market, which should help Fresh Del Monte and Chiquita especially.

Chiquita holds substantial presences in Panama and Costa Rica, where there is less rainfall today and over the last five years than there has been traditionally. The company is adding irrigation infrastructure to some of its farms, but if the situation is aggravated we might see a similar segment performance or worse.

A great deal of the solution will come through Chiquita's merger with Fyffes. The diversification, size, and reach of the new company will help it avoid the disruptions we've seen in the fruit markets. However, the agreement is still pending regulatory and shareholder approval.

Fresh Del Monte managed to withstand the disruption better and profited from the higher pricing in the beginning of the year as the disruption did not significantly affect its yield. This company should continue to drive good results.

Louie Grint has no position in any stocks mentioned. The Motley Fool recommends and owns shares of Apple. Try any of our Foolish newsletter services free for 30 days. We Fools may not all hold the same opinions, but we all believe that considering a diverse range of insights makes us better investors. The Motley Fool has a disclosure policy.