Federal Reserve Chairwoman Janet Yellen thinks your small-cap biotech is overvalued. The Fed's Monetary Policy Report, released on July 15, had this to say:

[V]aluation metrics in some sectors do appear substantially stretched -- particularly those for smaller firms in the social media and biotechnology industries, despite a notable downturn in equity prices for such firms early in the year.

It's not clear from the statement exactly what valuation metrics the Fed is using. It certainly isn't P/E, since most small-cap biotech companies aren't profitable. Only about 20% of the 110 drug companies in the CAPS database with market caps between $250 million and $1 billion were profitable last year. And at least some of those -- Albany Molecular Research and PetMed Express, for instance -- I wouldn't call biotech companies.

Later in the report, the Fed seemed to throw the entire sector into the overvalued category.

Equity valuations of smaller firms as well as social media and biotechnology firms appear to be stretched, with ratios of prices to forward earnings remaining high relative to historical norms.

Let's ignore for a second that forward P/E is a dangerous measurement since it relies on analyst expectations. Here's a chart of the forward P/Es of the four big biotechs: Amgen (NASDAQ:AMGN), Biogen Idec (NASDAQ:BIIB), Gilead Sciences (NASDAQ:GILD), and Celgene (NASDAQ:CELG). 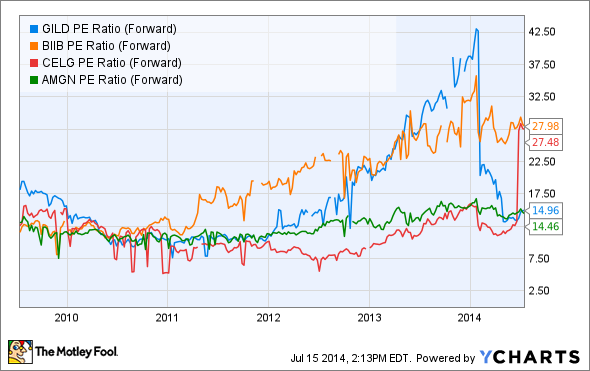 Call it a mixed bag, with Celgene and Biogen Idec now above their historical P/Es and Gilead Sciences and Amgen not looking particularly overvalued at the moment. But since these are dependent on analyst expectations, they can change rapidly, as the recent drop in Gilead's forward P/E shows.

What I think Yellen and her comrades are really worried about is the substantial increase in values, especially in the small-cap space, over the last few years. We've pulled back from the highs set earlier this year, but values are still up substantially compared to the S&P 500. 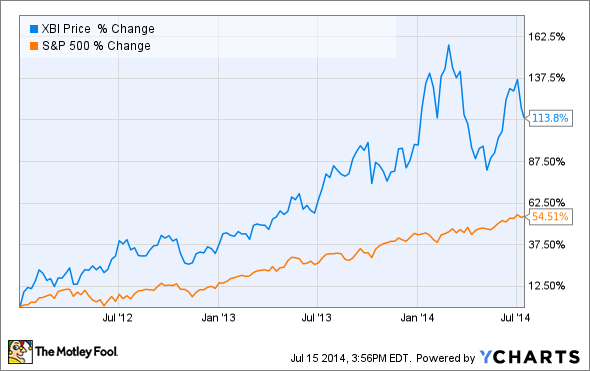 In biotech, valuation is determined by risk tolerance. I think the increase over the last two and half years has more to do with valuations being out of whack at the beginning of 2012 as investors weren't willing to take on risk, rather than with investors taking on too much risk now.

Biotech isn't a steal, either
There are many different ways to value development-stage biotechs. I prefer to make an educated guess at the potential values after the next binary event, and then determine whether the probability of success for the binary event makes it worth the risk. See this video for more details.

Every drug is going to have a different likelihood of success based on the clinical data available, and there's a lot of educated guessing with the potential valuations, making it hard to do a systematic approach to determine whether biotechs are overvalued (i.e., investors aren't being rewarded for the risk they are taking). But my feeling after covering this industry for nearly a decade is that Yellen is right to some degree that valuations are a little higher than they should be -- albeit not for every company.

One way to not take on risk that outpaces the potential reward is to look a little longer term. When biotech becomes overheated, investors want their money working right now, so companies with the most immediate binary events get bid up in the frenzy. If you're willing to buy and hold -- at least for the medium term -- there are still some deals out there. And being patient allows you time to buy on dips.

You know, like when the Fed chief says the sector is overvalued.