While most people are chasing investment opportunities in the online advertising space, it pays to be a contrarian and search for investment candidates in the traditional media market.

However, it isn't doom and gloom for all traditional media companies. Central European Media Enterprises ( CETV ) and Lamar Advertising ( LAMR 2.27% ) are notable exceptions that have thrived in a new media landscape dominated by online channels.

Geography makes a difference
While research from Kantar Media shows that U.S. media spending for network television and spot television has remained flat over the past five years, this isn't the case in Central and Eastern Europe (CEE). According to December 2013 research by Group M, television's market share of advertising expenditure in the CEE region increased from 47% in 2006 to 52% in 2013. In fact, Internet advertising only accounted for 15% of 2013 advertising spend in CEE.

Moreover, Central European Media Enterprises expanded its quarterly revenues by 15.4% year over year in the first quarter of 2014. Its growth rate is particularly impressive, compared with the 2008-2013 CAGR of 7.2% for U.S. Internet display advertising expenditure.

Dominating the media channel (TV) with the broadest reach in CEE, Central European Media Enterprises is well-positioned to capitalize on the convergence of CEE's advertising spend with that of the developed markets. 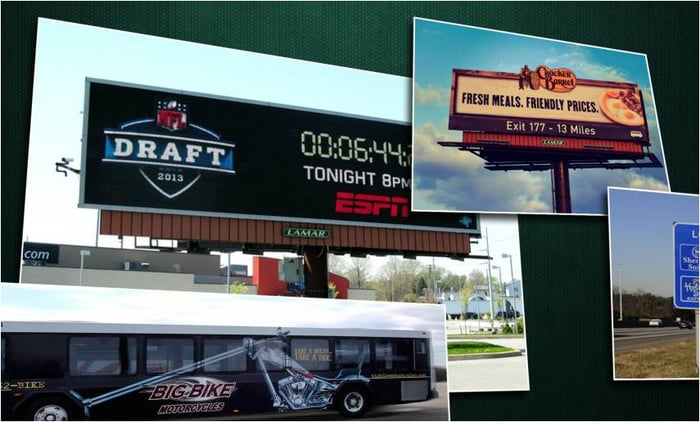 Outdoor physical display advertising trumps online counterpart
Traditional outdoor media formats like billboards have existed for a long time, with the earliest record of billboard rental going all the way back to 1867. Outdoor advertising doesn't just have a long history, it's also one of the most cost-effective ways to reach a large audience.

Statistics from the Outdoor Advertising Association of America indicate the relative average cost to reach a thousand adults between ages 25 and 54 (CPM) via outdoor advertising is the cheapest among competing media channels at $3.43. In contrast, the CPMs for display advertising on Internet search sites and portal sites are $5.00 and $9.00, respectively.

Lamar Advertising, the second largest outdoor advertising company in the U.S. (in terms of number of displays), has remained in favor with its corporate customers because of the cost-effectiveness of outdoor media. It boasts a national footprint of approximately 145,000 billboards and is the largest provider of logo signs in the U.S., operating close to 89% of privatized state logo contracts.

Lamar Advertising's market leadership in billboards and outdoor advertising is protected by the fact that permits allowing out-of-home advertising are limited and mostly in the hands of incumbents like itself.

Lamar Advertising's financial track record is the best validation of the continued relevance of outdoor advertising. Since 1995 -- 19 years -- Lamar Advertising has maintained EBITDA margins in excess of 40%. During the same period, it has delivered negative revenue growth in only three of these years.

Why Allbirds Stock Fell 10% at the Open Today