Nu Skin Enterprises (NYSE:NUS) shares dropped on Friday following downgrades from Bank of America. Shares have fallen more than 50% this year in the wake of regulatory problems in China that also threaten competitor Herbalife (NYSE:HLF). Have multilevel marketing companies become too risky?

Bank of America Merrill Lynch released a report that downgraded Nu Skin from neutral to underperform, lowered the full-year earnings-per-share estimate from $6.22-$6.93 to $5.25-$5.75, and cut the price target to $63 per share.

What were the bank's motivations for the cuts -- and why do they spell trouble for Nu Skin's future?

Trouble in China
Bank of America cited Nu Skin's problems in China as a primary factor in the downgrades.

Nu Skin ran afoul of government regulators earlier this year citing concerns about the company's multilevel marketing structure. The investigation was settled with Nu Skin paying a $540,000 fine for unsubstantiated claims and the sale of unregistered products. Nu Skin halted new representative training in the country during the investigation, and year-over-year revenue growth in China dropped from 243% in the fourth quarter to 63% in the first quarter.

The investigation settlement suggested that Nu Skin's performance could start to improve in future quarters, but that's far from guaranteed.

Why does China matter so much?

Importance of expansion
MLM companies haven't seen significant growth in the U.S. market in decades. According to a recent research paper by FTC senior economist Peter Vander Nast and The College of New Jersey dean William Keep, the direct selling industry had an annual growth rate of about 1.4% between 1972-2012. The U.S. GDP growth rate during the same period was 2.8%. Recruitment of more sales representatives over the years didn't boost direct sales. In fact, the opposite happened. 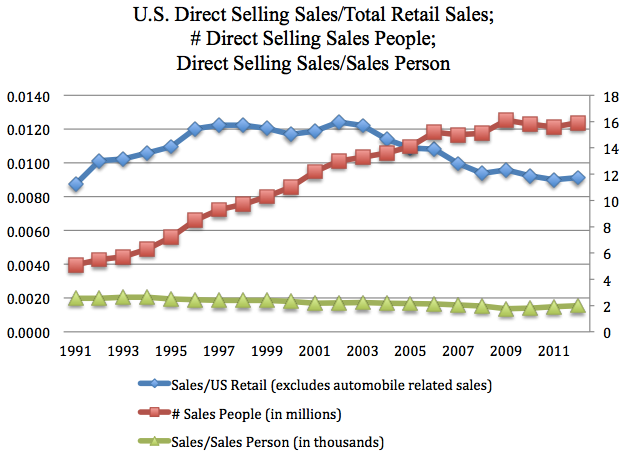 Source: Multilevel Marketing and Pyramid Schemes in the United States: An Historical Analysis

New markets such as China prove vital to MLM success because the regions aren't oversaturated with sales people and products. China accounted for 41% of Nu Skin's first-quarter revenue -- and that was with the regulatory problems causing a slowdown.

Revenue loss in China could gut Nu Skin's top line, and that loss could come either from dwindling popularity or rapid growth that creates oversaturation like in the U.S. market. Another potential threat is further fines in either country and a pyramid scheme investigation involving Herbalife.

Do Herbalife or Nu Skin qualify as pyramid schemes? The legal answer isn't cut and dried but essentially boils down to whether a company's primary function comes from forcing recruited sales reps to purchase products in order to receive performance rewards. That's harder to prove legally than it sounds.

MLM companies have a long history of FTC investigations that go back to the notable case against Amway that occurred in the latter 1970s. The FTC ended up finding Amway's sales safeguards sufficient but warned Amway against any false advertising -- a similar ruling to China's recent Nu Skin investigation.

Herbalife and Nu Skin could both face further fines in the United States and abroad for false advertising, but it's unlikely that the FTC will label Herbalife as a pyramid scheme.

Foolish final thoughts
The Bank of America downgrades raise more concerns about Nu Skin's business, but the majority of analysts still have the company at a buy rating. Nu Skin remains in a perilous position with an dependence on China sales and the past history of oversaturating markets.

The FTC investigation into Herbalife likely won't have much of a long-term impact on MLM businesses, though the gray areas in the legal definition mean that an eventual pyramid scheme ruling isn't impossible.