Please ensure Javascript is enabled for purposes of website accessibility
Log In Help Join The Motley Fool
Free Article Join Over 1 Million Premium Members And Get More In-Depth Stock Guidance and Research
By Patrick Morris - Jul 22, 2014 at 7:00AM

The impressive jump
Since the financial crisis Bank of America has had a tough five years. Its stock price and profits plummeted. Its reputation suffered. Many of its customers loathed it.

Wells Fargo on the other hand, had its fair share of difficulties, but all things considered, it has been on a remarkably easier ride since 2008.

It turns out, however, that is all changing.

Each year, Satmetrix reveals its Net Promoter Score (NPS), which surveys more than 23,000 individuals to learn more about their opinions on a variety of goods and services spanning 22 industries and 219 brands.

While the questions span a variety of topics to gain further insight, the way it calculates the ultimate Net Promoter Score is quite simple. It takes the percentage of customers who are known as "promoters" -- ranking the brand 9 or 10 on the 10 point scale -- and subtracts out those who are "detractors," ranking it six or below.

As you might suspect, Bank of America had a devastating blow to its NPS score in the midst of the financial crisis. But since then? My words only fall short: 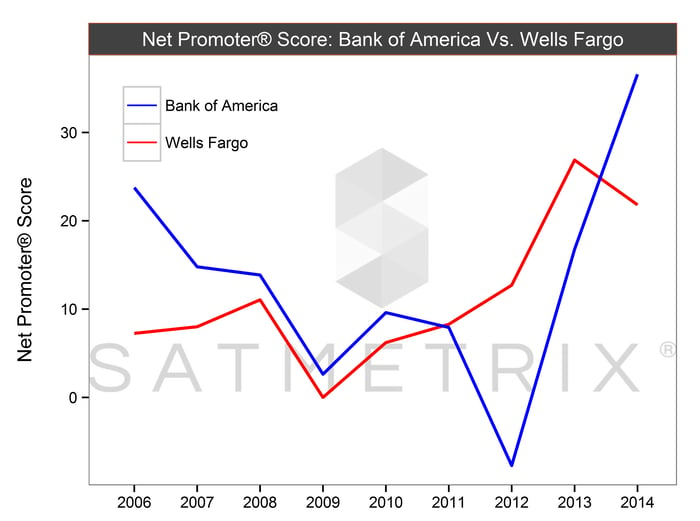 As you can see, Bank of America has been on an astounding run over the last two years, as its total score has risen by 39 points since 2012. It has moved from the absolute bottom of the 14 banks measured in 2012 to being tied for sixth in 2014. And it's only three points away from fourth-place BB&T.

In a recent conversation with Brendan Rocks, a Data Scientist at Satmetrix, I asked him about the remarkable success of Bank of America since 2012. He honestly admitted, "it's completely stumped me... I think it's absolutely remarkable."

He went on to reveal relative to Wells Fargo -- as shown below -- Bank of America has seen impressive gains across a variety of vital metrics. Not only has its broader reputation improved, but so too has its ease of use, as well as the experience of opening a new account: 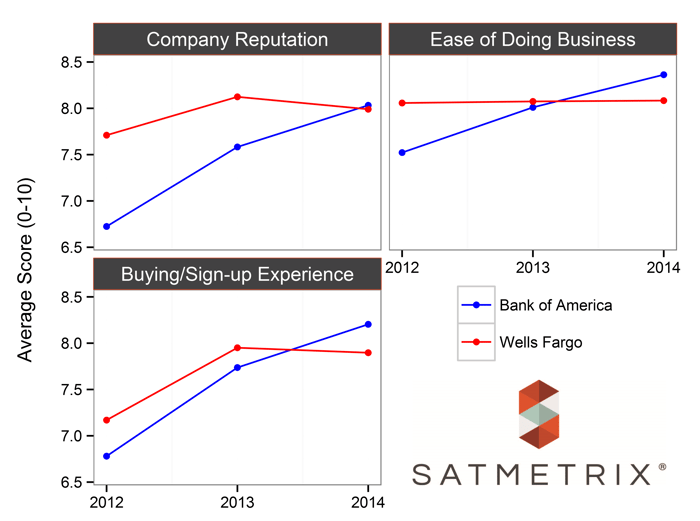 Why this matters to investors
As investors, it's easy to think some of the only critical things to watch, especially at banks, are the underlying financial metrics. While those are vital to monitor -- and please never think otherwise -- gauging outside measurements of customer loyalty, satisfaction, and countless others are also important to understand the true underlying business dynamics that will drive success in the years to come.

Brendan noted one of the reasons the NPS score is "a very good fit for the banking industry," is because banking "is kind of a commodity, as a lot of these services are very similar, and one of the key ways banks and insurance firms can differentiate themselves is on their customer experience."

Much has been made of the changes Bank of America has undergone since its bottom fell out in the midst of the financial crisis, but this serves as one more reason to understand that its turnaround hasn't simply begun, but it is succeeding.