Joseph Hogue
(jhogue99)
Author Bio
I am a freelance equity analyst and investment writer with ten years in the industry. I have worked as a sell-side analyst and have written hundreds of articles, reports and valuations.

According to the Association of American Railroads, the number of railcars shipping petroleum products has surged to more than 15,000 carloads a week as of this month, more than double the 7,000-carload average through 2010. Crude shipments by rail set a record of 110,000 carloads in the first quarter of the year. 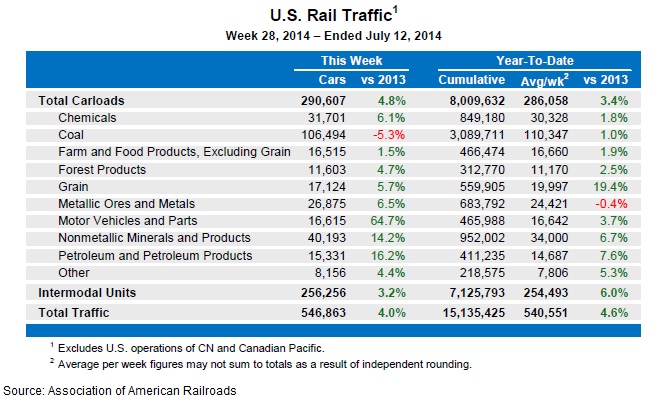 The upside to rail transportation of petroleum products is that it is normally on shorter contracts and there is a greater flexibility in shipment routes. There are approximately 140,000 miles of rail track in the United States, compared to just 57,000 miles of crude oil pipelines.

On the downside, it costs more to ship crude oil and energy products by rail. The Congressional Research Service estimates that transporting crude by rail costs between $10 and $15 per barrel, up to three times as expensive as pipeline transportation.

Transportation by rail out of the Bakken formation in North Dakota has surged as wide crude oil differentials entice producers to ship crude to the coasts. Bakken production has risen nearly 280% to 1.01 million barrels a day in the five years to January. Since late last year, Bakken crude has sold at a $5 to $15 discount to West Texas Intermediate crude. Rail capacity from the area has increased rapidly and 62% of Bakken crude is transported by train.

Rail rising, but at what cost?
Besides being more expensive, transportation by rail may be more dangerous, and use of older cars is leading to more spills. More crude oil was spilled in U.S. rail accidents in 2013 -- nearly 1.5 million gallons, according to the Department of Transportation's Pipeline and Hazardous Materials Safety Administration --  than was spilled over the entire previous three decades. This doesn't include the 1.5 million gallons of crude spilled in a single day last year in the Lac-Megantic, Quebec, disaster.

A petition filed last week by the Sierra Club and ForestEthics asks the Department of Transportation to ban shipments of crude oil via older railroad cars. If the emergency order is granted, more than 20,000 tank cars of crude and 40,000 tank cars of flammable liquids would need to find another route. The Obama administration has promised to this month propose new rules governing the transportation of crude by rail.

Disclosures about oil shipments by railroad companies in June showed a strong demand for transportation by rail. The disclosure was part of an order by Transportation Secretary Anthony Foxx in May to provide information on shipments greater than 1 million gallons or more.

The rail industry has been proactive ahead of any potential legislation. After the Quebec tragedy, the industry reached an agreement with the U.S. Department of Transportation to reduce train speeds, increase the frequency of track maintenance, and install wayside defective equipment detectors.

The Congressional Research Service in May released a 28-page report detailing the problems with rail transportation and possible solutions, emphasizing the role of federal government in promoting safety and pipeline transportation. While a regulatory answer could still be years out, the increased scrutiny on rail transportation is underlining the need for faster pipeline growth.

Reaffirming my outlook on pipeline partnerships
The increasing use of rail to transport crude and petroleum products reaffirms my long-term outlook on pipeline partnerships. Even on surging capital expenditures, construction of pipeline infrastructure is not keeping up with demand for product volumes. Even with the buildout of other transportation methods (i.e., rail terminals), the industry is years away from meeting demand. This is positive for pipeline service contracts and positive for cash flow.

Enbridge Energy Partners (NYSE: EEP) has significant exposure to the Bakken shale and stands to benefit if regulations limit the amount of crude that can be transported by rail. The company has multiple projects that should increase capacity out of the region considerably, including the Sandpiper Pipeline that is projected to increase capacity by 225,000 barrels per day in 2016. Even without stricter rail regulation, the company should benefit from a dearth of transportation options for Bakken production.

Kinder Morgan Energy Partners (NYSE: KMP) has initiated a 50-50 joint venture with Imperial Oil (NYSEMKT:IMO) for construction of a 100,000 barrel-per-day rail terminal in Edmonton, Canada. The terminal is expected to be operational by the end of the year, with a second phase possible to expand capacity to 210,000 BPD.

While stricter rail regulations over the next few years and an eventual buildout in pipeline infrastructure may limit profits for the project, the near-term operations should find strong demand and boost cash flow.