Apple ( AAPL 1.57% ) shares closed Tuesday nearly flat, following a mixed third-quarter report that featured a few surprises. The company's report closely followed those of competitors Microsoft ( MSFT -0.85% ) and Google ( GOOG -0.46% ), and comes less than two months before the expected iPhone 6 launch. What were the product sales drivers of the third quarter?

The quarter's broad metrics were mixed, with both revenue and EPS falling near analyst estimates. Apple's third-quarter revenue was up 6% year over year to $37.4 billion. Profits grew 12% to $7.7 billion, or $1.28 per share. Apple's numbers were decent, though not astonishing, but a clearer picture now exists for the company's product revenue.

What Apple product line had surprise third-quarter growth, and what product continues toward its deathbed?

Product revenue
The third quarter saw a surprise improvement in Mac sales, which were up over 12% on the prior year's quarter to $5.5 billion, with 4.4 million units sold.

Sales of iPhones improved year over year, but dropped since the previous quarter as the expected release date of the new models draws nearer. So, what was the under-performing product line? 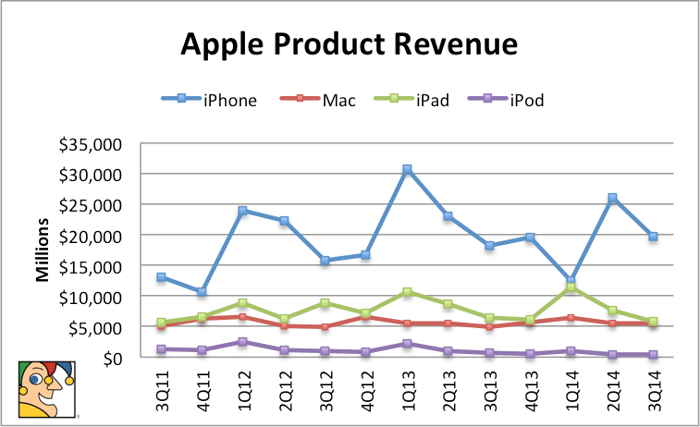 The iPad line has maintained steady sales, with spikes around the holidays and leveling off for the rest of the year. Third-quarter iPad revenue was down 8% to $5.9 billion with 13.3 units sold

Bringing up the rear, the downtrodden iPod line still couldn't catch a break with a 40% revenue drop to $422 million, with nearly 3 million units sold in the quarter. However, as a welcome, yet perhaps unexpected surprise, third-quarter numbers were an improvement over second-quarter iPod numbers.

Apple won't resort to putting the iPod line out to pasture. Last month, the company announced price slashes that drop the price tag on the 32GB iPod Touch by $50 and its 62GB brother by $100. Apple also rolled out an improved version of the 16GB Touch to include an additional camera and more color options. Later quarters will show whether those moves were enough to pump more life into the line's revenue growth.

Looking forward
The Wall Street Journal reported earlier this week that Apple had contacted manufacturers to order 70 million-80 million units for the iPhone 6 models, compared to the 40 million-50 million units for the 5s and 5c. Apple's orders reportedly include both rumored versions of the iPhone 6 -- including the 5.5-inch screen that's meant to lure customers away from large-screen smartphones such as Samsung's Galaxy S line.

Rumors have swirled that the 5.5-inch phone won't release in the fall with its smaller sibling due to production difficulties. Come September, it will be clear whether the rumors were true, since that's when Apple tends to debut new devices.

Competitor comparison
Microsoft reported fourth-quarter revenue of $23.4 billion with $0.55 EPS. Analysts had only expected $23.1 billion in revenue but Microsoft missed the $0.62 EPS estimate. The company currently has a market cap around $370 billion, with a 2.39% dividend yield and 14.2 forward P/E.

Google's recent second-quarter report included $12.7 billion in revenue and $6.08 EPS. Average analyst estimates were $12.3 billion and $6.24, respectively. The company has a market cap around $400 billion, with a 19.3 forward P/E and no dividend.

Foolish final thoughts
The third-quarter report held surprises in the profit gain and the improved sales of Mac products. Apple is currently in a holding period ahead of the iPhone 6 release, expected in September, so investor attention will remained focused on early launch numbers and the first quarterly report to follow.