Most industrial companies tend to be cyclical and economically sensitive, which reduces their attractiveness as investment candidates. But Pall Corporation (NYSE: PLL), a global leader in the high-tech filtration, separation, and purification industry offering solutions to filter and purify critical fluids, is one notable exception.

It has remained profitable and free cash flow positive in every single year for the past decade. As of June 2014, Pall Corporation has also achieved an impressive 12% growth in EPS (excluding the effects of foreign exchange movements) in a slow-growth environment.

Its stellar financial track record serves as the best evidence of its economic resilience and recession-proof consumables business model. Another company operating on a similar format is Xerium Technologies (NYSE: XRM), a supplier of industrial consumables and services in machine clothing and rolls and services.

High level of consumable sales provides recurring revenues
Pall Corporation generates approximately 90% of its sales from consumables, typically its proprietary filters. One example is its Ultipleat branded high flow filters which are usually used in multi-filter housings for processes like final product filtration in refineries to direct fluid flow.

Due to the wear-and-tear nature of filters, Pall Corporation benefits from repeat purchases of such products. Moreover, as the filters are used in day-to-day operations, the expenditures generally come from the client's operating budget (and not capital budget). This suggests that spending on Pall Corporation's filters is less likely to be cut in a recession.

The numbers speak of themselves. Except for the global financial crisis in fiscal 2009, when Pall Corporation's revenues declined by 9%, it has increased its top line in every single year for the past decade.

However, Xerium's financial track record is less impressive than that of Pall Corporation. Xerium has been loss-making in six of the past 10 years; and it generated positive free cash flow in only seven years in the past decade. This is because Xerium derives approximately one-third of its top line from non-consumables businesses such as the sale of roll covers. In contrast, non-consumables sales only makes up a mere 10% of Pall Corporation's revenues.

Other risk reduction strategies
The two biggest risks that any industrial company faces are technological obsolesce and industry-specific downturns. Pall Corporation actively minimizes these risks with its diversification and innovation strategies. 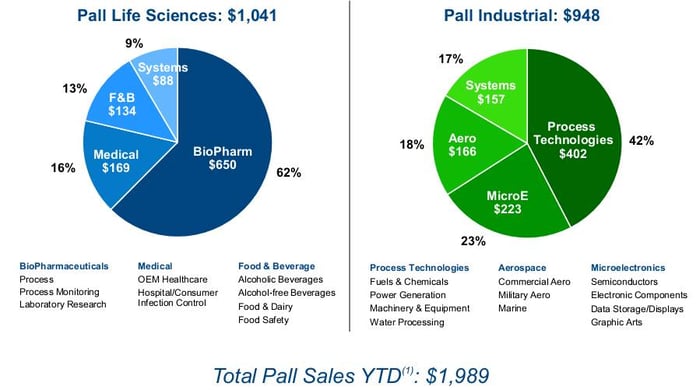 Firstly, Pall Corporation serves diverse end markets, ranging from biopharmaceuticals to aerospace. No single market accounts for more than a third of its sales, making it less vulnerable to negative issues in any particular industry.

Secondly, Pall Corporation has continuously invested in research and development to ensure that its products are disrupted by new technologies. It increased its R&D spend by 14% in 2013, which paid off with the introduction of 65 new products.

Shareholder friendly capital allocation policy
As a strong free cash flow generator, Pall Corporation has allayed concerns over the appropriate use of its cash flow with a optimal capital allocation policy. It has established a track record of returning excess capital to shareholders, having increased the amount of dividends and share buybacks over the past few years. In fiscal 2014, Pall Corporation is targeting to distribute 100% of its earnings to its shareholders, including $250 million in share repurchases.

Foolish final thoughts
Pall Corporation has distinguished itself from its cyclical industrial peers with its high level of recurring revenues from the sales of consumables. In addition, its end-market diversification policy, strong commitment to innovation and shareholder-friendly capital allocation policy make Pall Corporation one of the safest investments in the industrial space.