U.S. stocks were essentially flat on Thursday, though they did manage to achieve a new record high on the back of the benchmark S&P 500's less-than-one-point gain. The narrower Dow Jones Industrial Average (DJINDICES:^DJI) fell by just two-hundredths of a percentage point, while the technology-heavy Nasdaq Composite Index (NASDAQINDEX:^IXIC) was down by four-hundredths.

Not all stocks were quiet, however -- shares of SodaStream International (NASDAQ: SODA) rose by 9.4% to close at $31.63 on a Bloomberg News report that it is in talks with an investment firm to be taken private in a transaction that would value the Israeli home soda system manufacturer at $40 per share (the stock hit $36.54 on an intraday basis). Unfortunately, it appears that one investor may have received the news prior to its public dissemination and put it to use, earning a 3,000% return on a one-day trade. 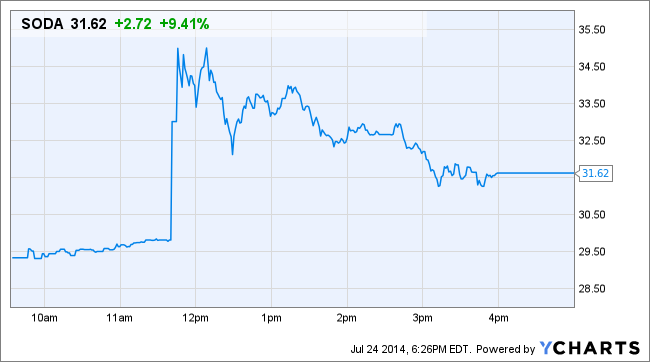 Here is the timeline of events:

The size, nature, and timing of the trade ought to create huge suspicion that the person behind it had access to the information contained in Bloomberg's report and acted on it prior to its publication. The combination of the $30 strike price and the fact that the options will expire tomorrow made them the perfect vehicle to implement a profitable trade based on that information. Regulators should be taking a hard look at this trade.

Beyond what looks like malfeasance, what of the report itself? Is SodaStream likely to be taken private by a buyout firm at $40 per share? I highly doubt it -- SodaStream simply doesn't look like a typical candidate to go private. As analysts at both Sifel Nicolaus and Deutsche Bank noted today, the visibility of its future cash flows is weak, which would be a concern for any potential private equity investor, as well as for the lenders that would finance the deal. Betting on the possibility of a deal may have worked for an unnamed trader today (or until the SEC comes knocking), but I wouldn't recommend fundamentally oriented speculation on SodaStream shares on that basis.