AT&T and Verizon often seem joined at the hip, but not today. One of the Dow's telecom giants is trading up while the other one heads down. How come?

The Dow Jones Industrial Average (^DJI 0.71%) is having another quiet session today, trading no more than 0.2% away from Wednesday's closing price at any point through early afternoon. But you can't say the same for the Dow's two telecom titans, which are running in opposite directions.

There's a two-part answer to that question.

First, and most obviously, AT&T reported earnings last night and largely failed to satisfy both analysts and investors. Wall Street expected Ma Bell to bag 800,000 new subscribers in the second quarter, but AT&T fell just shy of that estimate. As a direct result, both earnings and sales also disappointed.

So AT&T has its reasons for trading down today. But that's only half the story.

You might recall Verizon rising on its own earnings report earlier this week. Big Red edged past analyst projections, thanks to 1.4 million net new retail subscribers in its second quarter.

Forget the analysts for a second. This important part here is that Verizon added many more wireless customers than AT&T did. And that's despite AT&T putting its best foot forward, sacrificing profit margin in the name of higher revenue and subscriber additions.

These two stocks often seem joined at the hip, rising and falling in unison regardless of what the Dow or the broader market are up to. Not this time. There's a pretty clear power shift going on here, and Verizon is getting the better of its largest rival.

The American wireless market earnings picture will be complete next week, when the third- and fourth-largest networks report their latest results.

If you still care about the analysts I told you to forget a minute ago, Verizon scored at least one upgrade on its solid results. It's a little early to expect analyst actions on AT&T's more recent report, but early reviews call the earnings numbers "messy" and "worse than they appear."

This is not exactly a new trend, either. Have you seen how quickly Verizon is catching up to AT&T's larger revenue base? 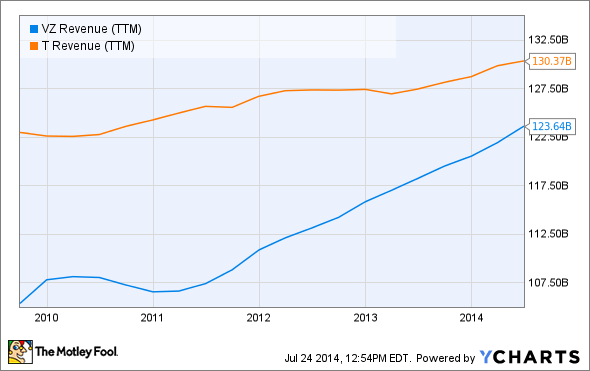 And it's been years since AT&T could match Verizon's operating profit margins: 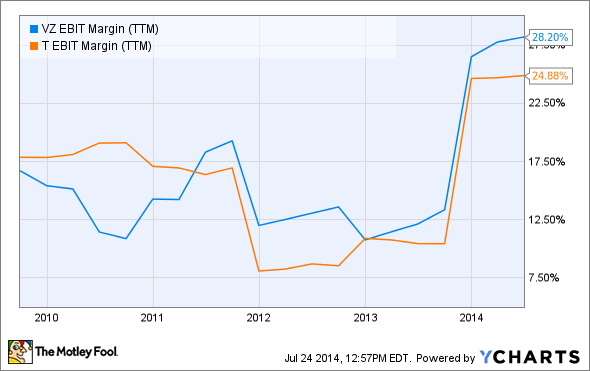 That one-two punch seems destined to make Verizon more profitable than AT&T, and soon. And that's just a few months after Verizon took full control of its moneymaking wireless network. That's a game-changing move that will put even more distance between these two Dow stocks in the long run.

I wouldn't necessarily buy either one of these stocks until the recent rash of proposed wireless mergers and acquisitions is sorted out. There's a far-from-zero chance that both Verizon and AT&T will lose out to smaller but hungrier rivals over the next couple years.

But put a gun to my head, and I'd rather own Verizon than AT&T today. And it looks like a lot of investors are reaching the same conclusion, for all the right reasons.