The weekend ending July 20th was somewhat mixed for movies produced by The Walt Disney Company (NYSE:DIS), Twenty-First Century Fox (NASDAQ: FOXA), and Comcast (NASDAQ:CMCSA). For the three-day period, Disney's Planes: Fire & Rescue saw a disappointing turnout while Twenty-First Century Fox's Dawn of the Planet of the Apes continued to dominate the box office. However, the most interesting film released over the course of the weekend appears to be Comcast's The Purge: Anarchy, which reported mediocre results but, given its low budget, may become a small cash cow for the company.

Disney's disappointment may be problematic
Over the weekend, Disney's Planes: Fire & Rescue saw box-office receipts of $18 million ($27 million with international receipts). Although this might be a nice chunk of change for people like you and I (especially I), the film's numbers came in notably lower than the $22.2 million the film's predecessor, Planes, recorded during its first weekend. Moving forward, it's possible that Planes: Fire & Rescue will see its ticket revenue climb, but with an estimated budget of $50 million, the film has a long way to fly before breaking even.

Twenty-First Century Fox goes primal... again!
While Disney performed badly over the weekend, Twenty-First Century Fox had a great weekend. Even though it was the film's second weekend at the box office, Dawn of the Planet of the Apes brought in revenue of $36.3 million. This, combined with the $73 million the film attracted during its opening weekend, brought the movie's gross box-office results to $139.2 million ($242.2 million with international figures) on a budget of just $170 million. 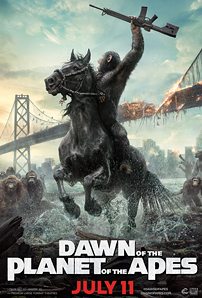 This showing significantly beat the $54.8 million the film's prequel, Rise of the Planet of the Apes, recorded for its opening weekend in 2011 on a budget of just $93 million. Even with this disparity, though, the film went on to report box-office receipts of $176.8 million ($482.9 million with international sales), so it's possible that Dawn of the Planet of the Apes could see its box-office number exceed the $500 million mark if it can maintain its momentum.

Comcast's big little money bag!
Finally, we arrive at what might be the most interesting film released over the weekend, The Purge: Anarchy, the sequel of The Purge. In its debut, the film brought in revenue of roughly $29.8 million ($30.2 million with international sales factored in), which handily outperformed Disney's Planes: Fire & Rescue, but fell short of Twenty-First Century Fox's Dawn of the Planet of the Apes.

Although this might seem like a lukewarm opening for the film, the Foolish investor should keep in mind that Comcast's (through Universal Pictures) thriller had an extremely small budget of just $9 million. While it's unknown how much of a cut the movie theaters will get from The Purge: Anarchy, the large divide between its opening weekend results and its budget implies that the first weekend alone might have been enough to turn a profit for Comcast.

Foolish takeaway
Moving forward, it will be interesting to see how all three of these films perform, but it's probably not too hard to proclaim Twenty-First Century Fox's Dawn of the Planet of the Apes and Comcast's The Purge: Anarchy success stories. Meanwhile Disney, with its relatively poor performance, shouldn't be surprised to see a writedown in its near future. In fact, the next time the business decides to release a sequel, it might not be a bad idea to consult either Twenty-First Century Fox or Comcast beforehand.