With the world’s largest e-commerce company falling more than 10% after supposedly weak earnings, here why the market’s flat wrong about Amazon.

It takes a genuine crisis of investor confidence to send the shares of a $150 billion company down more than 10% in a single day. But that's exactly the position e-commerce giant Amazon (NASDAQ: AMZN) found itself today. 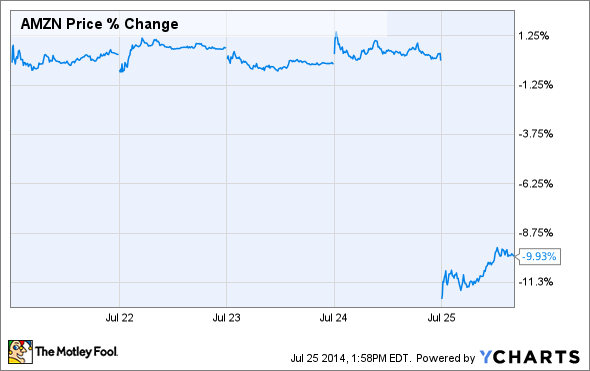 Despite meeting analysts expectations for top line growth, investors have once again grown frustrated by Amazon's consistent quarterly losses, particularly this quarter's loss of $0.27 per share (vs. estimates of a $0.15 loss). However, for 2 specific reasons, today's sell-off of Amazon stock reflects exactly the wrong kind of thinking when it comes to the world's largest e-tailer and creates a genuine opportunity for investors willing or bold enough to appreciate Amazon's unconventional, but outstanding, strategy.

Amazon: The long game is just beginning
On July 5th of this year, Amazon celebrated its 20th birthday, making it a veritable dinosaur in today's frenetically paced technology landscape. As one of the few surviving vestiges of the original dot-com bubble, Amazon has held a place in our collective consciousness for some time now, which is perhaps at least partially attributable to why investors insist on treating its quarterly results like that of any normal, mature 20-year-old company.

Perhaps the most underappreciated aspect of Amazon's investing narrative is the still-relative newness of its overall market. Because even as Amazon itself is a well-established company and brand, e-commerce as a category remains just a drop in the bucket of overall retail sales. For example, the Census Bureau estimated that e-commerce sales represented a minuscule 6.2% of all U.S. retail sales in the first quarter of 2014.

Especially considering the relatively advanced state of the U.S. e-commerce ecosystem versus key emerging markets like China and India, it doesn't take an overly active imagination to grasp the genuinely massive scope of Amazon's domestic and international long-term growth opportunities. So while Amazon has indeed been around for what seems like forever, the e-commerce boom, in which Amazon sits at the very epicenter of, has decades worth of continued growth to enjoy before approaching any semblance of maturity, which leads me to my second point.

The only 2 free lunches in retail
Amazon understands the above dynamic perhaps better than any other company in the world, and it's the appreciation of e-commerce's relative youth that drives Amazon's low regard for producing the kinds of quarterly profits that triggered today's sell-off.

Face it, the retail space isn't an easy place to make a buck, and it never has been. But as we've seen in other notable examples like Wal-Mart (NYSE: WMT), there are a few ways that a retail company can establish at least some semblance of a competitive advantage, and Amazon has embraced perhaps the largest two advantages -- price and service -- with ruthless dedication.

Of course it's not true across all product verticals (wedding rings are a notable exception), but in a macro sense, customers will choose to buy from the retailer that offers a desired good at the lowest price and/or requires the least amount of effort to obtain. Amazon is famous, or infamous depending on your perspective, for its willingness to lose money on nearly any transaction to win market share from a competitor. It's created innovative programs like 1-Click buying and Prime free two-day shipping to create the cheapest, most effort free model for consumers to acquire whatever they want when they want it.

From a quarterly report perspective, Amazon's chosen strategy is the equivalent of a self-selected war of attrition against the entire retail world. It's murder on the bottom line. But the more critical long-term agenda Amazon is more-or-less constantly pursuing is shifting customer purchasing habits away from the rest of the retail world and toward itself.

The Wal-Mart of the web
This model has famously built and then toppled retail empires for generations. Investors in the retail space like to extol the value of a given brand's cache with consumers, but that hasn't stopped retailers from Woolworth's to Circuit City for going the way of the Dodo when a more efficient competitor emerges to better serve customer needs.

Wal-Mart is undoubtedly the best non-Amazon example of the power of this dynamic, and I've found it instructive to think about Amazon as executing a Web-based version of Wal-Mart's brutally efficient business model while also leveraging some of the unique benefits of the Web as well. Out of the figures below, which set of gross margins would you guess belong to Wal-Mart and Amazon, respectively?

To save you from the suspense, company A is Amazon, and Company B is Wal-Mart. Because of its Wal-Mart-esque pricing power with its vendors, plus other higher-margin profit centers like online advertising, Amazon is now able to best the grand master of retail in wringing more value per dollar out of sales. It's also worth noting that Amazon's profit margins consistently sit in the red, versus somewhere in the ballpark of 3% for Wal-Mart.

Take it to the bank, Amazon could produce Wal-Mart-like profits quarter after quarter if it chose to. But Amazon's management, unlike shareholders today, understand that since e-commerce's long-term runway extends miles beyond its current scope, it needs to continue to press its only two advantages in order to fulfill its long-term potential. So while investors might gripe about Amazon's hundred-digit P/E ratio, that kind of commentary misses the mark entirely in the broader context of what Amazon is attempting to accomplish. In order for Amazon to truly become the "Wal-Mart of the Web," it will need to keep its foot on the gas for decades to come and enter more product categories than ever before. But the financial fruit that this will bear should easily trump any short-term losses -- and that's a fact worth remembering today.