Please ensure Javascript is enabled for purposes of website accessibility
Log In Help Join The Motley Fool
Free Article Join Over 1 Million Premium Members And Get More In-Depth Stock Guidance and Research
By Tyler Crowe - Updated Jul 9, 2019 at 8:06AM

Here's what you need to know about investing in the integrated oil and gas industry.

If you were to transport someone from 100 years ago to today, he or she would not recognize much, except perhaps the oil and gas industry. The basic principles of this industry have remained the same over the last century, and the largest players in the space -- ExxonMobil, Chevron, Royal Dutch Shell -- were just as prominent then as they are now.

Despite initiatives such as electric vehicles and alternative energy generation, oil and gas remain critical pillars of the global economy and will likely remain that way for many years to come. Since they are such critical aspects to our everyday lives, integrated oil and gas companies are an ideal place for long-term investors to park their money and not worry about it for decades. Why else would Warren Buffet invest billions in ExxonMobil?

Integrated oil and gas companies look like difficult companies to analyze, but in reality just a couple select areas are key for monitoring the health of the industry or a company. Let's take a brief look at this industry and what you absolutely need to know about it before investing a single dollar in the space. 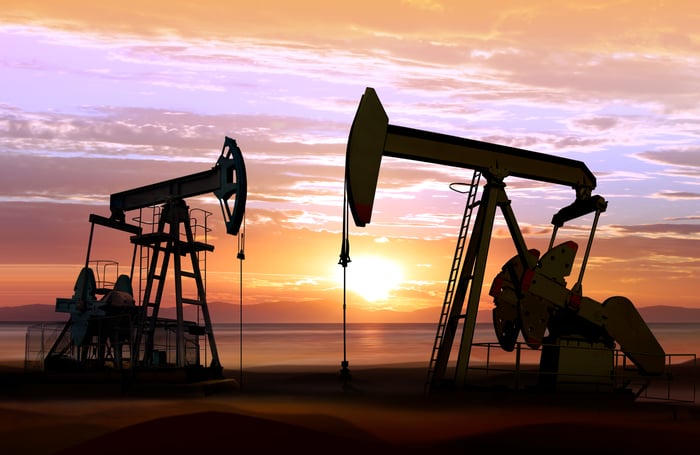 What is the integrated oil and gas industry?

There are several names for this particular industry -- Big Oil, super majors, integrated majors -- but essentially any company that is considered part of this space deals with the entire value chain of oil and gas. Their roles stretch from finding the initial oil or gas reservoir all the way to putting gasoline in your vehicle to supplying natural gas to your local utility. They have assets related to exploring and drilling for new sources of hydrocarbons, pipelines and other transportation infrastructure, refining and petrochemical manufacturing, and retail sales from the gas stations we see all over the place.

How big is integrated oil and gas in the world of oil?

The global oil and gas market is complex. It involves publicly traded companies that can operate in just one sub-industry, or they can be behemoth national oil companies that are responsible for every hydrocarbon molecule in that particular country from the day it is taken from the ground to the day it is exported or consumed. ExxonMobil is one of the largest integrated oil and gas company, with a market capitalization of nearly half a trillion dollars; however, it's still only the fourth-largest oil company in the world, behind a few of these national oil giants.

How does the integrated oil and gas industry work?

Integrated oil and gas companies operate in several business segments. Here is a brief description of each segment of the business:

Since production at integrated oil and gas companies is so large, they have to bring on hundreds of thousands of barrels per day of new production just to replace the declining production at older wells. This means they take on huge development projects that can cost billions of dollars. As the easy-to-access oil and gas reservoirs have become fewer and farther between, the per-barrel development costs of these projects have been slowly eating at the rates of returns of these companies for the past several years.

What are the drivers of integrated oil and gas?

The price of oil and gas, plain and simple.

OK, so that is probably a little too simplistic, but it is by far the most important driver of their business. All integrated oil and gas companies generate at least 75% of their total profits from oil and gas drilling and production. For these companies, a $1 change in the price of Brent crude -- the international benchmark price -- can alter hundreds of millions of dollars' worth of net operating income. This means that just about every decision related to capital allocation is linked to the price of oil and gas.

There are way too many things that can impact the price of oil on a daily, weekly, or even monthly basis to keep track of, and correctly predicting that price is just dumb luck. So for investors, it's better to focus on two simple things: demand and development costs. Global oil demand has grown 2.2% on a compounded annual basis since 1965; that growth level appears likely to persist for many years, as demand in non-OECD countries is expected to double between now and 2030. Oil demand is basically the bellwether for economic health, so as long as global economic health is maintained, oil demand will increase.

Development costs will be the major determining factor in profitability for an individual company. There are plenty of sources of oil out there, but it is becoming more expensive to develop them, and several companies in the space have seen major development project costs blow past original estimates. These expenses can have a profound impact on the return on capital for these companies, so investors should keep a watchful eye on whether companies are delivering new projects on time and on or near budget.

The Motley Fool recommends Chevron, Statoil (ADR), and Total (ADR). Try any of our Foolish newsletter services free for 30 days. We Fools may not all hold the same opinions, but we all believe that considering a diverse range of insights makes us better investors. The Motley Fool has a disclosure policy.