T-Mobile (NASDAQ:TMUS) is nothing if not brash. Over the past couple years the company has taken AT&T (NYSE:T) and Verizon Communications head-on, essentially forcing both companies to change their pricing strategies in order to keep up with T-Mobile's aggressive offerings.

This week T-Mobile's kicks-off its latest strategy. Starting on July 30 the company is offering a four-line family plan with 10GB of data, 2.5 GB per line, for just $100. That's $60 less than AT&T and the other major U.S. carriers. Customers have to sign up for a Simple Choice Plan over the next two months and the data level drops to just 1GB per line in 2016.

It's a good deal for customers, at least in the short term, but it could prove a great deal for T-Mobile in the long term.

Gaining customers and more revenue
Part of T-Mobile's strategy is to lure customers in with great deals, and then sell them additional data later. It's similar to the company's free tablet data for life deal, which gives cellular tablet owners 200 MB of free high-speed data for as long as they have their tablet. The hope is that users will quickly surpass that amount of data each month and then pay for more. 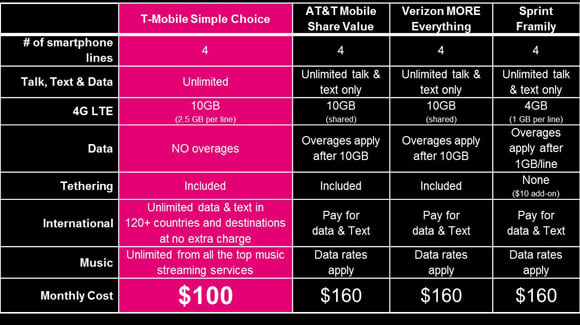 How T-Mobile's family plan stacks up to competitors. Source: T-Mobile

The same goes for this latest family plan deal. T-Mobile hopes users will get used to the 2.5 GB of data, and then once 2016 comes around they'll pay more money each month once the data allotment drops to 1GB per line.

T-Mobile needs its subscribers to pay more money on the plans they currently have because last quarter the company's average revenue per user (ARPU) dropped about 8%. Right now T-Mobile brings in about $50 in revenue per subscriber and it needs that number to go up.

Based on those numbers, it's clear the company's subscriber acquisition strategy is working. Those new customers helped boost T-Mobile's revenue 15% year over year, but the company posted a net loss of $151 million, down from its profit of $107 million a year earlier.

And that's why T-Mobile needs its new family plan strategy to work. The company has had no problem adding new subscribers, but it needs to grow ARPU in order to drive its profits back up. Later this week T-Mobile will post its Q2 results, and hopefully we'll see the average revenue per user increase. If it does go up, it'll likely be a slow progression as some of the company's strategies go into effect.

But with the latest $100 family plan offering, it appears T-Mobile is content to build its customer base even stronger before it focuses too much on ARPU. And in the end, the company may be able to do both. T-Mobile's churn rate, the percentage of subscribers it loses each quarter, is just 1.5%. If it can maintain this low churn rate and ultimately convince its subscribers to pay just a little bit more each month, T-Mobile will not only eat into AT&T's customer base, but will be profit handsomely as well.