Agriculture is an industry we interact with almost every day and rarely think about how it works. Food fills grocery shelves across the country and around the world, but before it does, the seeds must be sown, and livestock must be fed. For the companies that make sure this happens, there are incredible opportunities in agriculture.

What is agriculture?
Agriculture at its core is the cultivation of plants and animals into food and other goods that sustain human life.

Included in the industry are the seeds that become crops, pesticides and herbicides that protect them, and machinery that goes into the field. Ranchers who raise animals use some of these crops for feedstock and provide food products as well.

The industry's outputs are sold to food and clothing processors and end up on grocery shelves, served in restaurants, make the clothing on our backs, and exported around the world.

How big is the agriculture industry?
Agriculture and related industries contributed $775 billion to the U.S. economy, and about $4 trillion globally, according to the most recent data from the U.S. Department of Agriculture. Farms, forestry, fishing, and related activities accounted for about $200 billion, while manufacturing and serving food, beverage, and clothing accounted for the rest of the industry. 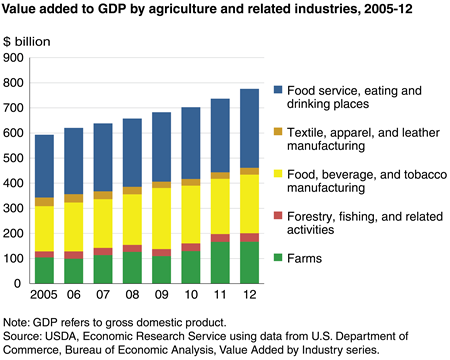 Most of these agriculture goods come out of the Midwest, although California is the largest agriculture product producers, with 11% of the country's production. 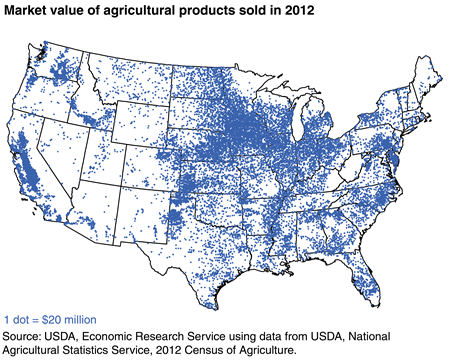 Agriculture and related industries also employed 16.5 million people, 9.2% of the workforce, and accounted for a $37.1 billion trade surplus in 2013. No matter how you slice it, agriculture is big business in the U.S.

How does agriculture work?
As simple as growing crops seems, there's a lot of technology that goes into it. Companies like Monsanto and Dupont are some of the largest suppliers of seed, pesticides, and herbicides and have put millions into research that results in higher-yielding crops.

This doesn't come without controversy, though. Genetically modified organisms and designer crops have been a big part of increased crop yields around the world, but they have come under political pressure as organic foods become more popular. Investors buying into the agriculture industry need to understand that this is both an opportunity and a risk, particularly for seed companies.

Once harvested, crops are sold to ranchers to feed animals or downfield industries that produce food, clothing, and other products.

Since there's a limited amount of quality land for producing crops, this is a limiting factor for the industry. To compensate, farmers try to increase yield, or produce more product from a smaller amount of land. Without advancements in yields over centuries of farming, we could not feed the more than 7 billion people on the earth today. 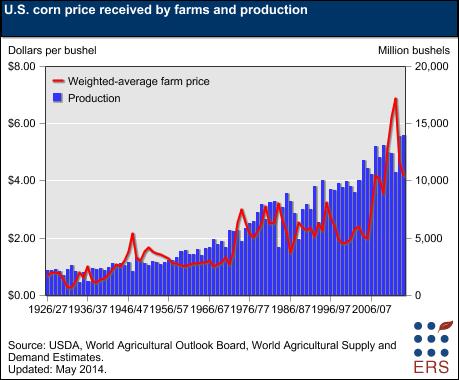 Chart of corn prices and production. Source: US Department of Agriculture.

While yield increases output, demand changes the mix of products farmers make through changing prices on publicly traded futures markets. High-priced crops will draw more planting, and visa versa. For example, as ethanol has grown as an automotive fuel, it has pushed corn prices higher. This has increased production for the crop as farmers work to increase revenue.

The agriculture industry is a massive part of the U.S. and global economy, but it rarely gets the publicity it deserves. For investors, a key to making money is buying companies that can push crop yields higher for farmers, because that's where the money is.