The big supercruiser motorcycles seem to gain most of the headlines. Polaris Industries (NYSE:PII), however, understands that women and new riders represent the key to future growth, and the 2015 model of its 69 cubic inch, 1133 cc V-twin Indian Scout, which it unveiled at the annual Sturgis, S.D. Motorcycle Rally last week, shows the company is looking to compete in those two markets.

Polaris is on the warpath with its all-new-for-2015 Indian Scout. Source: Indian Motorcycle.

Harley-Davidson's (NYSE:HOG) Sportster has long been seen as a classic cruising bike, perfectly built for those two demographics. Women Riders Now, for example, ranks three Sportster models among its best top-nine cruisers for women just starting out riding. Last year, Harley unveiled its own strain of new, smaller bikes, the Street 500 and Street 750, and said it was targeted toward younger, urban riders.

Harley currently has a commanding lead in aming its "outreach customers" -- women, African-Americans, and Hispanics. IHS Automotive data indicates that Harley's market share among Caucasian women exceeds 62%, is more than 54% with African-American men and women, and is almost at 60% among Hispanic men and women. Perhaps more impressive is that its nearest competitor in each of those categories fails to break into double-digit percentages.

Women, though, might be the linchpin of it all. The latest statistics from the Motorcycle Industry Council show that they've become quite a force in riding:

Harley doesn't say exactly how many women buy its bikes, but Bloomberg News estimates that around 20,000 bikes will be sold to them this year.

I'll admit to being a fan of almost all of Harley's big bikes (though my wife is wearing my Softail Deuce on her left ring finger these days), but the Indian revival, particularly the Scout model, renews my appreciation for this classic line of bikes, and could cause some disruption in the industry.

Much like Harley did with its Street bikes, Indian has given the new Scout an identity all its own, not going back to its heritage, but building on it.

The Scout was one of Indian's most popular bikes during the three decades between 1920 to 1950, becoming a preferred choice for racers and performers. There was a seemingly half-hearted attempt to resurrect the bike more than a decade ago, between 2001 and 2003, but that ended when the whole company collapsed and it wasn't until ATV-maker Polaris bought the nameplate in 2011, and introduced three all-new Indian-branded motorcycles based on historic styling, that it once again became a nameplate to be reckoned with. 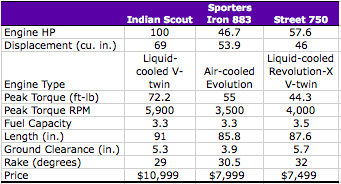 Measure-for-measure, the Scout leads the pack, but it comes at a price. Source: Indian Motorcycle, Harley-Davidson.

With its size, lean, and rake, the Scout is perfect for the new target demographic giving Harley a run for its money. The new Indian's fat front tire provides balance, the handlebars are a good fit for ease of grip and steering, and the transmission provides for a smooth shift experience. But don't think of it as just a "starter bike." That 100 horsepower and 72 foot-pounds of torque is a cool, muscular ride for experienced riders as well.

The lightweight bike holds to the road, and Motorcycle USA says its goes smoothly through its gears without clunking and thunking, with the V-twin letting you accelerate higher without red-lining.

Yet, as much as the Scout has received rave reviews -- Cycle World gave its Reader's Digest version of its first-ride review as "Buy it! The Scout rocks." -- it could still face challenges in unseating Harley for the throne. With an MSRP of $10,999, it is Indian's cheapest bike; but it's more expensive than both Street models or its Sportster, as almost all of its models start at thousands of dollars less.

The Scout in its native environment. Source: Indian Motorcycle.

The Scout, though, gives the rider extra power, extra muscle for that higher price tag and could very well be the better value. It may be Indian's first real effort at stripping market share of the key growth customers from Harley-Davidson.