Ever since we at Rule Breakers started talking about 3-D printing back in 2007, we've thought that giving users the power to design, develop, and print out parts could revolutionize entire industries, including traditional manufacturing, prototyping, and even fashion.

Since then, the industry has grown rapidly. 3-D printer manufacturing sales (which include the printers, consumable materials, and maintenance) rose from $1.2 billion in 2008 to an estimated $2 billion in 2013. Throw in service and software, and many experts expect the industry to keep growing as rapidly as the printers can churn out custom-made widgets. Consulting firm Wohlers Associates says consolidated revenue from 3-D printing could grow to $10.8 billion by 2021. Morgan Stanley lays out an even rosier picture, with a bull scenario that projects $21 billion of 3-D printing revenue by 2020. At that pace, the overall industry's annual growth rate would be a hearty 34%.

The first 3-D printing company we recommended to our members was Stratasys (NASDAQ:SSYS) in 2008. It was $22 a share then; now it's a five-bagger. We recommended Stratasys a second time in 2012 and have since brought members 3-D printing peer ExOne (NASDAQ:XONE) and industry cousin Proto Labs (NYSE:PRLB). Each has outperformed the market. In Stratasys' and Proto Labs' cases, it's been by a wide margin.

The euphoria has been great for shareholders, but you know what comes next: Now, even your grandmother is calling the sector overvalued. Many financial pundits think the stock prices have outpaced earnings growth, creating 3-D printing relative valuations that are significantly higher than the rest of the market. Volatility also remains high, with the stock prices of many 3-D printing companies moving in tandem with others and with swings often triggered solely by analyst recommendations or quarterly earnings news.

I don't think so. Let's take a look at where sales of 3-D printers are going today: 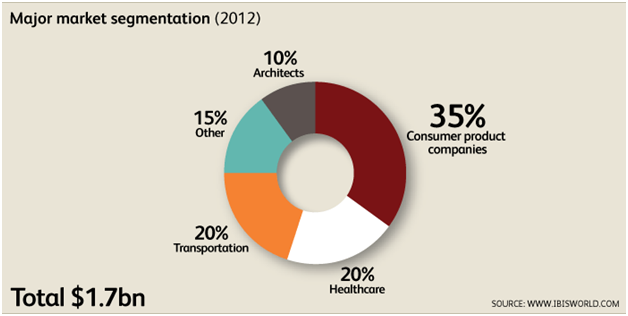 Keep in mind that this is still a small base: 3-D printer sales were only $1.7 billion in 2012. Even with aggressive growth expectations, however, this is but a rounding error compared to the nearly $1.2 trillion that industries in the U.S. alone commit annually to capital expenditures. We're not trying to imply that 3-D printing will come to dominate the U.S. economy, but hopefully the point is clear. With huge markets in manufacturing, health care, and many other industries, there is still a lot of room to run.

Continued adoption of 3-D printing will be driven by demonstrating value to customers. Here are a few industry-specific challenges just waiting for a 3-D solution:

About That Fear and Uncertainty...

Of course, we can't be certain that 3-D printing will spread. But remember that uncertainty can also be an investor's best friend. After all, if everyone already knew what the future holds, there would never be any opportunity to profit from it. There's plenty to suggest that the 3-D printing wave is actually just getting started.

Windermere Associates developed a concept known as the "buyers' hierarchy" that explains how new technology gets adopted by users in multiple stages:

The combination of the above leads many businesses to follow an S-curve of earnings through their existence. Profits are very slow (or nonexistent) at first, followed by a few golden years of extremely rapid growth, and finally a stable plateau. The process can easily run for several decades, if not centuries.

Many industries are just now discovering what 3-D printing could mean for them. We're still in the very early early innings of this game -- likely corresponding to the early adopters' phase.

In addition to the companies already on the Rule Breakers scorecard, others are beginning to make a name for themselves in specific niches. Arcam (NASDAQOTH: AMAVF) uses high-grade titanium to produce aerospace parts and medical implants. Organovo (NASDAQ:ONVO) is developing the field of bioprinting to create human tissues. Larger companies, such as 3D Systems (NYSE:DDD), are spreading broader bets and consolidating across multiple markets.

We've already seen some phenomenal returns from 3-D printing companies. But with continued adoption -- driven by the ability to solve industry-specific problems and to progress to different stages of the buyers' hierarchy -- we believe that there is still plenty of opportunity ahead for investors.