ExxonMobil is pretty much synonymous with oil and gas. A former component of the Standard Oil Trust, Exxon has transformed into an integrated oil and gas giant that produces more than 4 million barrels per day of oil and natural gas equivalent. As one of the world's largest players in the energy market, ExxonMobil has made many investors a pretty penny over the years. And it could continue to do so for years to come.

Let's be clear, this isn't a prediction on ExxonMobil's share price for next week, a couple months from now, or even a year or two in the future. Rather, it is a case that buying stock in ExxonMobil will over time generate strong returns for investors who are willing to buy and hold. Based on that investment thesis, here are three reasons for optimism when it comes to shares of ExxonMobil.

1) A large, diversified set of prospects to increase reserves and production

As much as ExxonMobil wants to say it is a diversified oil and gas company, the truth is that oil and gas production is the beating heart of the entire company. It may generate high returns on capital from refining and chemical manufacturing, but that is a bit of balance sheet magic as the value of the facilities has depreciated significantly over the many years the company has owned those assets.

Also, the amount of income brought in from refining and chemical manufacturing is puny in comparison to oil and gas production. For the past five years, upstream production has provided more than 80% of ExxonMobil's earnings, and the amount of money being invested in new production versus downstream manufacturing indicates that this trend will likely continue. So if ExxonMobil wants to grow, priority No. 1 is to replace its declining asset base and boost production.

Finding new oil and gas sources isn't an exact science, so large producers need to hedge their bets by having several prospects in the works at any time. Based on Exxon's development portfolio, the company seems to be doing just that. 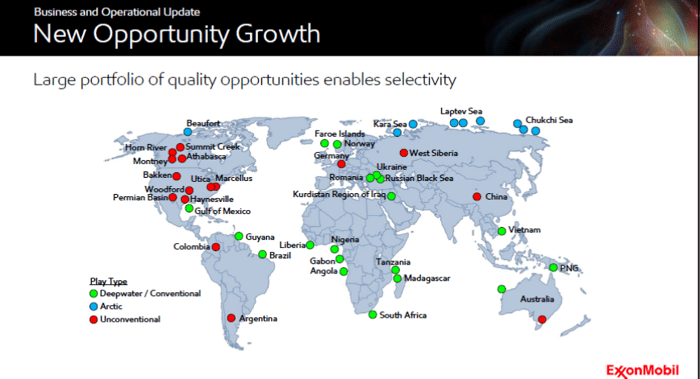 With projects and prospects from oil sands in Canada to massive Arctic oil and gas fields in Russia, Exxon has plenty of irons in the fire to keep production going for quite some time. According to the company's most recent investor presentation, ExxonMobil has over 90 billion barrels of oil that are either proved reserves, projects in the design phase, or under evaluation. Even if only half of those speculative projects were deemed viable, they would more than adequately replace its current asset base. 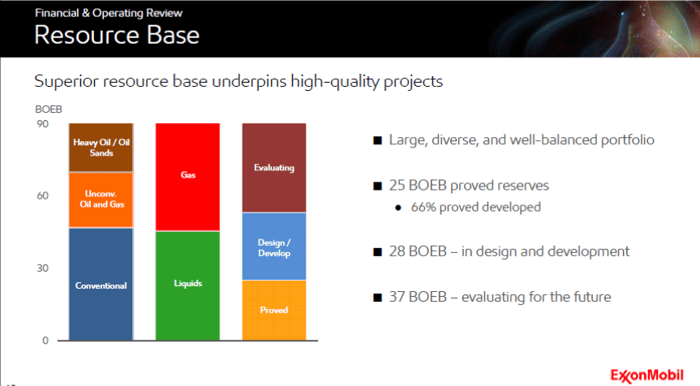 2) Demand for oil and gas to remain strong for decades

Investors, analysts, and media outlets have given loads of attention to how the rise in alternative fuels and improving fuel efficiency will drastically reduce the need for oil in the long term. While the concept makes sense, it is missing one key element: the advancement of the developing world. According to BP's statistical review of world energy, 2013 was the first year ever in which oil consumption from non-Organization for Economic Cooperation and Development nations surpassed that of OECD nations. According to projections from the U.S. Energy Information Administration, energy demand from these states is expected to double between now and 2030. 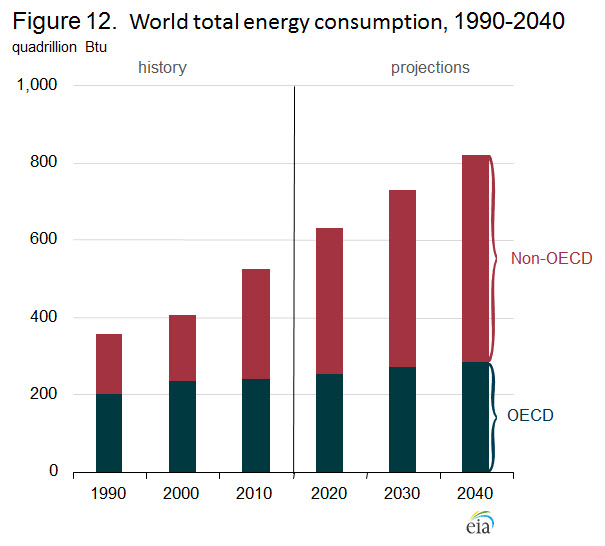 Although alternatives will play a large role in filling that need, oil and gas will remain the top providers of energy over this time frame. Exxon and the EIA project oil and gas demand to roughly increase by 30% and 50%, respectively, over the next 25 years. 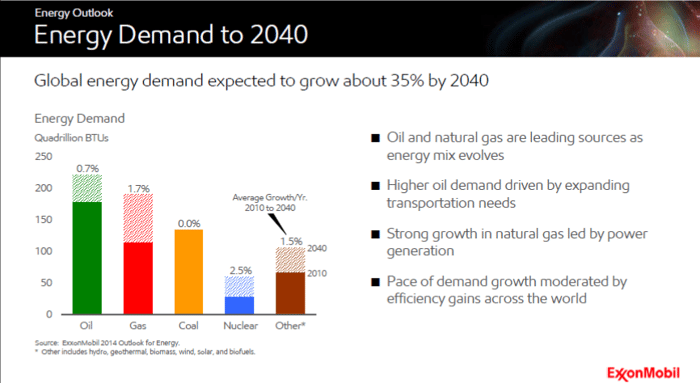 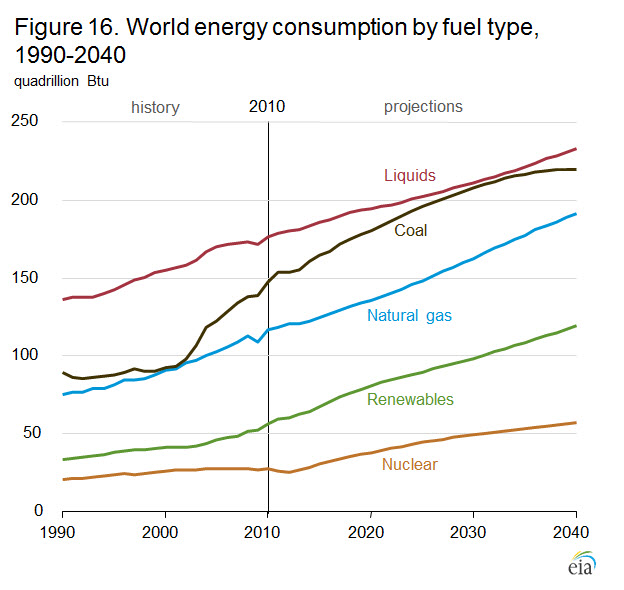 With all its plans in the works to grow production, ExxonMobil will probably not have any issues finding a market for it anytime soon. That could change, though, if any major developments in alternative energy generation occur that make widespread conversion away from oil and gas economically lucrative. Since that hasn't yet happened, demand will remain robust for years to come.

In the short run, the market is a voting machine but in the long run it is a weighing machine.

Graham's quote is based on the idea that a company's shares will appreciate in value as its earnings increase. While this is certainly the case with ExxonMobil, the company can also increase the value of its shares in a relatively flat earnings environment. This is because the company generates loads of free cash. In 2013, it generated $49 billion in operational cash flow, which gave ExxonMobil more than $10 billion in free cash.

With so much in excess to its operational needs, ExxonMobil has been able to maintain a robust dividend and reduction of share count through buybacks. Even including Exxon's 2010 equity issuance to complete the acquisition of XTO Energy, management has reduced overall share count by close to 40% since the initial merger between Exxon and Mobil back in 1999. 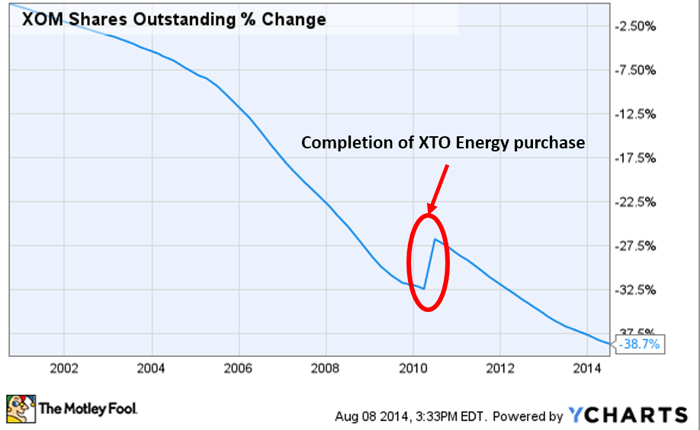 This matters in the grand scheme of things because it translates to greater earnings per share -- and therefore greater value per share -- despite what many would consider modest growth. Even though total earnings at Exxon have risen by less than 10% over four years, reductions in share count have led to an increase in earnings per share of more than 20%.

Combine this with a dividend that has plenty of room to grow, and the total return on Exxon shares will likely remain robust for any investor, even during weaker economic climates.

Remember, if you are looking to invest in ExxonMobil, then you should be thinking on a very long-term basis. Companies like ExxonMobil must make capital allocation decisions decades in advance, so sometimes year-to-year numbers may look rather bland in between major capital projects. However, the long-term outlook for oil and gas demand, Exxon's suite of projects under review, and the friendly way it has treated shareholders over the years are three very good reasons why the company's shares could rise well beyond where they are today.