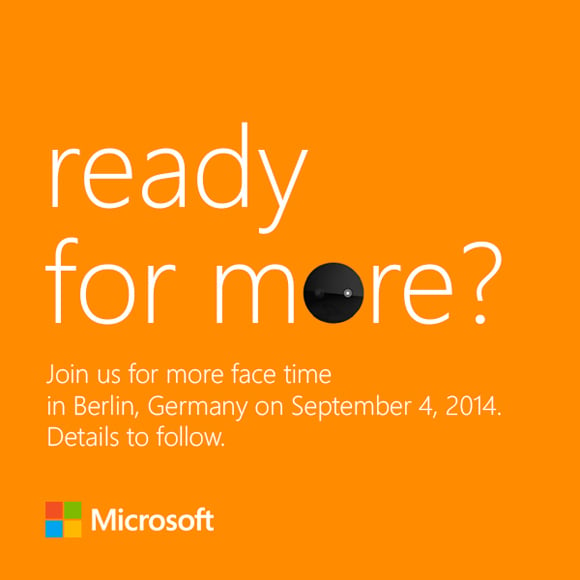 Microsoft (NASDAQ:MSFT) is in a serious time of transition. The company recently completed its acquisition of Nokia devices, its new CEO, Satya Nadella just laid off 18,000 employees, and the company is in the middle of killing off Nokia Android phones and feature phones so it can build its Windows Phone brand.

To further its mobile efforts, the company just announced it's launching a new phone, or two, on Sept. 4, one day after Samsung's (NASDAQOTH: SSNLF) new phablet debuts and five days before Apple (NASDAQ:AAPL) unveils new iPhones.

With the company trailing far behind in the U.S. smartphone market, can Microsoft's new device be the smartphone success it needs?

Earlier this week the company sent out a cryptic invitation to tech journalists to "Join us for more face time." And just last week an internal memo was leaked in which Stephen Elop, the former CEO of Nokia and current executive vice president of devices at Microsoft, talked about two new Lumia phones.

Elop called the first device, supposedly codenamed Superman, a "selfie phone" and sports a 5 megapixel front-facing camera with a 4.7-inch display. That's about four more megapixels than the Lumia 929's front camera and three more than Samsung's Galaxy S5. The device will likely be called the Lumia 730, and images of it have already surfaced.

The 730 will be the next iteration of Nokia's current Lumia 720 shown here. Source: Nokia

In addition to the 730, a new higher-end device may debut as well, possibly the Lumia 830. The device is rumored to have 20-megapixel PureView camera with optical-image stabilization and ZEISS lens, and a 4.5-inch display.

Right now, it appears the Lumia 730 is the most likely to launch at in a few weeks, though the other device may show up too.

What Microsoft's up to

The upcoming phone is a big deal for the company. Microsoft is in middle of doubling down on the Lumia brand and it needs this device to spark a turnaround for its Windows Phone platform.

In a recent statement, Elop said, "We will be particularly focused on making the market for Windows Phone. In the near term, we plan to drive Windows Phone volume by targeting the more affordable smartphone segments, which are the fastest growing segments of the market, with Lumia."

He went on to say the company will introduce lower-cost Lumia devices running the Windows Phone operating system, while the company transitions away from other devices like the Nokia X, which ran Android. The Verge recently reported Microsoft is also killing off the low-end Asha line, which runs an operating system by the same name.

While lower-end Lumia devices will take on emerging markets, the upcoming 730 will hit the U.S. and developed markets head on. But despite its specs, the new phone is facing some big hurdles.

A perfect storm of competition

It's not an exaggeration to say Apple's rumored Sept. 9 launch is one of the most anticipated iPhone events to date. The company is expected to introduce completely new display sizes for its phone -- 4.7-inches and 5.5-inches -- after years of sticking with smaller displays. Aside from the larger sizes and new specs, the devices could play a big role in a new Apple mobile payment system.

As if that weren't enough, Samsung's new Note 4 shows up just a day after the new Lumia phone debuts. The new Note is one of Samsung's flagship devices, second to its Galaxy S5, and is expected to have a 5.7-inch display, Qualcomm's Snapdragon 805 processor, a 16 megapixel rear camera and a 3 megapixel front-facing camera.

It's easily argued that even if Microsoft chose a different time of the year to launch its new device, the competition would be no less fierce. Heck, even Amazon.com recently threw a high-end smartphone into the mix.

But while all device makers face competition, Microsoft is battling stagnant market share in the U.S. as well, one of its key markets for midrange to high-end devices.

The latest ComScore data shows Microsoft with just 3.4% OS market share in the country, with no change since February.

While that's bad news, I think the company still has more time to turn its smartphone business around. Microsoft just closed the deal to acquire Nokia's devices and services, and is now beginning its new plan to focus on Lumia phones. That's going to take several quarters to get right -- if it does get it right -- so we're not going to see the results until somewhere in 2015.

On top of that, back in April the company finally merged together apps from its Windows Store and the Windows Phone Store so applications will work across both platforms. This too will take some time to reap the benefits.

While the Lumia 730 won't be Microsoft's flagship device, its release is coming at a pivotal time for the company. If the new device resonates enough with consumers, it could be the strong foundation Microsoft needs to move its handset business forward. But if it fails to deliver, Microsoft will continue to have the shaky smartphone foundation it's had for several years.

Part of the Lumia's success will be in hitting the midrange market and avoiding the high-end space occupied by Samsung and Apple's flagship devices. The device is expected to come with a $240 price tag and will also sport Microsoft's new smart assistant, Cortana, which could give the Lumia an initial boost due to sheer novelty of the new feature.

But in the end, consumers will decide whether the Lumia 730 will help turn Microsoft's mobile ambitions around. That's a lot of pressure to put on a new phone, but at some point Microsoft is responsible to actually get its handset business right -- and the time is now.