Because of the incessant saber-rattling that Vladimir Putin is conducting on the borders of the Ukraine, his annexation of Crimea, and his support for the rebels accused of shooting down a Malaysian civilian airliner, the West has joined forces and imposed sanctions on the country, a move that hasn't set well with the Russian president.

He recently retaliated against sanctions, such as those President Obama imposed on oil giant Rosneft and AK-47 maker Kalashnikov Concern, by turning around and banning virtually all food imports from the U.S., Canada, and Europe. While the sweeping edict is sure to play havoc with U.S.and Western farmers in the short term, as Russia relies heavily on imports, it's more likely the Russian people will feel the brunt of its impact as store shelves go bare.

But with countries outside Western-bloc nations looking for more markets to expand into, they could lose their competitive advantage. So here's a look at who may be some of the biggest losers and winners arising from this contest of wills.

The losers
Although Cargill and Tyson Foods (NYSE:TSN)are two of the biggest U.S. exporters of beef and chicken, respectively, the ban will have little practical effect on their operations. First, Russia had already banned U.S. beef imports last year and only imported about 267,000 metric tons of chicken, or some $309 million worth, which the Chicken Council says is about 7% of total U.S. poultry export volume. Tyson says it's disappointed by Russia's decision, but doesn't "expect the pact to be significant since the volume we ship there can be absorbed by other global markets."

Similarly, Sanderson Farms (NASDAQ:SAFM) says that even though it shipped $40 million worth of chicken to Russia last year, or 87.5 million pounds, it's already found new markets for its birds.

Pork exports are even less than poultry, and though they more than doubled by June from $16 million last year, the industry has suffered from bans before due to issues with the use of ractopine, a drug used to fatten up hogs and cows before slaughter. In fact, the total value of U.S. food and agricultural exports was only $1.3 billion in 2013, or less than 1% of all farm exports. 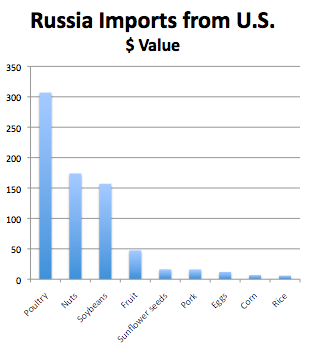 Poland's apple growers export half of their production to Russia each year, and Finland is worrying that its struggling economy may turn into a crisis, as 10% of its output is shipped to the Federation, its third-largest export market.

And the winners
In short, the loser list is relatively small, but the winner list may not be much larger. Some markets like Brazil are already benefiting from the sanctions the West impose. Brazil counts Russia as a large destination for its beef, pork, and poultry products as it is, but according to its Association of Meat Exporters, beef exports rose 19% last month to $692 million, while meat export volumes surged 79% to 41,000 tons.

But it is still taking some creativity to do so, as Russia previously imposed a ban on Brazilian meats because of food safety concerns. Moreover, meat packers like JBS (OTC:JBSAY) have facilities in both the U.S. and Mexico that are covered by the ban, though it says it will use plants spread out across a diverse geographic landscape to meet the new demand. For example, it has eight facilities in Brazil that have been approved for exports, and has more plants elsewhere.

Certainly, ties between U.S. exporters that were only recently reestablished have been torn apart again. But beef, pork, and chicken producers are in the midst of a protein popularity contest, where shortages were causing prices to skyrocket. If foreign markets can't be found for their products (though producers say they've already located them), there will be plenty of domestic consumers willing to buy them up.

In the end, it seems all that Putin has done is hurt his own people. Analysts see western sanctions raising interest rates in Russia and causing inflation -- already running at around 7% -- that will sting consumers more sharply. As always, it is the people who pay the price for the actions of their leaders.

Are There Any Winners From Russia's Ban on U.S. Imports? @themotleyfool #stocks $TSN $SAFM $JBSAY Next Article
Current