The calm following the gun control legislation storm has led to a slowdown in firearms sales, and that's going to be central to gun makers determining where they site their manufacturing facilities. Beretta just announced it was taking all of its manufacturing jobs out of Maryland by 2015 because of that state's tough new gun laws, and both Sturm, Ruger (NYSE:RGR) and Smith & Wesson Holding (NASDAQ:SWBI) may find it more expedient to follow suit as fewer gun sales pressure them to protect the jobs they currently provide.

Maryland was one of the states that rushed to enact tough new gun control legislation in the wake of the tragic Sandy Hook school shootings, but is finding now that its knee-jerk response will have consequences. Beretta said that instead of just its new machinery and production of new firearms moving to gun-friendly Tennessee, as it previously declared, all Maryland manufacturing jobs will flee south. Taking into consideration Maryland's attempt to ban gun manufacturing altogether -- and the possibility such measures could be resurrected in the future -- it was prudent to protect its jobs and ensure that sales to customers like the U.S. military weren't interrupted. The military's M9 9mm pistol, for example, is made at its Maryland plant.

While the company's statement said it has no plans to relocate its office, administrative, and executive support functions from their current location in Maryland, does anyone really believe they won't soon follow the manufacturing jobs south?

Firearms sales are slowing now that the threat of new gun control measures has been largely pushed aside. Both Ruger and Smith & Wesson saw slack demand hit operating earnings and the stocks of both gun makers have tumbled from their 52-week highs. Ruger is down 30%; Smith & Wesson, 20%.

As business ebbs away, they'll need to ensure their jobs are well protected from grasping legislatures. Finding more hospitable climes for their facilities will be essential for uninterrupted manufacture.

Ruger made its first major expansion in over two decades last year, and it didn't happen in its home state of Connecticut, but rather in North Carolina. Perhaps as Beretta will also ultimately determine, even having a corporate headquarters in an anti-gun state is not worth the while or the revenues it brings into the state.

Beretta and Ruger, of course, are not the only gun makers pulling up stakes and leaving hostile states. Across the country, firearms manufacturers are voting with their feet, with PTR Industries and Stag Arms leaving behind Connecticut and Kahr Firearms and Remington Arms escaping from New York. Magpul Industries abandoned Colorado even though its voters recalled two state senators who had voted in favor of more restrictive gun laws.

Yet without fear being one of the primary motivators for gun sales, sporting goods stores like Dick's Sporting Goods and Cabela's are also reporting steep declines in sales. The FBI, as well, reports the number of background checks it's done for individuals wanting to buy firearms has dropped from the previous breakneck pace. 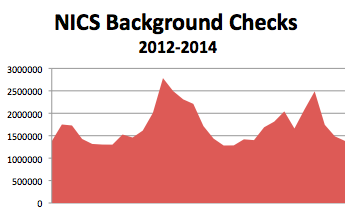 But it won't take much to spur sales again. President Barack Obama just unilaterally banned the sale of Russian-made AK-47s, ostensibly to punish Kalashnikov Concern for its country's support of Ukrainian rebels who allegedly shot down a civilian Malaysian passenger aircraft last week. Although there are a lot of caveats to the ban -- basically so long as Kalashnikov isn't party to the sale, individuals can still buy and sell them -- the fact that the sporting rifle has been high on the list of targets of gun control activists for a long time could send gun owners and enthusiasts scrambling to stock up now.

Beretta's race for the border won't occur until mid-2015 so as not to disrupt shipments to customers, but it also won't be the last gun maker to beat feet. With good manufacturing jobs at a premium as unemployment remains persistently high, even Sturm, Ruger and Smith & Wesson will be forced to consider a state's attitude toward their business and conclude that domiciling in those that appreciate the jobs and revenue they provide is best for their business and their investors.