Please ensure Javascript is enabled for purposes of website accessibility
Log In Help Join The Motley Fool
Free Article Join Over 1 Million Premium Members And Get More In-Depth Stock Guidance and Research
By Rich Duprey - Apr 14, 2013 at 11:45AM

One of the most powerful statements you can make and one of the most important freedoms you have is to vote with your feet, to just get up and move somewhere that better respects your rights. Gunmakers under assault from those who would limit a citizen's Second Amendment rights are doing just that: They're picking up their manufacturing facilities out of states that have passed restrictive gun ownership laws and walking to freedom in states with a strong tradition of protecting gun rights.

A call to arms
Connecticut gunmaker PTR Industries announced that it will leave the state in response to the new law just signed that gives Connecticut some of the strictest gun laws in the country. While it will review over the next six weeks the entreaties it has received from other states and plans to have the move completed by year's end, it also encourages other gunmakers in the state to follow its lead and move elsewhere.

"We are making a call to all involved in our industry to leave this state, close your doors, and show our politicians the true consequences of their hasty and uninformed actions," the company stated.

And PTR is not alone. Two other Connecticut-based munitions makers, Stag Arms and Ammunition Storage Components, are weighing whether they have the shoe leather to make a move. Ironic, as it comes from a state whose motto is qui transtulit sustinet, or "he who is transplanted still sustains."

Don't mess with Texas
Nor is this confined to Connecticut. Italian gun manufacturer Beretta is actively considering leaving Maryland because of the restrictive new laws it passed, while Magpul Industries is leaving Colorado.

Texas, in particular, has gone out of his way to woo gun and ammunition makers, sending letters to dozens of them inviting them to relocate. Mississippi as well is trying to entice gun manufacturers from Colorado, Connecticut, Maryland, Massachusetts, New Hampshire, New York, and North Carolina.

Shooting out the lights
Sturm, Ruger (RGR -0.85%) and Colt Defense are two major gunmakers headquartered in Connecticut that have yet to take a stance on voting with their feet, though they've undoubtedly benefited from the heightened concern over gun control. Ruger recently reported a 52% jump in fourth-quarter sales, while revenues at rival Smith & Wesson Holding (SWBI -0.91%), which is located in nearby Massachusetts, saw revenues surge 39% in the most recent quarter. Although the FBI cautions that background checks don't equate into gun sales on a one-to-one basis, one report suggests that based on National Instant Criminal Background Check System data, there were almost 22 million background checks between Jan. 1, 2012, and Jan. 31, 2013, which translates into one every 1.6 seconds! 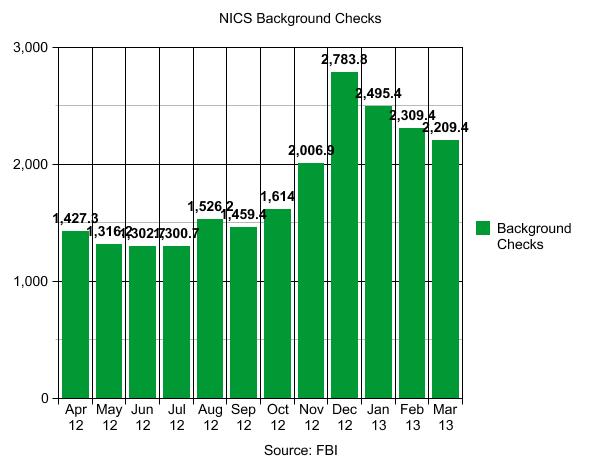 There's a sense that the industry cannot accept the attacks being waged against it any longer. Greater numbers of manufacturers and distributors are taking the position that if their products are illegal for citizens of certain states to own, then they won't sell them to the government, either. Almost 150 gun and ammo dealers have agreed to stop selling their wares to police departments in states, counties, and municipalities that have enacted restrictive gun laws.

Right on target
It's beginning to have an impact. With Homeland Security making huge bulk ammo purchases, fears of stricter controls causing hoarding, and many manufacturers not selling ammunition in anti-gun states, police departments around the country are finding it difficult to obtain ammo for their officers. Some departments have cut back on firearms training as a result, while others are resorting to bartering to get the ammo they need.

The firearms industry has long been targeted for retribution every time a tragedy has struck, and this time they've decided to fight back. When your rights are being trampled, sometimes walking away from a fight can send an even more powerful message.