Each year 4% of the total energy produced in the United States sneaks out of our windows. That might not sound like a lot, but stopping this leakage could reduce energy loss in the average American home by 30%-50%. One force being used to stop this expensive energy leakage is a precious metal few would probably expect: silver.

Silver has the highest electrical conductivity of any element and the highest thermal conductivity of any metal. It's also the most reflective metal in the world. That thermal conductivity and reflective nature make silver an important component in energy-efficient windows known as low-emissivity, or low-e, windows. For perspective, uncoated glass alone has a thermal emissivity of 0.91, meaning it lets in not only the visible light from the sun but also infrared light and ultraviolet light. Infrared light, which is also known as heat energy, transmits heat into a building while ultraviolet light is what causes materials to fade. Silver's thermal emissivity, on the other hand, is 0.02, meaning it's like Fort Knox when it comes to infrared light.

Low-emissivity glass uses a very thin layer of nearly invisible metals , including silver and tin. The layer of silver is only about 10-15 nanometers thick, or less than a human hair. However, worldwide about 100 metric tons of silver is used each year in windows. This layer glazes the surface of the window to control the heat that is transferred through the window.

In hot climates the coating reflects the sunlight's infrared heat and ultraviolet radiation, which keeps it from entering homes. This keeps houses cooler as the heat from the sun isn't warming up the space that homeowners are trying to keep cool. Meanwhile, in winter months this glazing reflects heat back into the home so less escapes through the window. In cooler climates, low solar-gain, low-e glass can contain two or three layers of silver to block heat transmission to the outside. Like a coffee thermos, which also uses silver, it keeps the warmth inside.

In sun-drenched areas like the South, low-e windows act like sunglasses for the home. The tinting is clearly visible from the outside, so windows appear shaded. Not only does this keep the home cooler inside, but it acts as an extra layer of privacy for the resident. However, from inside the home the sun's natural light still shines through, meaning that lamps or overhead lights aren't usually needed during the daylight hours.

Save energy and save money, too
Most new homes built today come standard with low-e windows. They are one of many energy-saving features that make new homes 30% more energy efficient than existing homes. Owners of existing homes can also enjoy these energy-saving benefits by swapping out old single-pane or double-pane windows for new low-e windows. As the following map shows, the annual energy savings can be substantial. 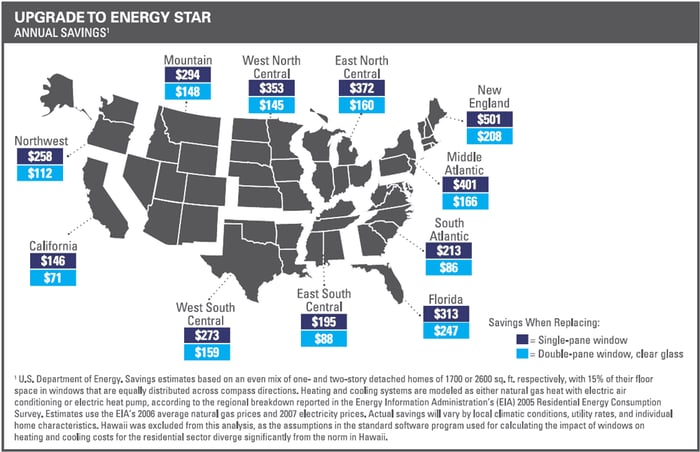 The only problem with replacing existing windows is that it requires a fairly large up-front investment. In many cases the return on that investment isn't very compelling if the savings and cost don't line up. For example, my parents live in upstate New York and were looking at getting triple silver low-e windows to keep the heat inside their home during the brutally cold winter. However, the estimates to replace all 18 of their windows was a pretty steep $18,000, which was a reduction from the astounding $54,000 that was first quoted. Given that their heating bill is around $2,000 per year and they already have double pane windows they would only save about $330 per year according to the Department of Energy's savings chart. This translates to a nominal payback period of 54 years - a questionable investment at best. That being said, home owners with old single pane windows the return on investment can be more reasonable.

There are, however, other options for homeowners looking to save money without installing new windows. Low-e storm windows can be installed in conjunction with existing windows. The Department of Energy cites installing exterior storm windows with a low-e coating as one of its energy savings projects: It's an easy and cost-effective option that will enable a homeowner to save money on energy bills. On average, low-e storm windows can save a homeowner 10%-35% of annual energy bill. For a consumer who spends $1,000 each year in heating or cooling costs, this could add up to $350 per year in savings. Given the cost of $60 to $200 per storm window installation, the return on investment could be quite compelling depending on the number of windows in the home.

Final thoughts
Silver has long been one of the earth's most precious metals. Many of today's homeowners are finding silver to have another valuable property in preventing energy, and therefore money, from sneaking out of their homes. This is why many Americans are investing in silver-glazed low-e windows as it can be a cost-effective way to keep their homes warm in winter and cool in summer.