Soft drink giant Coca-Cola just took a 17% stake in energy drink veteran Monster Energy. What's in it for each partner in this $2.2 billion deal?

Mighty Coca-Cola ( KO 0.89% ) is hedging its bets in the explosive market for energy drinks. The company will invest $2.15 billion of pure cash in Monster Energy ( MNST 0.89% ), building a 16.7% equity stake in the energy drink specialist, the companies announced Thursday. The two companies will also shuffle a few brands back and forth, making Monster a pure play on energy drinks, and leaving Coke entirely outside that market.

What's in it for the partners in this billion-dollar agreement?

Coke has handled Monster's North American distribution since 2008, when the companies signed a 20-year agreement. A patchwork of third parties has been shipping Monster's energy drinks internationally. Now, the drinks get to ride shotgun in Coca-Cola's worldwide bottling and distribution networks.

Monster will be Coke's exclusive energy drink partner, with a significant shared financial interest. Investors should expect Coke to help Monster with the marketing required to break into new geographies. Monster still has a lot of international growth left to explore, as only 26% of the company's 2013 sales fell outside U.S. borders.

Moreover, Coke gets to place two directors in Monster's boardroom, expanding the board size to 10 members. I've been asking for a move like that since 2007, because Monster, nee Hansen, always looked like it could use some high-quality guidance on topics like global expansion and retail network operations.

Coke takes a new approach to energy drinks
To be frank, many investors have been expecting Coca-Cola to simply buy Monster Energy outright ever since that long-term distribution deal took effect in 2008. This chart illustrates why: 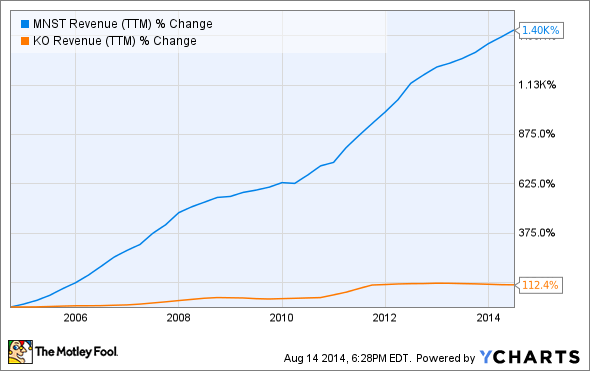 The energy drink market has essentially been a two-horse race from the start, with Monster and Red Bull taking turns in pole position. All major soda bottlers have taken a swing at this exciting growth opportunity, including Coke, but all have failed to keep up with the leaders.

Independent brand Rockstar holds its own with a 10% U.S. market share in 2013. But that's still a far cry from Red Bull's 43% share and Monster's 39% stake, and other energy drinks work out to a rounding error.

Just as Full Throttle et al. couldn't move the needle for Coca-Cola, the brands that Monster will ship over to Atlanta haven't been important to that company for many years. I'm secretly wishing for renewed nationwide distribution of the old Hansen's Natural Soda products, but I'd be shocked to actually see it on local store shelves even now.

The Foolish bottom line
All things considered, this is a big simplification move for both Monster and Coke. Each company gets to focus on its natural strengths and draw top-shelf support from its new bosom-buddy partner.

In my eyes, this is a win-win agreement where both sides get something they should have asked for, oh, six or seven years ago. And investors seem to agree: Monster shares jumped more than 30% in Friday morning trading while  Coca-Cola shares rose as much as 2.4%.