There are no two ways about it -- Pittsburgh International Airport is broke. Years of airline consolidation has reduced the number of flights into and out of the airport by 50% over the last 10 years, and now Pittsburgh International is getting crushed under the weight of its debt. In an effort to lower landing, terminal, and ramp fees and attract new carriers to generate more revenue, the Iron City's once-bustling airport struck a deal with CONSOL Energy to drill for natural gas underneath its 9,000 acres. The agreement includes a $50 million signing bonus, and the potential for $20 million a year in royalty payments.

It's all been done before
The idea of drilling for oil and gas beneath an airport has been done before, at both Dallas-Fort Worth International and Denver International. The difference with Pittsburgh is in the potential revenue generation from royalties. Here's what authorities expect PIT to generate, compared to the 2013 revenue from DFW and DEN: 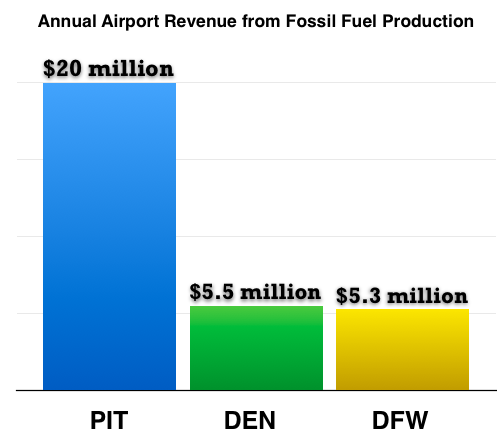 There are a few key reasons for such a wide differential in revenue, ranging from the number of wells onsite, to the age of those wells, but by far the biggest factor is the underlying formation at any given airport.

In Pittsburgh's case, the airport rests on stacked formations that include the Marcellus Shale, offering CONSOL Energy a rich drilling opportunity: 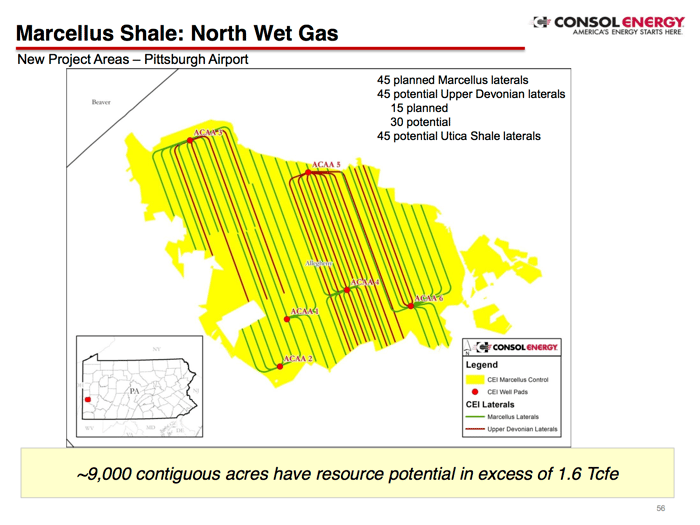 CONSOL Energy estimates that there is more than 1.6 trillion cubic feet of natural gas equivalent sitting under the airport's acreage. The airport is the only landholder the company has to deal with to exploit the 9,000 acres, making negotiations a breeze and turning this into an extraordinary opportunity for CONSOL Energy.

Though the company's firm plans call for six well pad sites and a total of 47 wells targeting the Marcellus, the potential exists to drill the Upper Devonian and Utica shales as well. The Marcellus Shale is the immediate focus, because right now it is far and away the most productive natural gas play in the U.S.: 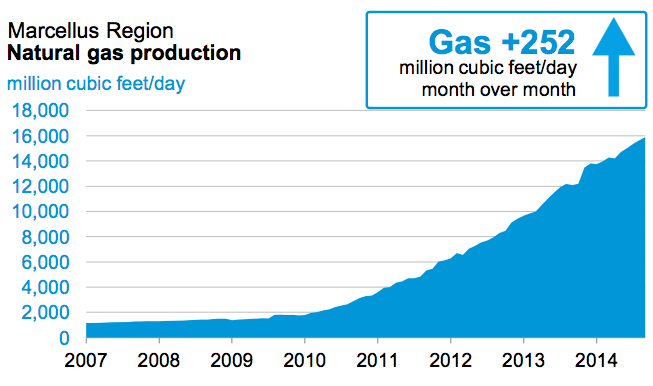 The above chart paints a stark contrast to the Barnett Shale, home to the Dallas-Fort Worth wells, that produces less than 5,000 million cubic feet per day. Once the leading shale natural gas field, the Barnett is falling short of new emerging natural gas plays.

There are no guarantees
All that said, it is fair to be skeptical of this arrangement, especially if you are leery of fracking to begin with.

When Dallas-Fort Worth inked its initial deal with Chesapeake Energy in 2006, the project was thought to be much more lucrative than it currently is. In 2008, its first year of drilling, the airport's royalties totaled some $33.9 million. Then the price of natural gas collapsed, plans for more wells were scrapped, and royalty payments declined, falling to $6.2 million in 2012 before hitting $5.3 million in 2013.

So when authority figures, and journalistic outlets like The New York Times, write statements like "After...natural gas royalties kick in, the airport will receive about $20 million a year..." they really mean "could" receive $20 million a year, because there are no guarantees in the oil and gas game. CONSOL Energy's drilling plans run until 2018, leaving plenty of time for plans to change and prices to fluctuate.

Bottom line
Pittsburgh International Airport is caught between a rock and a hard place right now, and it just so happens that there is a lot of natural gas trapped there, too. If the airport is able to generate the revenue it anticipates from natural gas drilling, it may be able to lure more airlines to its gates, which would work wonders for the long term health of the airport, and the city's economy in general.