The EPA's newest energy plan could crush the coal industry -- but it's not set in stone, yet.

The Obama Administration has it out for coal. The EPA's new Clean Power Plan is cutting coal's cost advantage to push power beyond dirty fossil fuels. But states and corporations are fighting back, and it's still unclear who will win this bureaucratic battle. Here's what you need to know.

Cutting out coal
On June 2, the U.S. Environmental Protection Agency (EPA) announced a "commonsense plan to cut carbon pollution from power plants." While other plans have beat around the climate change bush by imposing limits on arsenic or mercury emissions, this is the first time the EPA has directly targeted carbon, the primary greenhouse gas culprit behind climate change.

Rather than impose direct caps or limits on emissions, the EPA has developed an algorithm that allows each state to balance carbon emissions with their current power generation portfolio. The Brookings Institute visualized the new plan in a series of simple equations pitting emissions rates per MW against total current generation:

Number crunching aside, the new policy pits clean energy against dirty energy like never before. The message is clear: Start cleaning up your act by 2020 or face federal wrath.

The good, the bad, and the ugly
The proposed plan has been both lauded and loathed. For environmentalists, the Clean Power Plan marks a major win. Power plants are the single largest greenhouse gas polluters, accounting for around one-third of our nation's total emissions. 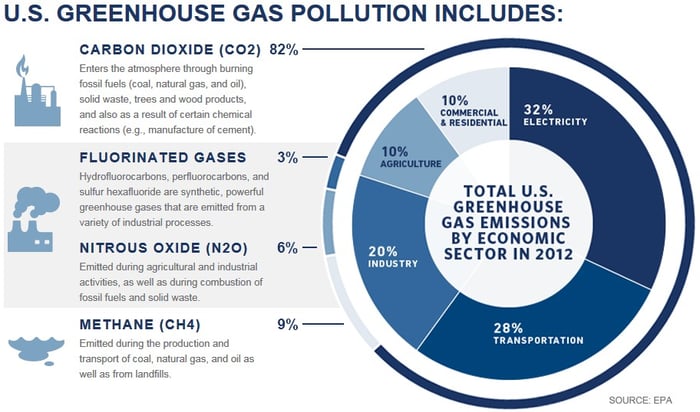 If all goes as planned, "steady and responsible steps" (quoted from the EPA's press release) will put the U.S. in a significantly cleaner position by 2030:

Not a bad list -- but not everyone's elated. States and corporations are leveling lawsuits at the EPA, challenging the legal right and economic validity of such an unprecedented plan. Among the challengers are Alabama, Indiana, Kansas, Kentucky, Louisiana, Nebraska, Ohio, Oklahoma, South Dakota, South Carolina, West Virginia, and Wyoming, as well as Murray Energy, the U.S.'s largest privately held coal mining company.

This lawsuit represents another effort by our office to invalidate the EPA's proposed rule that will have devastating effects on West Virginia's jobs and its economy. Our Office will use every legal tool available to protect coal miners and their families from the Obama Administration and its overreach.

Other states and corporations are worried that their own new standards will force similar cutbacks. According to the Bureau of Labor Statistics, the coal industry directly employs 80,030 Americans with an average hourly wage of $26.15. The West Virginia Coal Association estimates that in their state alone, coal creates 20,000 direct jobs, 70,000 indirect jobs, and over $6 billion of economic growth.

Coal ain't cut yet
The EPA's new policy is well-intended. With the right push, our nation's energy portfolio can clean up its act. But critics suggest that the plan asks for too much, too fast. But with unclear legal precedent, contentious benchmarks, and corporate backlash, the plan isn't set in stone, yet.