The year was 1934. After lots of coaxing, the American Can Co. finally persuaded Krueger Brewing to try selling its beer in steel cans. It worked, and by the end of 1935 23 different brewers were selling their beer in steel cans, which were easier to sell because they were lighter and more compact than bottles and quicker to fill.

Steel, however, was pushed out of the market in the 1970s after Coors (NYSE:TAP) developed the first aluminum beer can. These were cheaper to produce, even lighter in weight, and took less time to chill. The nationwide switch to aluminum cans created a major structural demand shift for the aluminum industry.

That same structural shift is about to happen again. This time, the Ford (NYSE:F) F-150 is replacing 1,500 pounds of steel with 900 pounds of aluminum in the all-new 2015 model. With this shift, aluminum appears poised to slowly take over the auto industry, much like it took over the beer can industry a few decades ago.

Aluminum has slowly been pushing steel out of cars for decades. In 1975 less than 100 pounds of aluminum could be found in the average car. Today that number has risen to 343 pounds of aluminum. That is expected to grow to 550 pounds over the next decade, as illustrated by the following slide from an Alcoa (NYSE:AA) investor presentation. 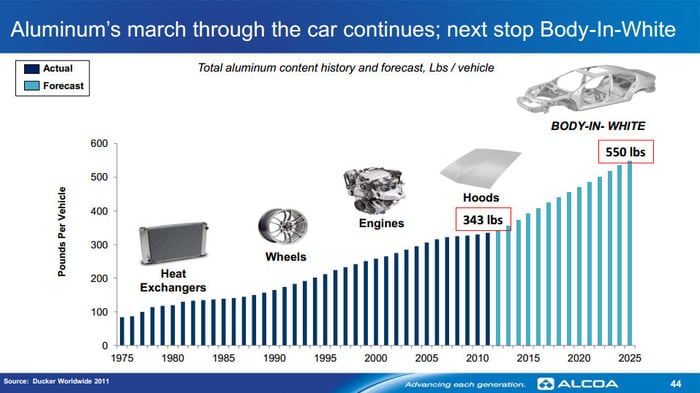 Aluminum is taking over for steel in cars because it's lighter in weight, yet just as strong. Lighter cars get better fuel economy. In fact, every 10% reduction in weight improves a vehicle's fuel economy by 7%. And the auto industry has few options other than replacing steel with aluminum to help meet U.S. CAFE standards, set to double from 2011 to 2025. Because of this we will likely see other automakers join Ford and accelerate the switch from steel to aluminum.

It's more than just losing weight
Aluminum might be light in weight, but it isn't a lightweight when it comes to comparing it with steel. In fact, it has several additional competitive advantages over steel. Aluminum is actually safer, as an aluminum-intensive vehicle can reduce stopping distances by up to seven feet when going from 45 mph to zero. Furthermore, unlike steel, aluminum body panels are naturally resistant to corrosion, making them much more durable and longer lasting. Finally, because aluminum reduces a vehicle's weight it makes the car more energy efficient and therefore more environmentally friendly by reducing carbon dioxide emissions. These features are why Ford sees aluminum as the best choice for its newest F-150, as the following slide notes.

Ford isn't the first automaker to use extensive amounts of aluminum. However, because aluminum costs up to three times as much as steel, it has largely been reserved for the luxury segment in vehicles such as the Audi A8, Jaguar XJR, and Tesla (NASDAQ:TSLA) Model S. Ford's shift to aluminum is a big deal because the F-150 is so popular, with last year's model selling 700,000 units. If the new model can maintain that sales pace, other automakers will likely follow Ford's lead and use more aluminum. If that happens, the market for body sheet aluminum alone could go from $300 million per year to over $7.5 billion annually as aluminum steals sales from steel.

Driving the point home
The auto industry faces a daunting task in meeting toughened vehicle fuel economy standards over the next decade. This leaves the industry with few choices but to replace as much steel with aluminum as it possible. This puts the aluminum industry and companies like Alcoa in the driver's seat as steel is pushed out of another American icon.