Just about everyone can understand the basic investment thesis behind buying ExxonMobil's stock: The company produces oil and gas, we need and pay lots of money for it, and this will likely remain the case for many years to come. Nonetheless, you might wonder whether buying shares of ExxonMobil is the best investment you can make. So let's look at ExxonMobil's stock from the perspectives of performance and valuation compared to some of its peers.

ExxonMobil's case that it's the best of the bunch

One achievement ExxonMobil's management hangs its hat on is its track record for capital allocation. The energy giant over the years developed a reputation for maintaining steady capital investment levels through good times and bad, which has worked out rather well for it. Exxon has consistently been ahead of its peers when it comes to return on capital. For the past five years, ExxonMobil's return on capital employed has been above 20% -- a fantastic number for a capital-intensive business like oil and gas -- and at least 5 percentage points higher than its competitors. 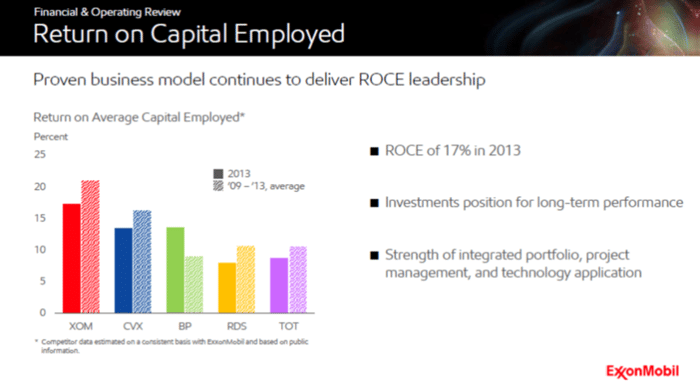 If there is a concern here, it's that the company's return on capital numbers have faltered over the past few years. However, there are some reasons this might not be a major concern:

As long as ExxonMobil can bring these projects to fruition without incurring massive budget overruns -- cough, Kashagan, cough -- it should maintain its reputation as the best capital allocater in the business, which makes for a pretty compelling investment.

While we always need oil and gas, this business can be very cyclical, and investors can get burned buying at the wrong times. At first glance, shares of ExxonMobil look pretty cheap, trading at a price-to-earnings ratio of 12.55, which is significantly lower than the Robert Shiller P/E ratio for the S&P 500 of 25.4. If we dig deeper into the numbers, though, the situation doesn't look quite as lucrative. One thing to consider is that the energy space historically has been priced at a lower rate than the broader market. The Shiller P/E ratio for just the energy sector is 15.8, which indicates ExxonMobil is not as cheap when compared to the rest of the industry, as well as some of its peers.

Also looking from a historical standpoint, shares of ExxonMobil aren't very far off its median values for most metrics.

Perhaps you want to be really smart and timely with your purchase of shares in ExxonMobil and get a better value than Warren Buffett did when Berkshire Hathaway purchased shares of the company. After all, this is a cyclical business and there is the chance that prices could swing with the whims of the industry. Buffett made the majority of his $3.4 billion purchase in the second quarter of 2013; here is what the approximate average valuations for ExxonMobil looked like during that period:

This may not be a foolproof method for establishing a time to buy shares of ExxonMobil, but it's a pretty good one.

The biggest question when looking at ExxonMobil is this: what is your investment time horizon? If you only plan on holding the stock for a year or two, there are probably much better opportunities that will likely see larger earnings or share price growth over that time frame. If you are looking to build wealth over the very long term, though, there aren't many companies in a better position to do that than ExxonMobil. It has what Warren Buffett would call a massive economic moat thanks to its size and position in a must-have market. Any investor looking at a 20-year investing time horizon should give serious consideration to buying shares of ExxonMobil, holding on to them, and letting dividend reinvestment take care of the rest.

One thing to consider, though, is that Exxon shares are not trading at as large a discount as you might expect based on its valuation relative to the broader market. Investors looking for value might not find it in shares of ExxonMobil today, but that doesn't mean you should shy away from the stock. Instead, it's worth holding a little extra cash in your portfolio for the opportune time when shares are trading at a larger discount than today. You may need to wait for a while, but your patience could be rewarded.