Would you like a clementine with that? Photo credit: Wikimedia Commons.

It's been nearly three years since McDonald's (NYSE:MCD) began including apple slices and smaller portions of fries in its Happy Meals. And just last month, the fast food chain began offering a low-fat version of Yoplait's strawberry Go-Gurt as an alternate side.

But McDonald's isn't done with its kid-centric health kick just yet. A USA Today report just confirmed that Cuties clementines from Sun Pacific will be made available as a seasonal fruit option for Happy Meals beginning this fall. According to Greg Watson, McDonald's senior VP of menu innovation, the test inclusion of the easy-to-peel fruit at 100 restaurants around Austin, Texas, resulted in "overwhelmingly positive" feedback.

McDonald's has offered Go-Gurt as an optional side since July. Photo credit: McDonald's.

In addition, "junior" bananas from Chiquita are already being tested in some markets, and blueberries and grapes are under consideration as future seasonal options. The fruit won't be restricted to Happy Meals, either; clementines were also priced individually at $0.50 during McDonald's tests.

But the move shouldn't come as a complete surprise. When McDonald's partnered with the Alliance for a Healthier Generation last September, it not only pledged to "only promote and market water, milk, and juice as beverages in Happy Meals," but also promised to use Happy Meal packaging and designs to "generate excitement for fruit, vegetable, low/reduced-fat dairy, or water options for kids." And given the virtually unrivaled global reach McDonald's enjoys, even the smallest changes can make a huge difference in positively affecting the health of millions upon millions of consumers.

The move could also have a positive impact for McDonald's investors. Shares have been in a food coma over the past year as comparable restaurant sales growth has remained sluggish, with comps decreasing 2.5% year over year in July even as the S&P 500 returned nearly 18% over the same period: 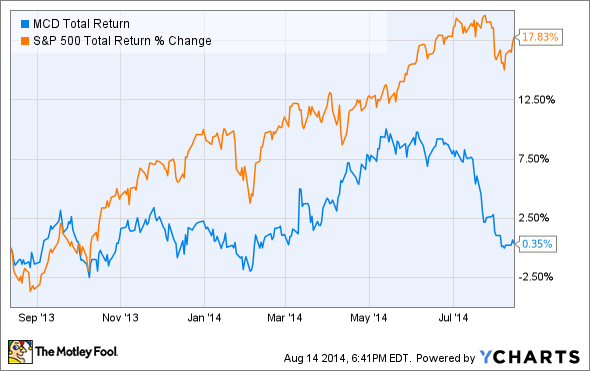 McDonald's CEO Donald Thompson even admitted in the latest earnings conference call that there's "no one silver bullet or single solution for driving sustained growth." But he also went on to say, "The key to our success over time has been that we've executed multiple initiatives simultaneously ... as we focus on those areas within our control to enhance our relevance and appeal to consumers."

So how, exactly, is McDonald's helping shareholders by making Happy Meals healthier?

But perhaps most notably, this also helps appease health experts and parents alike, who have increasingly put pressure on the global fast food behemoth in recent years to offer more health-conscious options amid a clear paradigm shift toward healthier food. This, in turn, will undoubtedly boost consumers' perception of the McDonald's name, and is a clear step in the right direction given Thompson's insistence that "We are taking meaningful action to become even a more respected brand."

That's also not to say that McDonald's work is done. It has had trouble, for example, getting kids excited about vegetables: A trial of baby carrots in Happy Meals failed badly several years ago, despite shaping the carrots like characters, according to USA Today.Then again, that's also a battle with which many parents can already identify, which means they would also be more likely to forgive a lack of options at McDonald's for the little ones.

In any case, it seems evident McDonald's is intent on pushing forward with healthier food. If McDonald's can do it right over the long-term, it's a push that could benefit everyone involved.