Though the auto industry may be cyclical, automaker Ford (NYSE:F) and its now-former CEO Alan Mulally deserve a pat on the back considering how much of a 180 the company made over the past decade.

Over that time period, Ford moved from being a struggling domestic automaker to a thriving global brand. It's relied on technological innovations to add luxuries to the cabins of vehicles and improve gas mileage, while also managing to keep prices at attractive levels for its consumers. The Mustang, for example, remains about the best bang for your buck among vehicles with 300 horsepower that you can buy for under $30,000.

In addition to sleek styling and innovation, Ford also has done a marvelous job at retaining customers. According to Polk Automotive, a subsidiary of IHS Automotive, Ford has been the top name for automotive brand loyalty for four years running. It's a testament to the company's pricing and design, as well as the improving reliability and value of its vehicles. 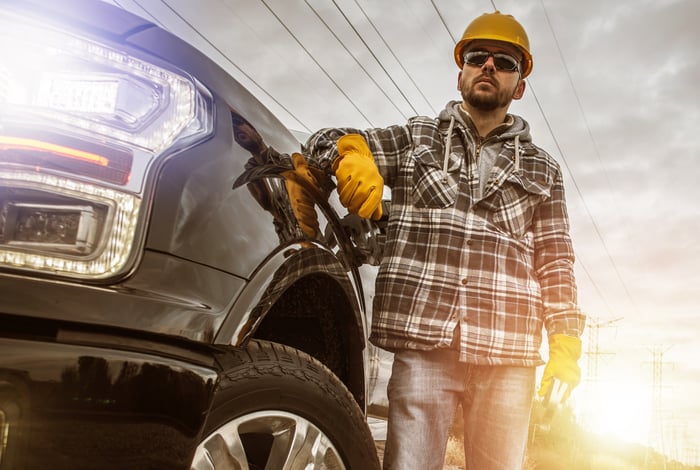 With the exception of a few months here and there over the past couple of decades in which it may have ceded the top spot, on an annual basis its F-Series pickup line has been America's best-selling truck for 37 straight years, and America's best-selling vehicle period for the past 32 years! That's a dominant performance considering the dozens upon dozens of other vehicles that consumers have to choose from. Yet, it's also a ton of pressure placed on Ford's management team to maintain its position atop the mountain in each successive year.

In 2013, Ford saw sales of its F-Series catapult higher by 18.3% to 763,402 units, a gain of more than 118,000 pickups from the prior year. Perhaps even more impressive is the fact that F-Series sales accounted for 81% of all Ford brand truck sales, 32% of Ford's total domestic vehicle sales in 2013, and almost single-handedly outpaced the 793,279 Ford brand cars sold during the year.

Five states critical to Ford's F-Series
Ford has made some smart strategic moves with its F-Series pickups when it comes to design, fuel efficiency, hauling capacity, and price. Last year's sales data tells that story clearly. But for investors in Ford, it pays to dig deeper in order to understand what it is about the F-Series that makes consumers buy. If investors can understand the driving force behind the demand for F-Series, then they'll have a better read on the pickup line's growth potential.

With that end in mind, I approached Ford this past week with the idea of uncovering which five states generated the greatest number of F-Series sales last year -- and the company graciously obliged. Based on Polk Automotive's total registration data from each state, here are the five that generated the greatest number of new F-Series registrations in 2013:

Three industries fueling F-Series growth
A quick observation of the above data is that Ford's five most important states comprised nearly 35% of total F-Series sales last year. That's a sizable chunk of change, making these markets critical to Ford's success. But what is it about these markets that attracts consumers to the F-Series?

The common perception is that inclement weather or rugged terrain would be the primary driver of pickup sales. The truth, though, appears to lie with increasing demand from three industries.

In Texas and Oklahoma, and even in Pennsylvania, expansion of the oil and gas industry as well as other energy projects, including renewables, has created strong demand for F-Series pickups.

As my Foolish colleague Matt DiLallo pointed out in October of last year, fracking -- the processing of injecting high pressure fluids into the ground in order to fracture rock and retrieve oil or natural gas -- in the shale regions of the Midwest and Pennsylvania has yielded an incredible demand for pickups. When considering hauling capacity and terrain, four-wheeled pickups are sometimes the only viable solution for workers to get to a wellhead. As Ken Czubay, Ford's VP of U.S. marketing noted at the time, "[W]hen we look at areas in West Texas, the northern plains, the Dakotas, and even Pennsylvania where fracking is big, we're also seeing big demand for the F-Series."

I'm sure California's population headcount does play some role in its No. 2 ranking in terms of total sales, but this state's story is really about agriculture more than anything else.

It's an oft-forgotten fact, but California is the leading agricultural producer in the U.S., and it has been so for the past 50 years. According to Mother Jones, California is responsible for 99% of all almond and walnut production in the U.S., 95% of all domestic broccoli, 92% of all strawberries, 91% of domestic grapes, and 90% of all tomatoes. Farmers in California looking to transport their produce to market just might be turning to F-Series pickups in greater numbers.

Finally, for states like Florida and California, which were hit hard during the recession and are now seeing home prices soar, a rebounding housing construction market appears to be playing a vital role.

According to home research and sales experts Zillow, Florida home values have risen an average of 14.2% over the past year and are projected to rise by 5.7% within the next year. Dangle that carrot in front of a bunch of investors and contractors, and you're liable to have a very active need for pickups!

Why this data matters
Now that we have a better understanding of some prominent F-Series sales drivers, let's talk about why this matters in the first place.

For Ford investors, it means keeping a close eye on the state of the oil and gas industries, the agricultural market in California, and construction capacity in Florida.

Fracking, for example, is highly controversial because there are concerns that the highly pressurized water being used to retrieve oil and gas could pollute nearby water supplies and cause other environmental damage. While these fears haven't reduced the demand for fracking, the potential for regulation of fracking activities is a headwind that should be on all Ford investors' minds.

In California, though, the concerns expressed by drought-ridden farmers are very real. With 58% of California in a state of "exceptional drought," the highest level possible on the U.S. Department of Agriculture's drought monitor, it's quite possible that agricultural output could decline in the coming months. While that's unlikely to affect sales this year, a lack of extra income next year could adversely impact F-Series sales.

The one caveat, however, is crop insurance. A good chunk of U.S. farmers are covered by crop insurance, which can step in and supply farmers with lost income caused by natural disasters, including drought. In other words, drought may not spell doom for Ford in California just yet.

The construction market appears healthy for now, as evidenced by rising home prices across the U.S. The big question remains how homebuyers will react once the Federal Reserve begins inching up interest rates as early as next year. If rates begin to rise quickly, it could close the door on prospective homeowners and dramatically slow housing construction. Since construction companies are purchasing F-Series trucks for their hauling capacity it could lead to a slowdown in sales if this were to occur.

The bottom line
Despite being America's best-selling vehicle, there are clearly obstacles the F-Series will have to overcome in the coming years -- but that doesn't mean Ford isn't up for the challenge.

Innovation remains the key driver in sales of its F-150, easily the most popular vehicle among its F-Series line. Just this year, Ford introduced new EcoBoost engine options which sip rather than guzzle gasoline, but also have turbochargers built in to give the driver ample power when needed. The end result is improved gas mileage and lower expenses for the consumer.

Ford has overhauled the body of its yet to be released 2015 F-150, replacing it with an aluminum-alloy body, which dropped the weight of the truck by about 700 pounds. Although this is a nice fuel saver, the real advantage is that any of the above-named industries that are looking for extra hauling capacity can beef up their trucks with a number of other options without really adding any weight from prior-year models.

It's these little factors that make the F-Series truck such a pillar of success for businesses -- and a reason I suspect it'll remain America's best-selling vehicle for many years to come.