A growing franchise portfolio and expanding margins in a key area of the business should bode well for long-term investors.

Among the major Hollywood players, no company is doing more to woo fans than Disney (DIS 1.60%). You can see it in the results. Fiscal third-quarter revenue improved 8%, while per-share earnings shot up 24% to $1.28, a new record. Disney stock is also up, handily beating the market over the past year. 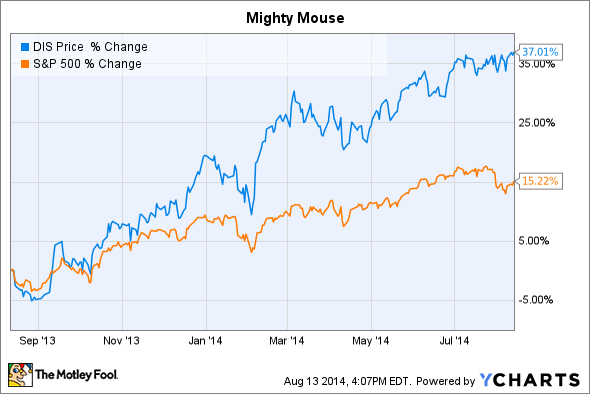 Can the good times continue? At 23 times earnings, Disney stock doesn't come cheap. But with a growing inventory of pop culture properties boosting margins and profits at an accelerated rate, the premium seems to be worth it.

Disney's newest franchises include Guardians of the Galaxy, a space adventure starring lesser-known Marvel characters. It's thrilled audiences to the tune of an estimated $222.3 million in domestic grosses through Sunday, putting the movie on pace to challenge Transformers: Age of Extinction for this summer's U.S. box office crown.

Worldwide, Guardians of the Galaxy ended the weekend having earned $418.7 million according to Box Office Mojo -- on track to outpace even my optimistic predictions. April's Captain America: The Winter Soldier earned $714 million globally. In just six years, Marvel has become one of Hollywood's most bankable box office brands.

Guardians of the Galaxy is the latest in a string of new Disney franchises. Credit: Marvel Entertainment.

But there's also more to Disney than Marvel's superheroics. The House of Mouse's best franchise may, in fact, be Frozen, an animated tale of adventure about two sisters and the journey to bridge the rift between them. According to Rotten Tomatoes, the film scored well with both critics (89% fresh) and audiences (87% fresh).

Commercially, Box Office Mojo says Frozen earned $1.27 billion at the worldwide box office. But fans didn't stop there. According to The-Numbers.com, the film added another $249.2 million in high-margin home video sales. Mix in rides, toys, and related merchandise and the adventures of Anna and Elsa may end up as the most profitable organic franchise in Disney history.

The model everyone wants to emulate

Related products have become an increasingly important part of Disney's business. Licensing and merchandising deals with the likes of Hasbro for toys and Electronic Arts (NASDAQ: EA) for video games are bringing more to the bottom line with each passing year:

Other studios are aiming to cash in similarly. Look at Lions Gate Entertainment (LGF-A -1.91%), which is commissioning video games based on characters for which it owns the on-screen rights. Or how about Activision Blizzard (ATVI 5.62%), which is cashing in on the Skylanders franchise by finding homes for those characters in other media. In each case, they're trying to do what Disney has already done with most of its franchises.

A brand with staying power ...

It's important to remember that we're also still seeing what Star Wars can do to aid in sales across Disney's various divisions. Fiscal Q3 operating income for Consumer Products was largely driven by strong sales of Frozen merchandise.

Looking at results for the full nine-month period ended in June, Disney's 10-Q report from earlier this month cites a "full period of Lucasfilm" as a catalyst. That's interesting, because we're about to see new Lucasfilm properties. The animated series Star Wars: Rebels screens in October on Disney XD. Hasbro was selling entire playsets based on the series at last month's Comic-Con in San Diego. 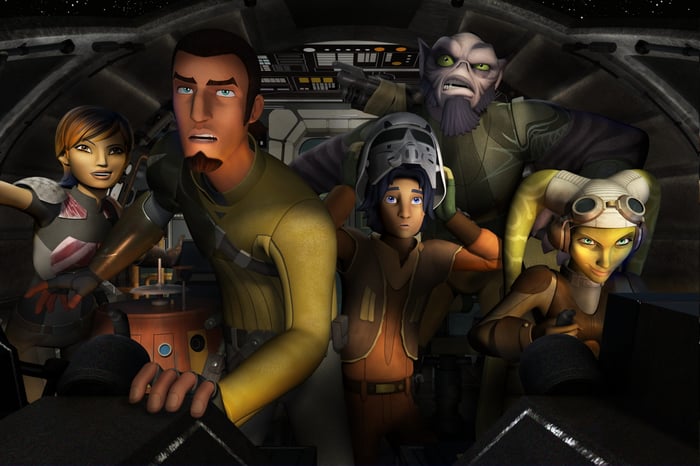 Her Universe founder Ashley Eckstein -- also known as the voice of Ahsoka Tano in the animated series Star Wars: The Clone Wars -- said her company set a new sales record during Comic-Con. Her Universe makes and markets geek-themed clothes and accessories for girls using popular brands. Star Wars-themed items appeared to be among the biggest sellers at the Her Universe booth.

... And a stock worth sticking with

If that seems extraordinary, consider that earnings from continuing operations were up about 120% on an annualized basis over the same period. Disney stock isn't growing much faster than the underlying business is improving. So as long as this trend continues -- and since we're at the early stages of understanding what the Star Wars franchise can do, I think it will -- Disney stock remains one to buy to hold for the long term.

Tim Beyers is a member of the Motley Fool Rule Breakers stock-picking team and the Motley Fool Supernova Odyssey I mission. He owned shares of Walt Disney at the time of publication. Check out Tim's web home and portfolio holdings or connect with him on Google+, Tumblr, or Twitter, where he goes by @milehighfool. You can also get his insights delivered directly to your RSS reader.