We have come to a clear realization of the fact that true individual freedom cannot exist without economic security and independence. "Necessitous men are not free men." -- Franklin D. Roosevelt

These words ring just as true today as they did more than 70 years ago when Roosevelt uttered them in his 1944 State of the Union address, especially as the economic recovery -- jobs recovery in particular -- continues to drag. There's been good news: The unemployment rate finally reached pre-recession levels this year, holding steady at 6.2%. The total number of Americans employed is over 139 million, continuing a trend of slight improvements, and well ahead of the 138.3 million pre-recession peak from January 2008.

But like all things statistical, context and trends are important, and like all things macroeconomic, it's never just one thing that matters. Most importantly, when it comes to jobs, national averages and trends don't matter very much if you're on the outside of the labor market looking in. Let's take a closer look at the big picture, and drill down a little bit. Despite the sluggish jobs recovery, and wage stagnation that's been part and parcel with the recovery, there are a few bright spots.

We do know that 2.3 million of the private-sector jobs added since 2010 are low-paying retail and hospitality work. For context, a job with an average hourly wage of $15 per hour, if it's the sole income for a family of four, puts that family only 35% above the poverty rate. That's assuming the worker gets 40 hours every week, which isn't often the case in low-paying retail jobs.

It's also important to understand what "poverty" means. According to the U.S. Census Bureau, poverty is the measure of income required to meet basic needs. In other words, food, shelter, clothing, and essentially nothing else. Forget savings or retirement. Toss out vacations, or a new (or used) car. In short, those $15 per hour jobs may be 35% above the poverty level for a family of four, but they still offer far, far less than the average income for an American household. In turn, that could perpetuate the slow economic recovery, almost like a hamster wheel for low-wage job creation.

Anything below $24 per hour -- assuming a 40 hour work week -- is below the median U.S. household income. In short, the majority of new jobs created since the 2010 jobs market bottom pay less than average wages. Whether this will lead to the labor participation rate staying at current levels for the long term is unclear, but the U.S. Bureau of Labor Statistics projections for job growth over the next decade don't paint a rosy picture: Only one of the five jobs with the most projected growth in positions paid more than $21,500 in 2012.

Here's a look at the jobs picture in key sectors since 2008: 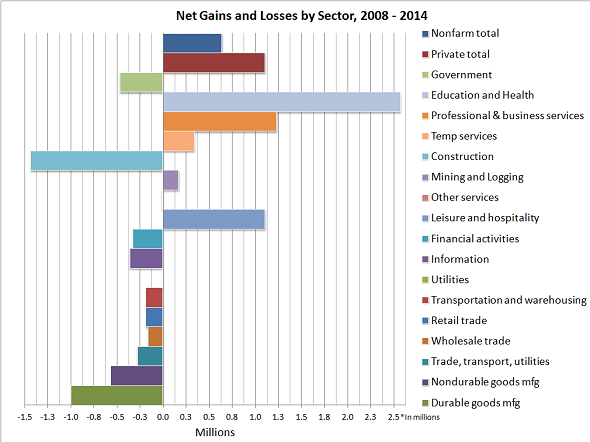 While there are more total jobs today than before the recession, the mix of jobs has changed. Manufacturing -- declining for decades -- is more than 1.5 million jobs below pre-recession levels, and the construction industry has given up just as many. Government payrolls are down a half-million, though that isn't an accurate representation of government workers, as it excludes contractors, which have taken on a larger role in recent years. 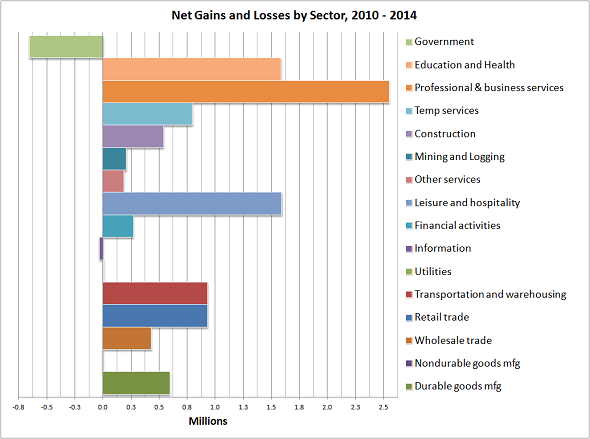 From the low point in the recession, nearly 10 million net workers have been added, even as some sectors -- most notably government employment and some kinds of manufacturing -- have continued to shed jobs. And while it is good that so many jobs have been created, the issue -- again -- lies with the kinds of work that are available.

Nearly 7 million jobs that pay below median income levels have been created, while less than 5 million jobs paying at or above the median household income have been created at the same time. Of the 11.9 million new jobs created in the sectors which have added jobs, fully one-third of those jobs pay less than $16.50 per hour. Here are the average wages by sector: 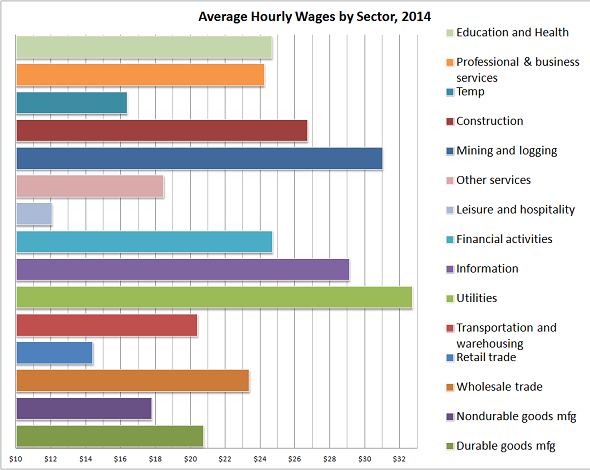 Bucking the trend with energy?
It's tough to predict with any real accuracy, but there are some positive trends. Some manufacturing is showing growth -- especially operations that are energy-intensive or use a feedstock like natural gas, ethane or other natural gas liquids. Dow Chemical and BASF, two of the largest chemical companies in the world, have both committed to billions of dollars in U.S. manufacturing expansion, almost exclusively on the back of cheap domestic natural gas and natural gas liquids supply and prices. The jobs created by these efforts can pay upwards of $30 per hour on average.

This little molecule -- ethane -- could lead to half a million manufacturing jobs in the U.S.

This same trend is driving the growth in the mining and logging segment, as domestic oil and gas producers continue to increase output and add jobs that on average pay between $28 and $39 per hour. Since peaking in 2006, the U.S. has been slowly reducing its net imports of oil, and last November, actually exported more oil products than were imported for the first time in almost 20 years. Proved oil and gas resources indicate somewhere around 100 years of supply at hand, meaning that these job gains are likely to be sustained. Factor in the massive investments in expanded domestic manufacturing -- as much as $100 billion already committed by some estimates -- and there are some potential bright spots going forward.

No easy answers, but it could be worse
I know that's not much consolation if you're one of the hundreds of thousands of long-term unemployed, but the reality is, there's not one simple answer to how to -- or what will -- spark higher paying job creation, outside of economic demand. With that said, this recovery isn't pretty, but it's the one we've got.