Investors in Broadcom (NASDAQ: BRCM) have enjoyed a very nice 28% gain in their investment year to date. Though there are plenty of reasons to be bullish (in fact, I think the stock has much more room to run), there's always both a bullish and a bearish case to be made, and bulls and bears alike benefit from understanding both sides of the story. With that in mind, here are three reasons Broadcom's stock could fall from current levels.

Broadcom's higher end connectivity business could be at risk
When Broadcom announced it would be exiting the cellular business, one of the major concerns voiced by many was that not having a full cellular platform would put it at a disadvantage in its connectivity chip business.

In fact, Broadcom's management -- when it still intended to go after this market -- emphasized how important having the complete platform was in order to be a viable supplier to the low end of the mobile market. Driving this point home is the following statement from CFO Eric Brandt at a Morgan Stanley conference:

On the low-end of the market and that's where I think last year you saw most of the growth on low-end of smartphones, those really are a platform sell. And so to the extent that you are not in the baseband part of that business you are not going to sell the connectivity. 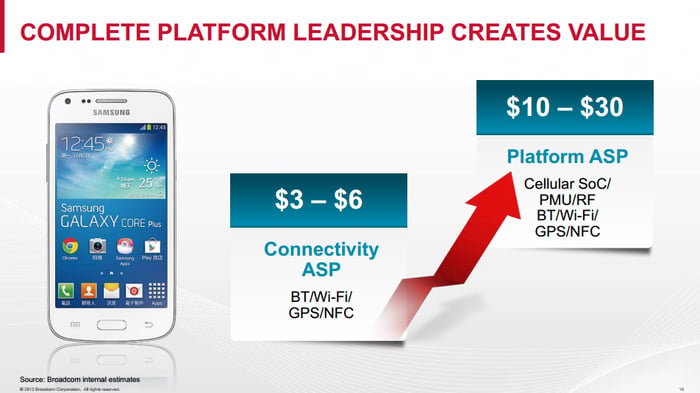 Though management has emphasized that it is primarily the low end of the market that is at risk as a result of the cellular divestiture (Broadcom sees this business as being worth between $500 million and $800 million in annual sales) the company's position at the high end of the connectivity chip market -- though impressive -- is not invulnerable.

Since then, Qualcomm been very aggressively investing in its low-power connectivity technology for mobile devices. Though it has seen little success to date in displacing Broadcom in "hero" devices, Qualcomm has been highly successful at the low end of the market, noting on its recent earnings call that its Wi-Fi chip shipments are on track to grow over 40% this fiscal year.

Further, while Qualcomm today offers discrete connectivity chips alongside its high-end applications processor and modem platforms, even the high end may eventually move to solutions where the connectivity is integrated with the apps processor and modem. In this case, assuming competitive technology from Qualcomm, Broadcom would have a tough time winning that battle.

Infrastructure and Networking could see growth slowdown, slight margin compression
One of the biggest success stories for Broadcom's business has been its Infrastructure and Networking operating segment. The success this year, according to management, has been driven approximately two thirds due to data center related sales and about a third from telecom service providers.

The business has seen pretty phenomenal growth year to date, with the first and second quarters registering 34.6% and 24.5% year-over-year growth, respectively. Further, in the most recent quarter, the operating segment saw operating margins just shy of 40%.

Offsetting this good news, though, is that even in light of the very impressive share gain and secular growth story Broadcom has experienced to date, these kinds of growth rates are unlikely to be sustainable.

Further, with Broadcom's cellular business wound down, management has expressed a desire to increase operating expenses in this division. This is a potential long-term positive in that it could lead to even greater revenue growth down the road, but management has indicated that 40% operating margin in the Infrastructure and Networking business is probably not the long-term target.

Though Broadcom has been outgrowing the market (and CEO Scott McGregor, on the company's most recent call, "expects to continue to outgrow peers"), there have been early signs that the competition may get tougher. For instance, Intel (NASDAQ:INTC) recently picked up LSI's Axxia team and IP, which could, over time, enable Intel to become a very formidable network chip player.

Competing with Marvell, Cavium Networks, and Freescale -- whose combined market capitalizations is actually smaller than Broadcom's -- is one thing. Going up against Intel over the long haul is another thing entirely.

Do keep in mind, though, that Broadcom's technology in this space is top notch, and it would be very difficult for even Intel to put together the breadth and depth of networking related solutions Broadcom has. Further, any direct threat from Intel in a number of areas is likely years away, but this is something long-term investors should keep a close eye on.

Foolish bottom line
Though Broadcom has managed to address quite a lot of what Wall Street seemed to be unhappy with, as with any business, risks and challenges remain. Broadcom will need to move quickly to stay ahead of Qualcomm in its connectivity business, and the secular trends in the Infrastructure and Networking business will need to remain robust (and the competitive environment favorable) in order to drive some of the very impressive profit growth investors have seen in this critical business unit.