Since the lows of the Great Recession in 2009, few companies have made as spectacular a comeback as Las Vegas Sands (NYSE:LVS). The company that was once on the brink of bankruptcy is now the world's largest gaming company by market cap and revenue and the market leader in Asia. 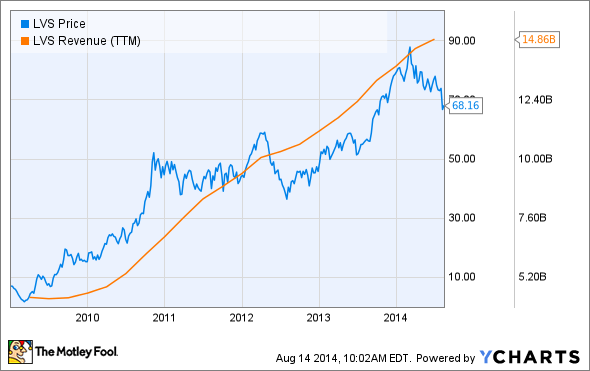 There's no guarantee any stock will rise long term, but these are the three drivers of Las Vegas Sands' long-term stock growth.

The gaming market in Macau has long been dependent on VIPs, high rollers who have accounted for around 70% of revenue. VIPs can be a fickle market in Macau because limitations on visas, crackdowns on corruption, and fears of an economic slowdown in China have all reduced demand from VIPs in the past. The good news is that Las Vegas Sands is moving its focus to the mass market of Asian gamblers.

The mass market is proving to be a big growth market for Macau as the Chinese middle class grows and infrastructure in Macau improves. A high-speed train from Guangzhou to Macau, increased ferry ports that serve Hong Kong, and even an underwater road to Hong Kong are making it easier for middle- to upper-class gamblers to reach Macau.

Las Vegas Sands is taking advantage of the mass market growth through its dominant position on Cotai, the area of reclaimed land in Macau that is a gaming and entertainment district. As you can see above, the company has three major resorts operating on Cotai, with another -- The Parisian -- under construction.

Cotai is attracting mass market gamblers because of its thousands of hotel rooms, entertainment options, and gaming. With a central location in the area, Las Vegas Sands is positioned to grow along with the mass market.

One of the often-overlooked strengths of Las Vegas Sands is its Marina Bay Sands resort in Singapore. The property is highly profitable, and it's 100% owned by Las Vegas Sands, unlike Sands China, in which it holds a 70.2% stake.

Results have been choppy at Marina Bay Sands over the years, in part because bad luck has hit the resort. Casinos expect to win a certain percentage of the bets made, which I discuss in detail here, and when results stray from that percentage quarter to quarter, it can result in volatile EBITDA (a proxy for cash flow), as you can see below. For example, win from VIP play, which is expected to be 2.7% and 3% of rolling chip volume, was 2.53% in Q2 2013 and 3.45% in Q2 2014.

But even with volatile results, Marina Bay Sands in Singapore is still highly profitable and even in an unlucky quarter is generating over $250 million in EBITDA. 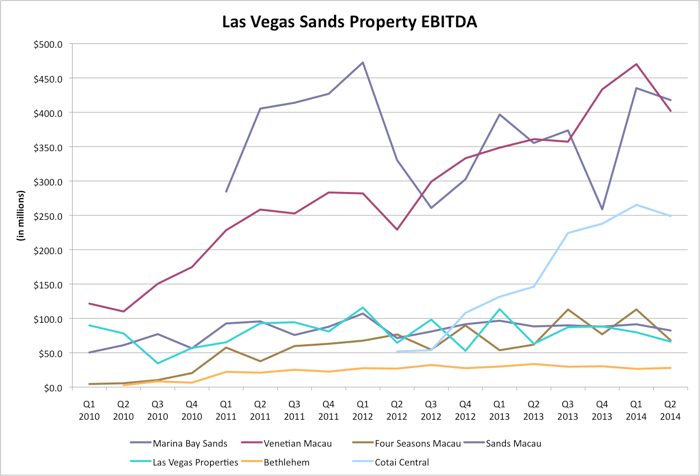 I think there's potential for long-term growth at Marina Bay Sands, but even if there isn't, the property spits off cash like crazy. That is helping to improve Las Vegas Sands' balance sheet and dividend. Long term, this is a property investors want to own -- and it could drive the stock higher.

The gaming industry is just starting to penetrate an Asian market with over 3 billion eager gamblers just a six-hour flight from Singapore and 3 billion a five-hour flight from Macau. But we may just be at the beginning of the region's growth.

Japan has long been looking to gaming as a potential revenue generator, and Las Vegas Sands would be one of the favorites to win a gaming bid there. Korea has also been discussed as a growth opportunity, and Las Vegas Sands' management would likely be willing to spend billions to build there.

Asia's economy continues to grow, and as it does, consumers want to gamble and be entertained, which is what Las Vegas Sands does best. It already has a presence in Macau and Singapore, two of the industry's most coveted gaming regions, and could add more in coming years as gaming opens up. No matter what, Asia's long-term growth will drive results for Las Vegas Sands.