Pfizer (NYSE:PFE), arguably the preeminent pharmaceutical company in the world, continues to pump out billions in free cash flow annually, deliver delectable gross margins, and pay out an annual dividend that puts the S&P 500 average yield of 2% to shame.

Yet, if you've been a shareholder in Pfizer over the past 15 years, and didn't purchase Pfizer stock during the Great Recession, things haven't been so great from a share price perspective. 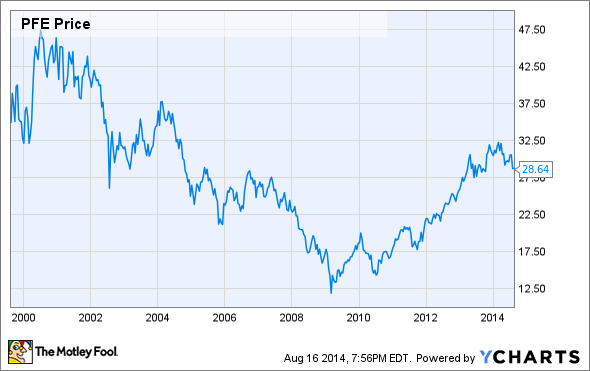 The reason for this is Pfizer's ongoing transition from legacy drugs, for which it continues to lose patent exclusivity on, to a number of new compounds. This multi-year transition has certainly led to a number of bumps and potholes in the road, as evidenced by the company's second-quarter results.

For the quarter, which was reported three weeks ago, Pfizer delivered $12.77 billion in sales, down 2% from the prior-year period, as adjusted profit per share rose 4% to $0.58. A robust share repurchase program continues to play a big role in boosting its EPS. As noted by CEO Ian Read, "I continue to see Pfizer as well positioned to effective execute on our strategy to further strengthen each of our businesses on a global basis and deliver value to all of our stakeholders."

But, Pfizer might be about to ditch its old persona and reward shareholders in a big way. Unfortunately you're not often going to find the nature of the catalysts that could lead this move higher by scratching at the surface in an earnings report. You need to be able to dig below the surface to get at what factors could be the basis of a strong rally in Pfizer's stock. Today, we're going to take a closer look at three such catalysts.

However, before we do that I should make one thing clear: the stock market is a two-way street, and stocks can just as easily go down as they go up. Even with a bullish thesis on paper external and even internal factors can arise which could pressure Pfizer and send its share price lower. So keep that idea in the back of your mind as you're reading this optimistic view on Pfizer. Palbo-mania
Though Pfizer has an extensive pipeline with a number of exciting existing and upcoming products, including fibromyalgia drug Lyrica which grew sales by 15% operationally during the quarter to $1.32 billion and remains its best-selling drug, as well as Xalkori and Inlyta, two of its oncology drugs which grew operational sales by 59% and 42%, respectively, experimental compound palbociclib remains a cornerstone to its potential success.

Palbociclib, hereafter known as palbo, is the company's first-line estrogen-positive, HER2-negative breast cancer drug given in conjunction with Novartis' Femara that dropped investors' jaws in 2012 when Pfizer, during a planned interim analysis, announced that it produced a median progress-free survival of 26.1 months, more than triple that of the Femara monotherapy arm at 7.5 months.

It was this data which helped Pfizer earn the breakthrough therapy designation from the Food and Drug Administration for palbo in April 2013. If you recall, the breakthrough designation allows companies to submit game-changing drugs for approval utilizing earlier-stage data if the trial data demonstrates a marked improved over the current standard of treatment.

This year Pfizer released additional data on palbo, showing that palbo in combination with Femara produced a progression-free survival improvement of 10 months (20.2 months versus 10.2 months) compared to Femara alone, and that overall survival improved by 4.2 months to 37.5 months from 33.3 months in the Femara control group. Though this secondary endpoint of overall survival didn't qualify as a "significant" difference, the strong progression-free survival numbers should help make palbo a strong candidate as a first-line drug in ER-positive, HER2-negative patients. With peak annual sales estimates ranging from as low as $3 billion to originally as high as $9 billion when its interim analysis came out in 2012, it would appear that Pfizer is readying to unleash a monster onto Wall Street within the next couple of quarters.

Merger and acquisition activity
If Pfizer made one thing very clear during its second quarter earnings conference call, it's that it remains actively on the hunt for acquisition and/or merger opportunities.

There are a number of reasons why an acquisition could make a lot of sense for Pfizer, and why it could be a boon to its share price. First, acquisitions could complement its existing product portfolio, offering instances where combo therapies might make sense, and also providing a spark of growth that's been largely missing while a number of Pfizer's key drugs have been losing exclusivity.

Perhaps more importantly, and why investors were so intrigued by its thus far unsuccessful pursuit of U.K.-based AstraZeneca, is the potential for Pfizer to utilize corporate tax inversion to its advantage by purchasing an overseas company and relocating its headquarters to that country.

Peak marginal corporate tax rates in the U.S. are among the highest in the world at 40%. If Pfizer can find an overseas acquisition target which meets the corporate tax inversion criteria, it could, in theory, dramatically lower its tax rate, saving the company hundreds of millions in profits annually.

Look for M&A activity to be a near-term catalyst.

Shareholder perks
Finally, and though this is no different from Pfizer's existing strategy on the subject, shareholder perks could help push its stock higher.

Pfizer's management understands that growth has been subpar the past couple of years as key drugs have lost exclusivity, and it's done its best to buoy the company's share price with a number of shareholder incentives. As Pfizer's growth prospects begin to shift with the likely approval and launch of palbo and the continued improvement of core drugs like Lyrica, Enbrel, Xalkori, and Inlyta, it's possible these shareholder incentives could really pack a positive punch for investors.

Pfizer has repurchased $2.9 billion worth of its own common stock through the first half of 2014 and has plans to purchase roughly $5 billion this year. This aggressive buyback campaign follows the $16.3 billion in stock purchases in 2013. By repurchasing its shares Pfizer reduces the outstanding share count which net income is divided into, thus boosting the company's EPS and making it appear more attractive to Wall Street and investors. 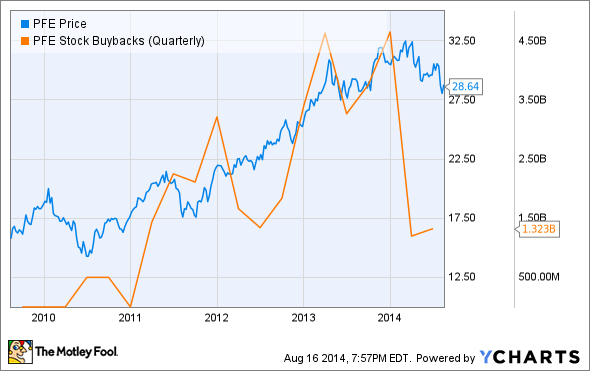 And don't forget that Pfizer's current dividend yield of 3.5% handily trounces what you'd find in a bank, credit union, or even with a U.S. Treasury bond at the moment.

As highlighted during its conference call, Pfizer has returned $53 billion in buybacks and dividends to shareholders just between 2011 and 2013. Look for this aggressive share repurchasing and dividend growth to continue in the near future.

Tying everything together
Despite being a company in transition there are a handful of key catalysts which look poised to push Pfizer's stock higher. A successful launch of palbo, a well-orchestrated merger or collaboration, as well as ongoing share buybacks and dividend increases could be the perfect formula to reignite growth in Pfizer's top and bottom line and send its stock significantly higher.