Next to prostate cancer in men, breast cancer lands as the second most-prevalent cancer diagnosis in the United States, with nearly 235,000 estimates cases per year, according to the American Cancer Society. Breast cancer is also the second deadliest type of cancer, behind only lung and bronchus cancer and slightly ahead of prostate cancer, based on statistics from the Centers for Disease Control and Prevention. 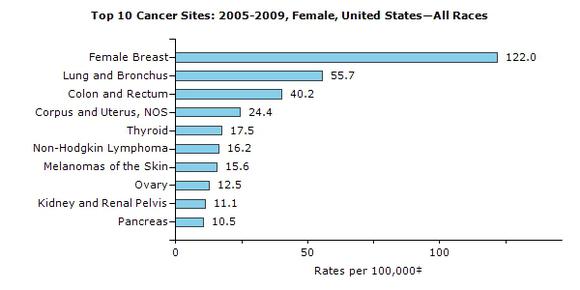 From 1975-1977 to 2002-2008, five-year survival rates have improved from 75% to approximately 90% as more preventative actions and screenings, as well as a reduction in menopausal hormone therapies, have done their part to improve longevity.

Also playing a role in prolonging and improving patient quality of life are a number of drugs to target cancer cells in later stages of the disease.

The go-to therapy
There is perhaps no bigger player in any cancer field than Roche (OTC:RHHB.Y). Roche offers patients and investors an enormous pipeline of products headlined by Herceptin, its HER2-positive protein inhibitor, which is approved in metastatic breast cancer as well as in early-stage therapy as a primary treatment. In 2013, Herceptin brought in the equivalent of $6.9 billion in sales, a 6% increase from the previous year.

In addition to Herceptin, Roche's Perjeta was approved by the Food and Drug Administration in 2012 for metastatic HER2-positive breast cancer, as well as for use in preoperative breast cancer last September -- the first drug of its kind to gain this designation. Sales of Perjeta hit $369 million last year and look well on their way to achieving blockbuster status.

But more treatment options are necessary, and one drug may provide a new option if it gets the FDA's green light.

The one experimental therapy you need to know
While the aforementioned Herceptin and Perjeta target HER2-positive patients, the dominant type of breast cancer is ER+ (estrogen receptor positive), HER2-negative, comprising about 60% of all those diagnosed. The potential answer to this large group of breast cancer sufferers could come in the form of a pill from Pfizer (NYSE:PFE) known as palbociclib.

Palbociclib burst onto the scene a little more than a year ago, after Pfizer presented phase 2 data at the 2012 San Antonio Breast Cancer Symposium demonstrating that palbociclib in combination with Novartis' (NYSE:NVS) Femara had more than tripled progression-free survival in its study compared with the control arm on Femara alone (26.1 months versus 7.5 months). Not long thereafter, in April, Pfizer's therapy was granted the highly coveted "breakthrough therapy" designation.

Palbociclib itself is a drug that selectively inhibits cyclin-dependent kinases 4 and 6, which help regulate the transition of cells from their growth phase to DNA replication. In studies, CDK 4 and 6 are often overexpressed in breast cancer patients; therefore, the combination of palbociclib's CDK 4 and 6 inhibition with Femara, an aromatase inhibitor (i.e., estrogen-suppressing), should help reduce cancer cell proliferation and improve progression-free survival.

In February of this year, we received a more subtle indication of palbociclib's high-performance effects on treating cancer. In the release of its top-line results from the PALOMA-1 trial in early February, which is evaluating palbociclib and Femara in women with ER+/HER2- locally advanced or newly diagnosed metastatic breast cancer, Pfizer noted a "statistically significant and meaningful improvement in progression-free survival" for the palbociclib/Femara arm.

Specific data from its PALOMA-1 trial hasn't been released yet, but it's served as more than enough fuel for investors to assume that Pfizer may use this data, assuming it's on par with its prior phase 2 data, to seek an early approval from the FDA. Were Pfizer to do so, it would be following in the footsteps of Pharmacyclics (NASDAQ: PCYC) which did the same thing by utilizing mid-stage data from its breakthrough designation for ibrutinib (now Imbruvica) to gain early approval as a blood cancer therapy.

On top of the PALOMA-1 study, Pfizer has two other phase 3 studies under way: PALOMA-2 and PALOMA-3. PALOMA-2 is a study of the previously mentioned combo of palbociclib and Femara, but as a first-line treatment for post-menopausal women with ER+/HER2- advanced breast cancer. PALOMA-3 will evaluate palbociclib in combination with AstraZeneca's (NYSE:AZN) estrogen receptor antagonist Faslodex in hormone receptor-positive, HER2- patients that progressed after prior endocrine therapy.

Long story short, there are a number of additional indications possible for palbociclib.

One potential leap for patient care, and possibly the company behind it
I believe it's just a matter of time before palbociclib gets ushered into the priority review process given its statistically significant and thus far safe and tolerable results. This drug has the potential to drastically alter the landscape of breast cancer treatment for a majority of locally advanced breast cancer sufferers and looks poised to reach blockbuster status.

With Wall Street projections calling for $6 billion in peak sales, and Pfizer pushing share buybacks as the norm to boost shareholder value, I truly believe that a mid-80% margin on palbociclib has the potential to add $1 in EPS by itself to Pfizer by the end of the decade. With Pfizer valued at less than 14 times forward earnings, it could be a bargain too cheap to pass up.