It was only a few short weeks ago that Pfizer (PFE -0.33%) delivered investors bad news in the form of a failed late stage trial for a key lung cancer drug. Now, Pfizer is back again, but this time it's giving investors new hope that palbociclib, a breast cancer treatment in mid stage studies, can power sales over the coming years.

That announcement has helped Pfizer avoid a lot of the market's recent pain over the past couple weeks. While the S&P 500 is down more than 5%, shares are essentially unchanged so far this year. 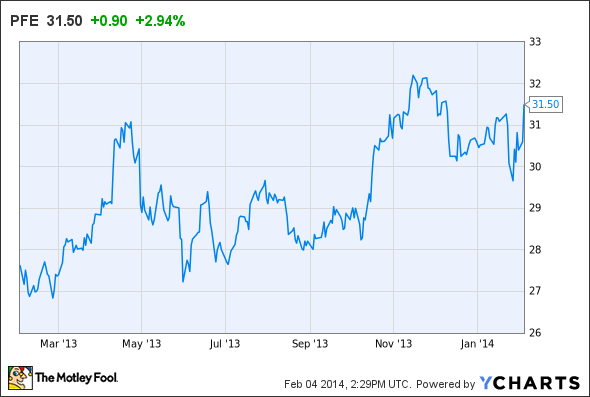 Promising palbociclib
The drug is the latest in a slate of promising oncology candidates being ushered through drug maker pipelines. Investors hope Pfizer will seek an early approval for palbociclib based on phase 2 trials showing it significantly benefited women with ER+ and HER2 advanced breast cancer. That subset makes up roughly 60% of advanced breast cancer patients.

There's no guarantee the FDA will agree to advance the time table for palbociclib. However, the drug was awarded the FDA's breakthrough status designation which ostensibly clears the way for considering approval without phase 3 trial data in hand. That has some thinking a conditional or rolling filing could be coming from Pfizer for the drug.

Winning FDA support sooner would certainly be welcome news for Pfizer, particularly given the increasingly crowded field of new cancer therapies. Novartis' (NVS 0.19%) CDK4/6 enzyme inhibiting drug LEE011 entered phase 3 trials for the same ER+ and HER2 patient population in December. Eli Lilly (LLY 1.20%), another drug maker hunting for a new blockbuster, has a CDK4/6 targeting drug in LY2835219 too. Lilly has a variety of studies under way for that drug, including a phase 2 study in mantle cell lymphoma and a phase 1 study of advanced cancer including lung, breast, and skin cancer, as well as others.

Pfizer is also seeing sales increase for its anticoagulant drug Eliquis, which is co-marketed with Bristol-Myers (BMY 0.31%), and Rhematoid Arthritis drug Xeljanz.

Thanks to a marketing push, Eliquis won business away from legacy anticoagulant warfarin last year. Pfizer and Bristol share global profits equally, but only Bristol breaks out the drug's sales separately in its earnings. Based on Bristol's fourth quarter results, Eliquis seems to be finally gaining traction against competing therapies from Johnson & Johnson and Boehringer. Bristol reported Eliquis revenue increased from $12 million in the second quarter to $44 million in the third quarter and to $71 million in the fourth quarter. That works out to $146 million in 2013 sales in its first full year.

Pfizer is also seeing growing demand for Xeljanz, which competes against blockbuster autoimmune therapies like Remicade. Prescription volume for Xeljanz grew 28% sequentially in the fourth quarter, helping sales climb to $46 million. Pfizer hopes it can grow those sales through expanding the label to include other indications like psoriasis.

Fool-worthy final thoughts
It may be a bit early to get worked up over palbociclib. There's no assurance the FDA will consider early approval and even if it does its unlikely the drug will contribute meaningfully to sales before 2015 or 2016. At that point it could also find itself in a turf battle with Novartis and Lilly. Regardless, the potential is clearly big given the World Health Organization predicts 22 million cancer cases will be diagnosed annually within the next 20 years, up from 14 million a year today.

For now, Pfizer will need sales of Xalkori, Inlyta, Eliquis, and Xeljanz to pick up the pace if it hopes to offset lower sales of Viagra, which lost patent protection in key overseas markets last year, and Enbrel, on which Amgen is no longer sharing profit on North American sales with Pfizer. That suggests investors should track their progress this year.