Some skeptics may consider LinkedIn overvalued, but the professional networker has a lot going for it to justify its premium valuation.

No matter how you slice it, LinkedIn (LNKD.DL) is a pricey stock. But that doesn't mean it can't be worth the premium. In fact, LinkedIn is worth every penny. Here's why.

Of all the social networks, LinkedIn easily has the best business with the strongest monetization strategy. Yet, it's actually the cheapest of the three major players by some valuation metrics like price-to-sales. One partial explanation for this discount is that LinkedIn's top line is growing at a slightly slower pace.

What's not shown in this table is how incredibly sustainable LinkedIn's business is since it has utterly dominated the professional niche of the social media sector.

Why LinkedIn is different
Naturally, LinkedIn relies heavily on network effects. But in this case, LinkedIn's business benefits in 2 ways as its base of registered members (currently over 313 million) continues to grow. The value proposition that LinkedIn offers to both members and corporate solutions customers strengthens as the member base grows.

As the professional networker has grown its member base by more than fourfold over the past four years, the number of corporate solutions customers has increased by 14-fold to over 28,000. 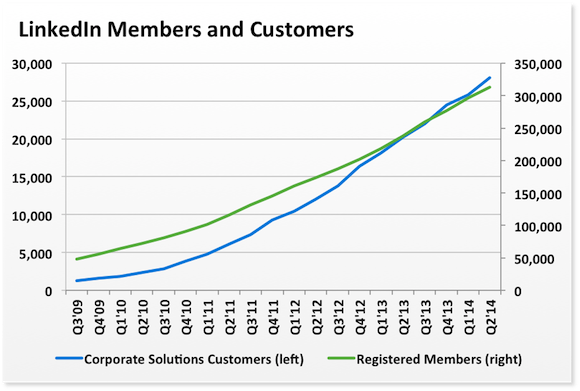 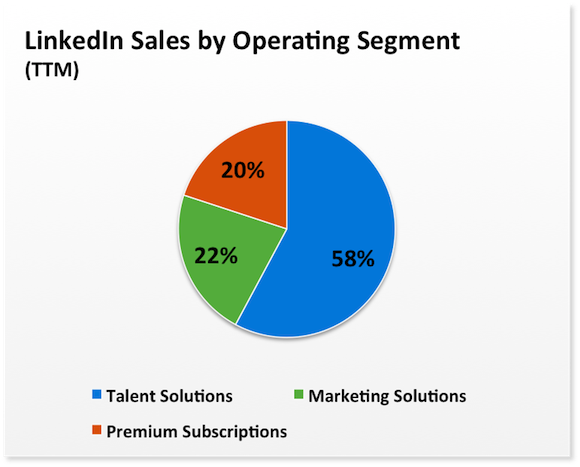 That's just one of several important differentiators that LinkedIn enjoys relative to its ad-based peers.

Another important distinction is that LinkedIn has immense growth opportunities in China, just recently launching a localized version of its site in Simplified Chinese. Meanwhile, Facebook and Twitter remain blocked in the Middle Kingdom. The company had approximately 4 million members in China in February, and hopes to grow that figure to over 140 million in the coming years. Judging by how member growth has translated into revenue growth up until now, there's a lot to be bullish on if LinkedIn can approach its full potential in China.

The advertising business is still young
LinkedIn does have an advertising business like Facebook and Twitter, but naturally there's a professional angle that it can leverage: business-to-business (B2B) marketing. That's exactly why LinkedIn agreed to acquire Bizo last month for $175 million, a player in the B2B market with proprietary data management and targeting technology catered toward advertising to professionals.

Sponsored Stories have done wonders for Facebook's business, particularly in mobile. Sponsored Updates are doing likewise for LinkedIn's marketing solutions segment as it shifts away from traditional display ads. Sponsored Updates now comprise 28% of this segment, less than a year after launch.

Right now, we're talking about a segment that has generated $410 million in revenue over the past 12 months. That's a drop in the bucket compared to the roughly $30 billion broader B2B market. The advertising business has nowhere to go but up.

To scale or not to scale, that is the question
I highly prefer companies whose cost structures exhibit operating leverage. That typically includes companies with a high proportion of fixed costs relative to variable costs. That paves the way for revenue growth outpacing expense growth, which leads to profitability expanding as the business grows.

As far as LinkedIn's fixed costs go, the majority of its infrastructure spending goes toward its data center buildout. Capital expenditures related to data centers have held back LinkedIn's free cash flow in recent years, but it's a necessary investment associated with rapid geographical expansion.

Starting in 2013, LinkedIn decided on a data center strategy that would involve building three self-managed facilities around the world over the span of three years. By shifting to self-managed infrastructure, LinkedIn will eventually save 50% on operating expenses per data center in the long-term. After the program concludes next year, capital expenditures will revert back to approximately 10% of revenue. At that point, LinkedIn's capital needs will mitigate and investors should enjoy a nice margin tailwind.

LinkedIn does face a variable cost structure around its sales channels, though. Approximately 60% of LinkedIn's revenue in any given quarter is typically generated through its offline field sales organization. Increasing the headcount within LinkedIn's field salesforce is what's driving LinkedIn's sales and marketing expenses higher, jumping 61% last year.

Since the majority of LinkedIn's revenue is still being generated through this channel, which is less scalable than its online sales channel, LinkedIn's overall operating leverage and scalability suffer modestly. Sales and marketing expense is typically about a third of revenue.

The good news is that LinkedIn's salesforce is very effective (remember the aforementioned outsized increase in corporate solutions customers?), and is largely responsible for driving recent revenue gains. Scalability implications aside, that's money well spent. The net result is that LinkedIn's business over the long-term will be quite scalable, like most Internet services, especially once its data center buildout is complete.

Foolish bottom line
None of this is to say that LinkedIn will be in the clear in the years to come. In the grand scheme of things, the broader social media sector is rather immature. Even though LinkedIn is cheaper than its peers by some measures, the whole sector's valuation is up for debate, especially as the entire sector is priced for growth.

If LinkedIn's growth trajectory gets derailed or otherwise questioned by investors, shares could get punished quite badly. They already had in fact, pulling back a painful 45% between September and May before the current recovery had taken hold. As with most growth stocks, high expectations are being priced into the stock right now, and LinkedIn will need to deliver in order to satisfy investors.

All that said, don't underestimate LinkedIn.