Dairy products are something most of us take for granted on a day-to-day basis. Milk is regularly stocked at the grocery store, butter and creams fill the shelves along with a variety of cheeses.

Behind the scenes, though, there's a massive dairy industry that produces these products and gets them on grocery store shelves. And in contrast to what you might think, Wisconsin isn't the number one dairy producer in the country.

What are Dairy Products?

Dairy products include milk and byproducts like cheese, butter, dry milk powders, whey products and frozen products. These products are sold directly to consumers, restaurants, and other food processors.

How big is the Dairy Products industry?

The dairy products industry consists of about 9.3 million milk producing cows on farms across the country. In 2013, these cows produced 201 billion pounds of milk, which was turned into a variety of products. Prices can be volatile, and the mix of products changes year to year, but based on last year's average milk price of $20/100 pounds the economic impact of the dairy industry was at least $40.2 billion at the farm level.

Fluid milk products, like you see at the grocery store, only consumed 53.0 billion pounds, or just over a quarter of all milk produced. Most milk went into making higher value products.

Cheese is literally big business, as you can see at this parmesan cheese factory in Modena. Photo credit: User Zerohund via Wikimedia.

How does the Dairy Industry work?

Dairy begins on the farm, but reaches its way to financial markets like Chicago and New York.

Production of dairy products begins with milking cows, then goes to processing that produces, milk, cheese, butter, and other products. But the pricing of these products often comes from financial markets.

Markets like the Chicago Mercantile Exchange set the market price for everything from milk to butter and cheese in standardized units. This allows farmers to sell anticipated production into the futures market to establish predictable cash flow. This is the market side of the dairy market, and gives dairy producers and buyers the ability to predict what prices will be.

Like most other commodities, little milk is actually delivered from these futures contracts, and instead is sold to local processors on a daily basis.

What are the drivers of dairy products?

The dairy industry is primarily a supply and demand driven market. The supply of cows and production from each cow set the supply, and prices adjust based on the demand in the marketplace. Surprisingly, dairy products can see large shifts in demand in bad economic times as people trade down to lower end cheese or choose other beverages over milk.

This is important because pricing for dairy products is very elastic, meaning the price can change rapidly if supply or demand change. This could be seen during the recession of 2009 after prices plummeted and many dairy farms approached bankruptcy. 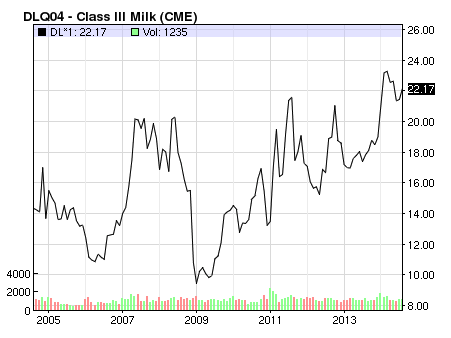 But as the economy has recovered, so have milk, cheese, and butter prices. This will lead to a more stable dairy industry -- until the next demand shock, which hopefully is a long way away.